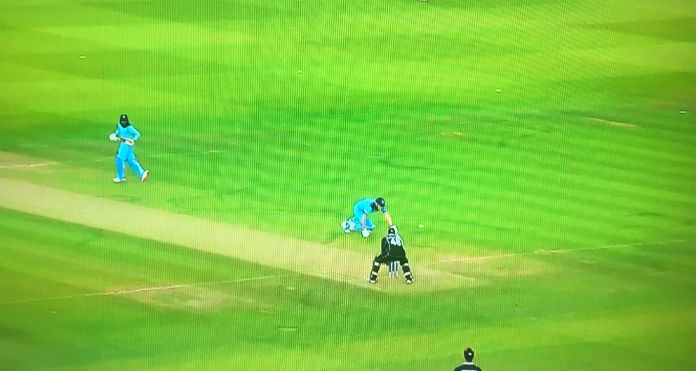 Having spent Friday and Saturday tearing my hair out over Arsenal’s inept off-season, yesterday delivered one of the greatest days of sporting action I’ve ever experienced and a timely reminder of why I bother caring about strangers kicking, throwing and hitting various sized balls.

People will ask these questions in years to come and I’ll probably have to finesse an answer to make it sound more interesting than ‘I was sitting at home in my pants simultaneously watching my TV and phone.’

In the same way that so many Gooners miraculously packed into Anfield on 26th May 1989, maybe I’ll come to realise I was actually there? It certainly felt like it at times. Even if I wasn’t wearing a blazer and tie.

Seriously, what a day.

At Wimbledon, Novak Djokovic and Roger Federer cut the Centre Court air with majestic swipes of graphite for just under five hours. Booming serves. Deft drop shots. Impossible flicks of the wrist. Nerve-shredding Hawk-Eye decisions. Have a bit of that on your strawberries and cream. It ended 7-6 (7-5) 1-6 7-6 (7-4) 4-6 13-12 (7-3) to the Serb and needed a tie-break to stop it from going all night. Just take a moment to look at that score. You need an Enigma machine to make sense of it.

Djokovic now has 15 grand slam titles to his name and has beaten Federer, who was going for his 21st, in all three Wimbledon finals they’ve faced each other in. The man is a grass-eating machine. And what can you say about the Swiss? He turns 38 in three weeks time! That’s only 18 months older than me and I can suffer a back injury just getting out of bed.

Whenever there was a break between games in the tennis, I was turning over to the cricket to keep tabs on England’s run chase against New Zealand at Lord’s. For the record, cricket is not a game that has shown me much love over the years; I once played an entire season as wicketkeeper for the school under-13s and didn’t take a single catch.

Anyway, I digress. You could smell something was cooking at Lord’s as Ben Stokes and Joss Buttler carefully steadied an England ship that looked to be sinking. A run here. A run there. A quiet Barmy Army growing louder. Cricket Twitter perking up having plunged into gallows humour. Eventually, flicking between two channels wasn’t enough. Out came Sky Go on the phone.

It’s hard to explain the last few overs of England’s innings. They were, quite simply, gobsmacking. I thought the drama had peaked when Trent Boult carried the ball over the boundary for a Stokes six. When people talk about fine margins in sport THIS is what they mean. As it turned out, that was merely an amuse-bouche.

For context, because I’m pretty sure there are a few of you reading this who’ve never watched cricket, Stokes, England’s hero of the hour, was born in Christchurch, New Zealand. His dad, a former Kiwi Rugby League international, was supporting the Black Caps. In 2016, Stokes was smashed to smithereens in the final over of England’s World T20 final defeat. Oh, and just 11 months ago he was cleared of affray. We’re talking about a #narrative here people.

15 runs needed from six balls. Five balls. Four balls. Stokes clears the boundary for six. Nine runs needed, three balls left. Stokes hits Boult’s full toss to the leg-side and races back and forth with Adil Rashid for two. Desperate to beat the ball, which is flying towards the stumps, he dives at the crease. Holy shit. Holy fucking shit. What is happening?!!! It’s only gone and hit his bat and deflected for four. England score six runs instead of two and the man responsible is apologising to everyone for fear of his good fortune being seen as poor sportsmanship. In the stands, it’s pandemonium. If you watch sports, you do so for moments like this. Wow!

And still, it wasn’t over. Rashid and Wood were both run out in the final two balls and somehow, England still drew level with the Kiwis’ 241 run total. I’m not even going to try and explain in detail what a Super Over is. I’d never heard of it before yesterday, but to decide the match, there was one. Think of it as a penalty shootout. Which England won. On goal difference. Sort of. Go find a proper cricket writer to explain, they’ll do a much better job than me. And they’ll also teach you about Sir Jofra Archer. I just know that it was brilliant to watch.

At the end of it all, and to my great surprise, cricket made me do a guttural celebratory scream, the likes of which I usually reserve for Arsenal FA Cup winning goals. And, for a brief moment, like a drug-user experiencing a new kind of high, I pondered whether I might be able to exist without my usual football hit. That I ended the evening watching a Riyad Mahrez injury-time free-kick kill Nigeria’s AFCON dream tells you everything you need to know.

Right, I’ll be back tomorrow when I’ll talk about Arsenal stuff. Promise.