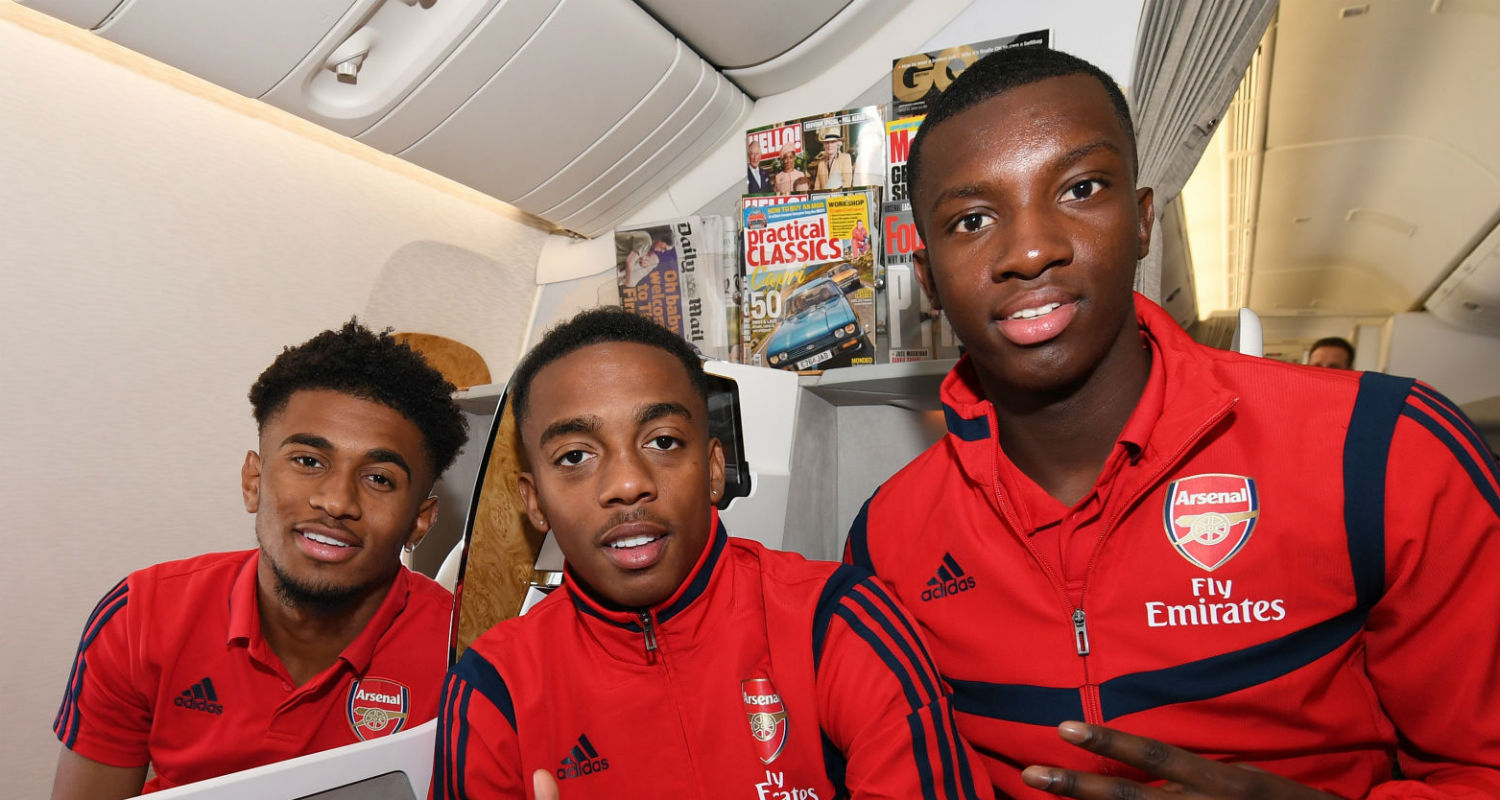 After a couple of weeks in the US, Arsenal’s touring party returned to London yesterday afternoon. By and large, it looks as though the tour was a success.

On the pitch, we won three of our four matches, our large Academy contingent impressed, the senior players got minutes to build their fitness and we worked hard to improve the implementation of a four-man backline.

Eddie Nketiah can take great heart from his contribution. He looked a little nervy when we called upon him last season (I’m thinking specifically about that Blackpool FA Cup game) but his goals against Bayern Munich and Fiorentina, and his movement in a 10-minute cameo versus Madrid, suggest he’s got what he takes. I know he’s still hinting at going on loan, but I really hope we keep him and that he gets a chance in the Premier League.

Joe Willock should have an extra spring in his step this morning after Zinedine Zidane labelled him ‘impressive’ and a ‘top talent’. Given Matteo Guendouzi, Lucas Torreira, Alex Iwobi and Mohamed Elneny are behind him in their pre-season preparations, he has a real chance of starting alongside Granit Xhaka when we head to Newcastle for our opener.

I also thought it was interesting that Emery played Emi Martinez for the full 90 minutes against Real Madrid. Aside from spilling the ball in the build-up to Bale’s goal (It wasn’t even totally his fault) he had a really solid game. There were a few eye-catching saves but it was his willingness and ability to play out from the back that struck a chord. It could be an interesting year for him.

Off the pitch, it looks as though our Stateside supporters appreciated the opportunity to watch us play and train in the flesh. We were certainly the main attraction in the first three games and looked to have a healthy contingent amongst the 53,000 at FedExField on Tuesday. Just by following Blogs’ diary on Patreon, I know there were fan parties, sponsor events, tailgating and Arsenal shirts galore wherever he went. It’s a far cry from our Alpine training camps of the early noughties when the only spectators were clover-grazing cattle and the players’ only entertainment was chess with Vic Akers.

The time away will also have been very useful to the management and coaching teams. Edu spoke about using his first few days to hold meetings with the players and to explain what he plans to bring to the Technical Director role. He knows the importance of camaraderie in the dressing room and spoke in a recent interview about being as transparent as possible.

It’s not clear how much time Edu, Raul Sanllehi and Vinai Venkatesham got with Josh and Stan Kroenke, but I like to think that being able to communicate face-to-face with the people who own the club was a positive for them. Whatsapp and Skype chats are all well and good, but being able to look into the cold, dead eyes of a billionaire who can’t remember your name is how you get stuff done. Surely? Perhaps not. But they did crowdsource some nice buzzwords for their open letter to us frustrated supporters.

On Monday, I outlined a six-point plan for the rest of our pre-season. We’ve not made much progress on any of the stuff I highlighted (it’s almost as if nobody was reading) but now that we’re back on home soil, I expect movement.

After a brief panic yesterday when Emery cast doubt on the Dani Ceballos deal because of the ACL injury picked up by Marco Asensio in the Washington friendly, it looks as though his loan will be confirmed today. The midfielder had his medical at London Colney yesterday. Will we also announce the deal for William Saliba today? My gut says the editorial team might hold that juicy #content for tomorrow.

Our interest in Wilfried Zaha and Kieran Tierney continues to wax and wane. I fully expect these deals to be definitively off and on several more times before the transfer window shuts on 8th August. I don’t suppose either Crystal Palace or Celtic want a moody 33-year-old centre-back?

We can also expect a few more youngsters to go out on loan, including a few of those who were in the US and a couple who beat Barnet 3-2 last night. Yesterday, the Independent claimed that Emile Smith Rowe could return to the Bundesliga. He’s still recovering from injury, so there’s no rush on that front. I think it’s interesting that we’re now willing to countenance his departure having rejected Leipzig’s offer to extend last season’s arrangement. We also have a decision to make about Krystian Bielik.

I’m guessing the players will be at the training ground this morning for a de-brief, a massage and to make sure Ceballos doesn’t steal their locker. Then they’ll have a full session tomorrow before we take on Lyon on Sunday. No rest for the wicked.

Before I go, I’d like to point you in the direction of Tim Stillman’s timely profile of the Arsenal Women squad; perfect if you’re looking to brush up on your knowledge ahead of Sunday’s Emirates Cup game with Bayern Munich. The piece is so good that it led to some extraordinary fanboy behaviour from none other than Ian ‘brush your teeth’ Wright. Excellent stuff.

Right, that’s your lot for today…keep your eyes peeled on Arseblog News.

I’m about to find out if swimming shorts are acceptable office attire. It’s going to be 39 degrees in London today!