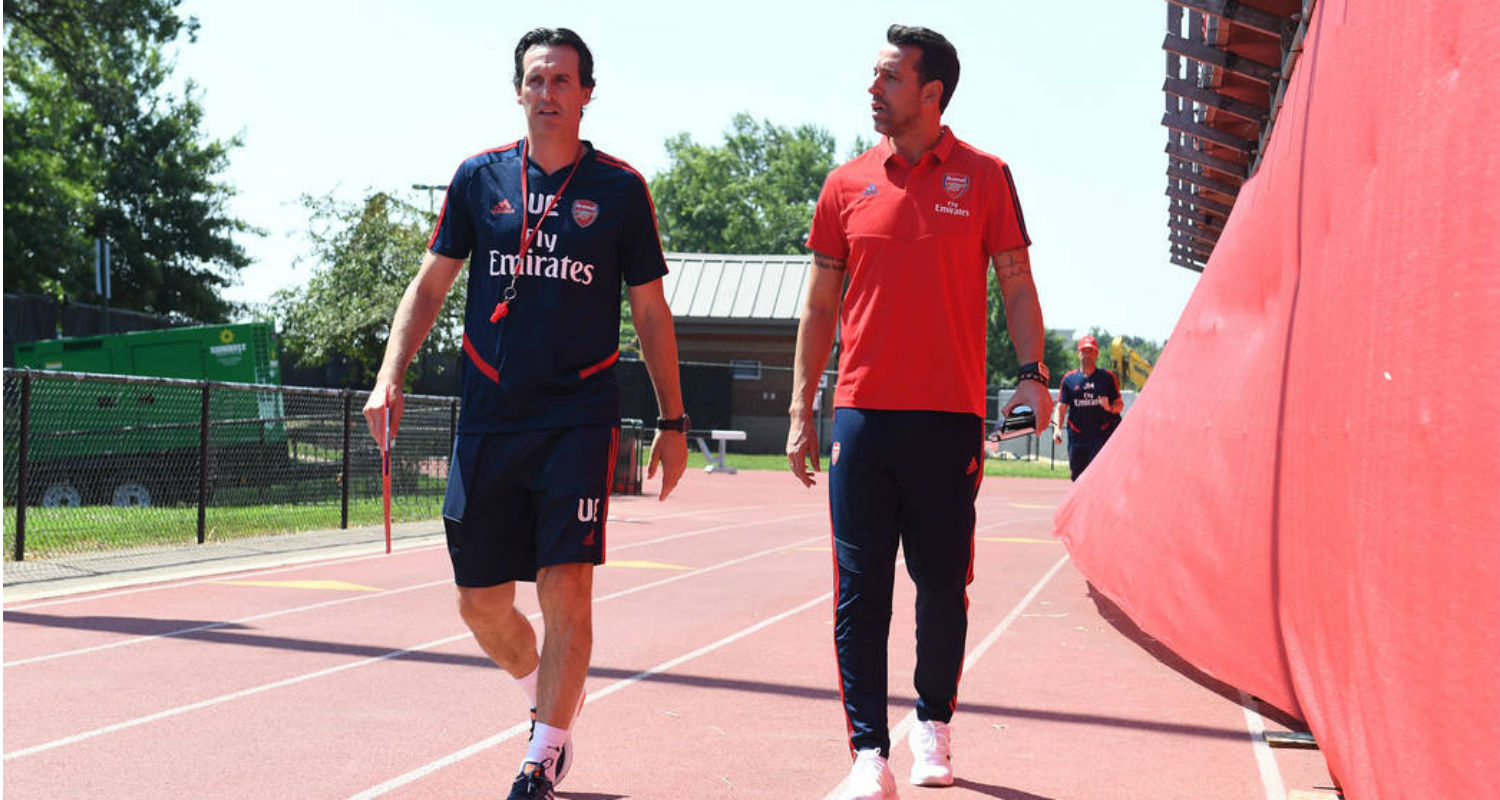 At 5pm on 8th August, the transfer window shuts for Premier League buyers. Three days later Arsenal will take on Newcastle United in the opening game of the 2019/20 season. The summer, as far as football is concerned, is nearly over.

Over the weekend I started thinking about the club’s priorities for the next three weeks and I began making a list.

Lists are great, they focus the mind and give you a clear sense of what needs to be done and once you’ve got all the details down on paper…holy shit, time is up and there’s no time to fix anything!

I’m not saying Arsenal’s to-do list is longer than it was when we jumped on the plane to Baku – we’ve finally got a technical director, after all – but thanks to Laurent Koscielny, it’s probably a fair bit more complicated.

Because I like to be helpful, here’s my very simplistic six-point plan. Raul, you’re welcome. I’m happy to take payment in new adidas shirts, get in touch.

Get rid of Koscielny ASAP

I’m sure most Arsenal fans would have supported extending Koscielny’s contract at the start of the summer so it’s especially sad that such a popular player is going to slink out the back door rather than receive a congratulatory farewell.

I’m sure there’s more to this story than meets the eye –  a communication breakdown during the regime change of the last 18 months wouldn’t be surprising – but at this point, it doesn’t really matter. Put simply, when your captain refuses to play for the club, it’s game over.

Unai Emery doesn’t need this situation hanging over him when the first team squad returns to London Colney on Wednesday so if the Frenchman has sorted personal terms elsewhere, and it sounds like he has with Rennes, let’s get what we can from the situation moneywise and move on.

So far we’ve made about £3 million from the departures of Cech, Ospina, Ramsey, Welbeck and Lichtsteiner and it doesn’t sound like we’re going to get a huge amount for Koscielny. I know the window for selling players lasts longer than the one we’ve got for buying them, but either way, if we’re to swell the coffers it’s time to start selling the deadwood.

It’s nothing personal, but let’s start with Mohamed Elneny. He’s a perfectly decent footballer but he’s not quite good enough for Arsenal. Unlike Mkhitaryan and Ozil, his wages shouldn’t be prohibitive for a second-tier European club and at 27-years-old he’s at the peak of his career. Other clubs would be looking to make a profit on the €12.5 million we paid for him, but I’d be happy breaking even.

Takuma Asano is somehow still on our books, Kelechi Nwakali likewise. Both were signed by Wenger and haven’t had a sniff under Emery. Goodbye. As much as I love the Corporal, if we can raise a few million by selling Carl Jenkinson, we should do it.

I’m pretty sure Emery would get rid of Mkhitaryan, Ozil and Mustafi in a heartbeat but unless there’s a miracle, I can’t see any of them, even the latter, leaving. I refuse to countenance the sales of Lacazette and Aubameyang, so that leaves Calum Chambers and Krystian Bielik as the two players who make my eyes light up with £ signs.

What are we doing with them? I’ll get to this…

Even if Edu gift wraps Kieran Tierney (in cotton wool given his injury) in the next three weeks, our backline still needs strengthening. A defence that has shipped 102 goals in the past two Premier League seasons will likely start the new campaign with Sokratis and Mustafi at its heart. That’s pretty remarkable given we’ve tried to sell the German in every transfer window since signing him three years ago.

In years to come, the deal for William Saliba may look like canny business, but he’s not going to help us for at least 12 months. It leaves us desperately hoping that Rob Holding picks up where he left off before his ACL injury.

A spell at Fulham did Calum Chambers a world of good – he even won their player of the season award – but the fact we let him go last summer makes me think Emery isn’t convinced. There’s no doubt in my mind we should be commanding a fee in excess of £20 million for the 24-year-old but the Koscielny situation has complicated matters.

I reckon we’d earmarked the sale of Chambers to help fund new players further up the pitch but if he leaves now we’d have to buy an experienced direct defensive replacement. The temptation must be to keep him for another season to mitigate the loss of our captain and then to sell him next year when Saliba arrives.

We could take a chance on Bielik, who impressed for Charlton in League One and then for Poland at this summer’s Under-21 European Championships, but his pedigree at the top-level is unknown and his stock, currently, is high. We should cash in on him now and push for a decent sell-on clause. Despite being a decent player, the timing has never been quite right for him at the Emirates and it sounds like he wants out.

What about Mavropanos? He’s perpetually injured, inexperienced and he played like Bambi on ice when called upon in May. I think we should be sending him out on loan.

Elsewhere, our back-up right-back (Jenkinson) sits behind a midfielder (Maitland-Niles) in the pecking order to cover Hector, who will miss the start of the season. Left-back isn’t a huge problem if Tierney joins (let’s hurry up and get that done), but until then we’re trying to teach Kolasinac how to defend so that we don’t have to rely on the ageing Monreal every time we want to play a four-man backline. I’d suggest selling Kola if Tierney joins but his wages are massive.

“We have a very good plan,” said Raul Sanllehi in May when he spoke about strengthening the squad. Right now, our defence, for so long our Achilles heel, is arguably weaker than it was a year ago.

We used to have loads of ball-carrying wide-players at Arsenal. From Alex Oxlade-Chamberlain to Theo Walcott, Santi Cazorla to Alexis Sanchez, Joel Campbell to Lucas Perez…they came in all shapes and sizes. When last season started, we were relying on Danny Welbeck and Alex Iwobi. Now we’re down to the Nigerian.

Granted, Reiss Nelson has been promoted to the first team, Gabriel Martinelli looks interesting and Aubameyang is capable of playing on the wing, but strengthening here remains a long-standing priority. Links with Perisic, Carrasco, Fraser, Claude-Maurice and Malcom have come and gone and our pursuit of Wilfried Zaha looks destined to fail.

By opting to replace Aaron Ramsey with a loan signing – Dani Ceballos from Real Madrid- we’re doing all we can to preserve funds for this position. Do we have something up our sleeve? I hope so because with games across four competitions we certainly need to give Auba and Laca more support. I have a feeling it’ll go down to the wire.

Unai Emery has confirmed that he wants five captains again which means he has a couple of positions to fill. The smart money is on Granit Xhaka taking over the armband proper – he was selected to lead the players against Bayern Munich – while Nacho Monreal and Mesut Ozil will continue as deputies. Funnily enough, all three have been linked with moves this summer.

“I want one English player in these five captains,” Emery said last week. Given we have very few Anglo-Saxons with regular first team experience, he’s got to be thinking about Rob Holding. Sokratis, Hector Bellerin and Alex Lacazette must be in the running for the other spot.

Victories in all three of our Stateside friendlies seem to have buoyed spirits both in the camp and on the terraces. It would be great to keep the feel-good factor going with more high profile scalps. Inside the next two weeks, we play Real Madrid, Lyon, Angers and Barcelona. Even though these games are mostly about fitness, testing new tactics, giving game time to hot prospects and deciding on our best starting XI, it’s hard to play down the importance of building momentum and collective confidence. Let’s try and avoid a paddlin’ in the Nou Camp on the eve of the new campaign, yeah?

Right, time for me to go to work, if there are any developments on any of the above, we’ll cover it all on Arseblog News. Enjoy your Monday.

Mikel Arteta wants transfers as much as we do