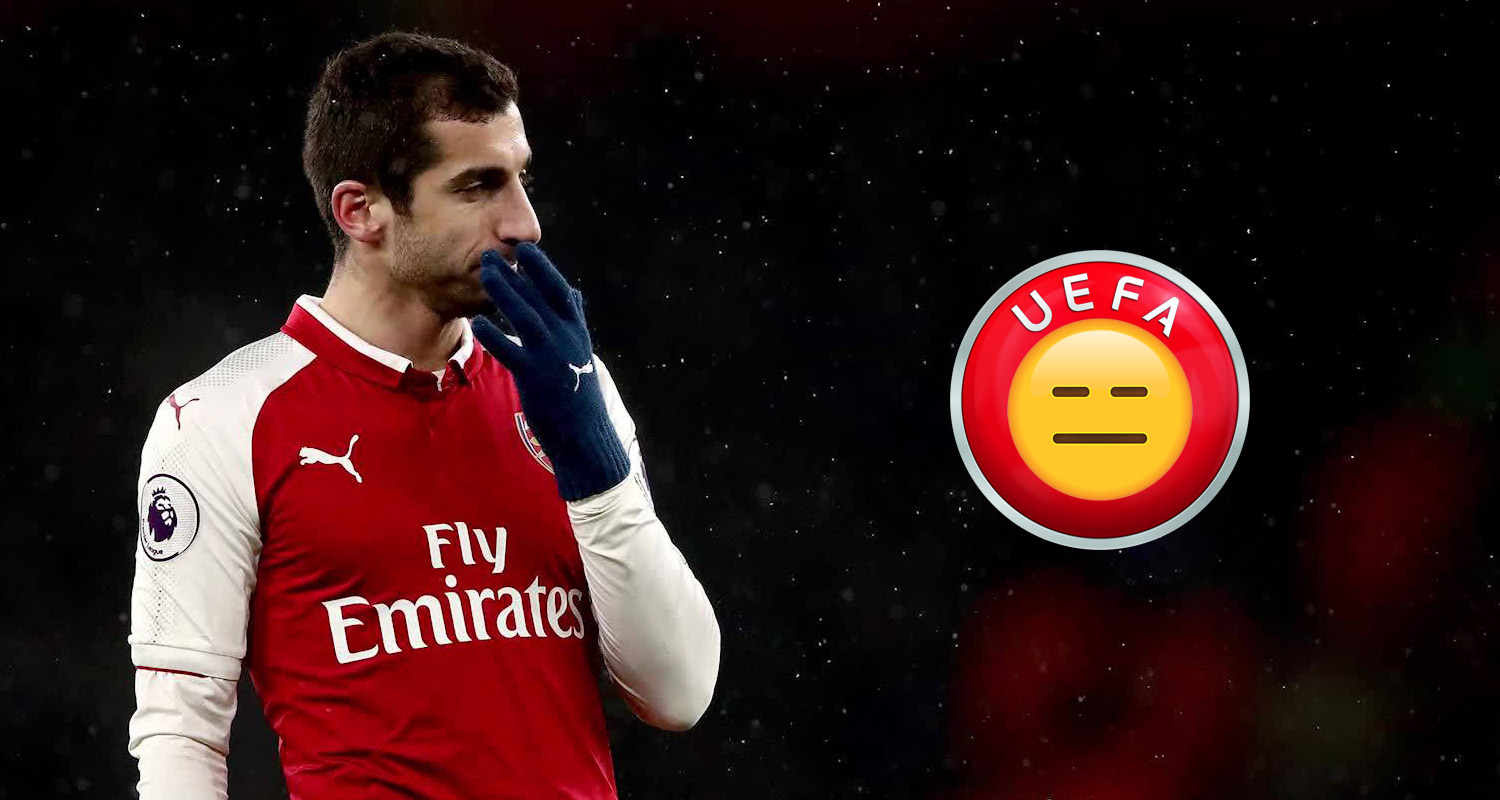 Although the prospect of Henrikh Mkhitaryan missing the Europa League final was something that had been discussed for some time, and not an entirely unexpected outcome, when the club announced his exclusion from the squad that will travel to Baku next week, I still found it a bit of a shock when the decision was finally made.

Ultimately, it came down to the player himself. After discussions with his family he decided against going to Azerbaijan. This is after ‘reassurances’ from their ambassadors, sports ministers and the FA, as well as lengthy consultations with Arsenal and UEFA regarding safety and security. I can’t pretend to know the ins and outs of this political situation, or precisely what Mkhitaryan was afraid of, but it was sufficient for him to decide he couldn’t go and play in one of the biggest games in this club’s recent history, and probably the most important fixture he’s ever likely to be involved with at Arsenal.

You have to ask why any professional footballer would deny himself that. It’s not simply about fears for his own safety and security, but he obviously felt his presence might put teammates, staff, officials and bystanders at risk. And then you have to ask how on earth is it right that any player, regardless of who he plays for, should be put in a position like that. That he’s an Arsenal player brings it into sharp focus for us, but looking at it objectively we have a situation where a player’s nationality has prevented him from playing in a European final.

As I expected, UEFA’s ‘out’ on this is to say that they did everything they could feasibly do to ensure his safety, but that it was a ‘personal decision‘ which they so magnanimously respect. It’s a complete abdication of responsibility, because their decision to stage the game in Baku always threw up the possibility that this might happen. For an organisation that preaches fairness, equality and how football is for everyone, they created a situation where it’s clearly not.

On top of this, we have reports that Arsenal fans are being prevented from travelling to support their team because of their Armenian heritage. Our blog friend @Gingers4Limpar Tweeted this yesterday:

Old friend of mine has been blocked from attending the Europa final by Azerbaijan government, seemingly due to his Armenian descent. Arsenal supporter for 35 years, had a ticket & travel booked. Am told club won’t intervene or criticise the policy. Bravo @UEFA & @Arsenal

So not only are Arsenal without a player because of where the game is being played, certain fans are being prohibited from attending too. Back in 2017 UEFA launched their #equalgame campaign, which says:

The UEFA football and social responsibility programme is aimed at strengthening the health and integrity of both football and society as a whole, and the core pillar of Respect is integral to this.

This umbrella theme underpins all the elements of UEFA’s social responsibility strategy, including the promotion of diversity, peace and reconciliation, football for all, health, respect for the environment and the campaign against discrimination, racism and violence.

#EqualGame is designed to spread the positive spirit of inclusion, amplify a clear and uplifting message about the benefits that football brings to the community; show how the game will be enriched by greater diversity; and explain the European football family’s role to make the sport open and accessible to all.

What is this but discrimination? Where is the integrity in hosting a final in a country in which citizens of another nation don’t feel safe, and even when a player is given reassurances he finds himself on the end of veiled threats? How is it open and accessible to all when certain fans are denied visas to enter that country because of their heritage? It’s a shameful, disgraceful situation, for obvious reasons, and when you step back from it there’d be a very good case to be made for Arsenal to boycott the game.

I actually looked up what the consequences of this might be, and from what I can gather there’d be a hefty fine (it’s €500,000 given that we’re at the finals stage), as well as:

I mean, I want us to go there and win, to lift a European trophy, to stick two fingers up at UEFA afterwards, to be in next season’s Champions League, and there’s the consideration of fans who have spent a fortune in terms of time and money sorting out their trip to Baku, but if we turned around tomorrow and said we weren’t playing because of this I don’t think I’d object too strenuously to that decision. It would be amazing to see the club take a stand against something which is so very wrong on every level.

I don’t think that will happen though. And while I place the blame for this 100% at the feet of UEFA, I have to say I find Arsenal’s response to it a bit meek. In the statement announcing Mkhitaryan’s absence, they say they’re ‘deeply disappointed’, ‘sad’ for the player himself, and have written to UEFA to express their ‘deep concerns’. A strongly worded letter, eh? That’ll show ’em.

I spent a lot of yesterday thinking about what Arsene Wenger would have had to say about this, and how our response might have been with him at the helm. I have no problem with what Unai Emery said, he’s dealing with an incredibly unpleasant and difficult situation in a language which he’s still learning, so this isn’t about him v Wenger or anything like it.

However, I wish we’d been more strident. I wish we’d stood up for what was right and fair, because this is a grossly unfair situation. For Mkhitaryan of course; for Arsenal and Arsenal fans; and on a sporting level we’re being denied the use of a player who is our third highest goalscorer this season, someone who has already scored against Chelsea this year, and who could have played a significant role in this game even if he wasn’t necessarily a nailed on starter. It goes to heart of what sport is supposed to be about, and it has cast a huge stain over what should be a glorious footballing occasion but which is now well and truly tainted whatever happens next Wednesday.

I’d have liked to see the club say that was was more than deeply disappointing. That it was unacceptable that one of our players should be put in this position, and that some of our fans are not allowed into Azerbaijan to support their team. Maybe there’s a further statement to come, perhaps we’ll get something that I would consider properly representative of the values of the club – in as much as we like to think they exist – but what we got yesterday wasn’t that and it makes me sad that we’ve been so tepid, almost fearful in our response. What are we afraid of? Do we not want to upset the UEFA apple-cart, with its potential European Super League, that we’ve failed to take a proper stand on something we really should have?

I don’t want to put this on Arsenal, because it is UEFA’s mess, but I can’t help but feel a bit let down by how we’ve reacted to it from board level – because ultimately that’s where this reply has come from. I can’t help but think that the reaction to it, from inside and outside as well, is dictated to a bit by the fact it’s Mkhitaryan. A good player on his day, but often peripheral, and far from a superstar. How would this have played out if a player of greater profile were excluded in this way?

It shouldn’t matter, but I suspect it would have been different. In the end though, your profile, your stature in the game, your quality as a player, none of that should be a consideration, because no player should be forced to miss a game of this importance because of where he was born. We all understand the complexities of relationships between certain nations, but we also understand that discrimination against people because of their nationality is inherently wrong and something we should all stand against.

Whatever way you to want to look at this, however you try and find a way around it, this is wrong. It’s a shame for Henrikh Mkhitaryan and for Arsenal, but most of all it’s a shame on UEFA for condoning such an egregious violation of the fundamentals of football, society as a whole, and basic fairness.