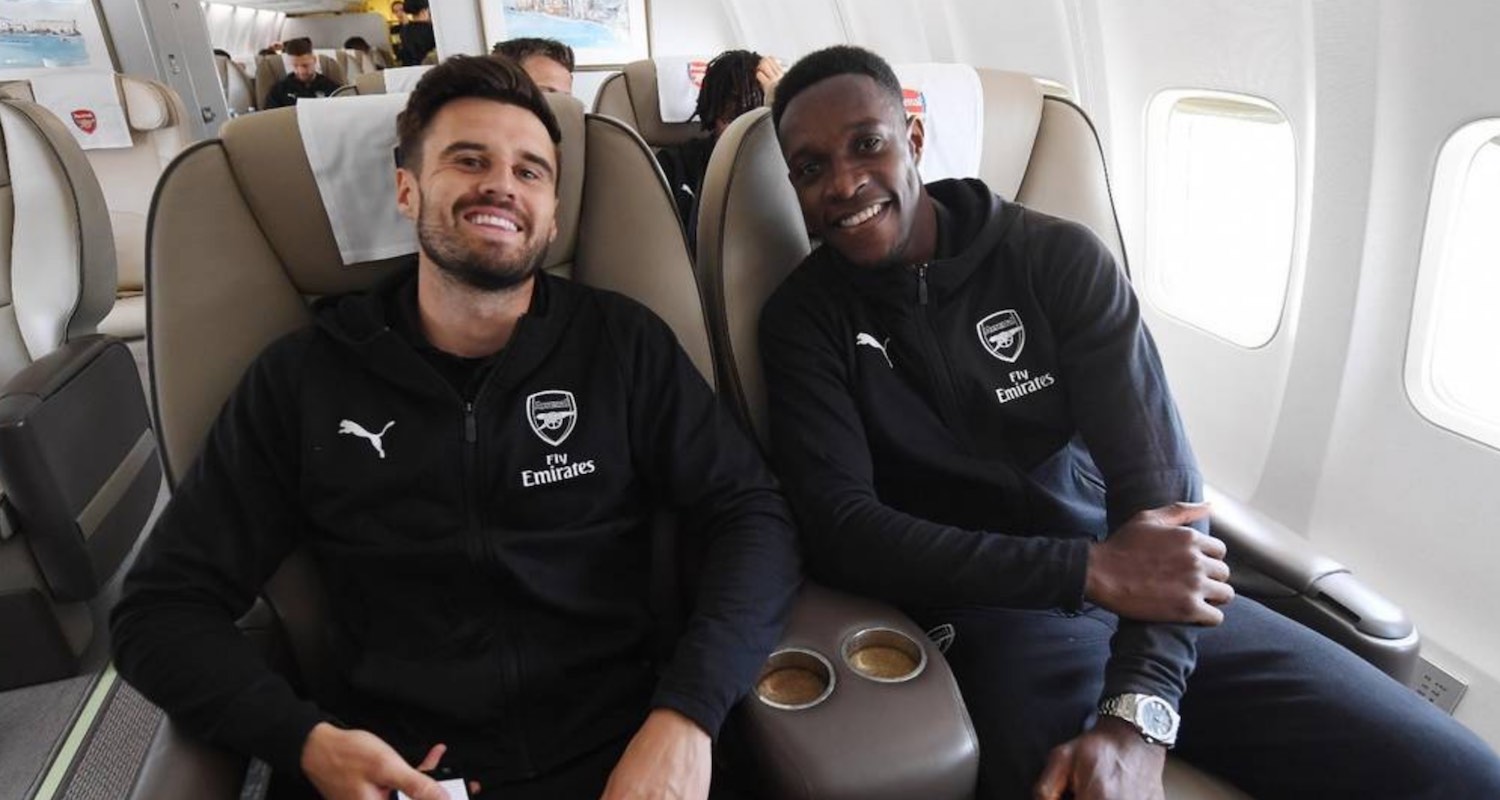 How long do magpies live? I ask because there’s one that starts chattering in a neighbour’s back garden at 5am every morning, and it’s not so much the noise of it – which is pretty irritating, I’ll admit – but the fact it sets off Lana who HATES magpies and wants every single one of them dead. Immediately. Chattering + lunatic German Shepherd pup going mental makes for an abrupt start to the day.

Anyway, onto matters of Arsenal this Sunday, and the team took off for Baku yesterday. I suspect they probably have a direct flight with no stopovers in Tbilisi, Chisinau, Ankara, or Krasnodar – which is quite ironic as Wednesday’s game is to ensure we don’t have fixtures in those cities next season.

The big news, as much as there was any, is that Danny Welbeck is in the squad and thus, you have to assume, available to play some part in the match. It’s impossible to see him start having spent such a long time out, but without Henrikh Mkhitaryan we’re short an experienced attacking option from the bench, and the England international certainly provides that. He’s had some minutes in behind closed doors friendlies, scoring a hat-trick in one game (although we don’t know the opposition), and in what will be his final game for the club there’s a chance he could make a significant impact before he leaves.

That game against Leicester. His first appearance after a lengthy injury layoff. Arsenal in need of a goal. He comes off the bench and heads home a winner. Ok, it didn’t all work out after that, but there is no after that this time, so if he could just please do that again we’d all be very happy ok thanks bye cheers Danny good lad.

The fact that we can name 12 substitutes for the final has seen the inclusion of some young Academy talents like Joe Willock, Xavier Amaechi and Bukayo Saka. Their chances of playing are probably quite slim, but as an experience, to go to a European final is something special. And who knows? Maybe circumstances could see one of them called on, you just never know. Whatever else though, it should give them a taste of what they could achieve in their careers, and hopefully they’ll have more of it with us. The full squad list is here.

Moving on to transfer rumours, because stuff is going and it’s the shield of the Europa League final that is protecting us from the madness, stories from France suggest that we’re after a young, pacy attacking midfielder from Lorient called Alexis Claude Maurice. He scored 14 goals in Ligue 2 last season, and of course that’s the club we brought Matteo Guendouzi from, so maybe we’re making them our Southampton.

He is 20 years old, and you can see video of his goals in the story on Arseblog News. As ever it’s impossible to judge a player just by his finishing in a compilation video. I’m sure there’s a YouTube clip of Julio Baptista scoring overhead kick after overhead kick which makes him look like the new Ronaldo (the great one, not the one with the neck like a reticulated python), so you have to take these things with a pinch of salt.

Nevertheless, in terms of what we’ve heard about this summer’s transfer plans, how we have to ‘outsmart the market‘ and all that, he seems to fit the profile. He’s a young player with some potential who won’t cost a fortune, and from what I understand that’s true of the majority of our targets. If there is real substance to this story, it might also give us a bit of a clue as to what we might look like next season.

It’s widely believed that young Brazilian forward Gabriel Martinelli will be joining us in June, and we also have Reiss Nelson to come back from his Hoffenheim loan to stake a place in the first team. There’s a need for Emery to integrate the likes of Saka and Amaechi if we won’t to hold onto them because their talent demands playing time or they’ll go elsewhere because there are plenty of suitors (for more on that check out the latest Arsecast with Charles Watts). So, from being a team with not enough options when it comes to wide attacking players, we might even have a surplus of them. Anyway, let’s see how it all plays out, but it is an interesting consideration.

More to come on the Europa League final over the next few days, but it would be remiss of me not to mention the fact that today is the 30th anniversary of the greatest ever finale to league season. The idea that Man City’s win right at the death a few years ago comes close is absurd. There’s no comparison between a club funded by billionaire, nation state cash beating a 10 man QPR 10 side which had barely escaped relegation and Arsenal going away from home to the most dominant side of the era needing to win by two clear goals to win their first title in 18 years. I’m sorry, but anyone who tries to tell you City’s was the best win deserves a sound thrashing and a couple of years of hard labour.

Nothing comes close to what happened at Anfield that night. Thanks to @Carla5262 who reminded me of this doodle I drew some years back which I think really captures the essence of it all:

In seriousness though, it was an incredible occasion, perhaps the most iconic Arsenal goal of all-time, and for all fans of the club – especially 165,512 who attended the game in the away end – it was an unforgettable night. I now can’t wait for October, which is when this will be released:

30 years on from the game that blew my mind more than any other I’m delighted to say the book, 89, an oral history telling the story of the moment, is coming soon. https://t.co/S57UgrLAJL pic.twitter.com/8t2aTrJxjo

And to play us out this morning, there’s no other choice than this. Have a great Sunday folks.