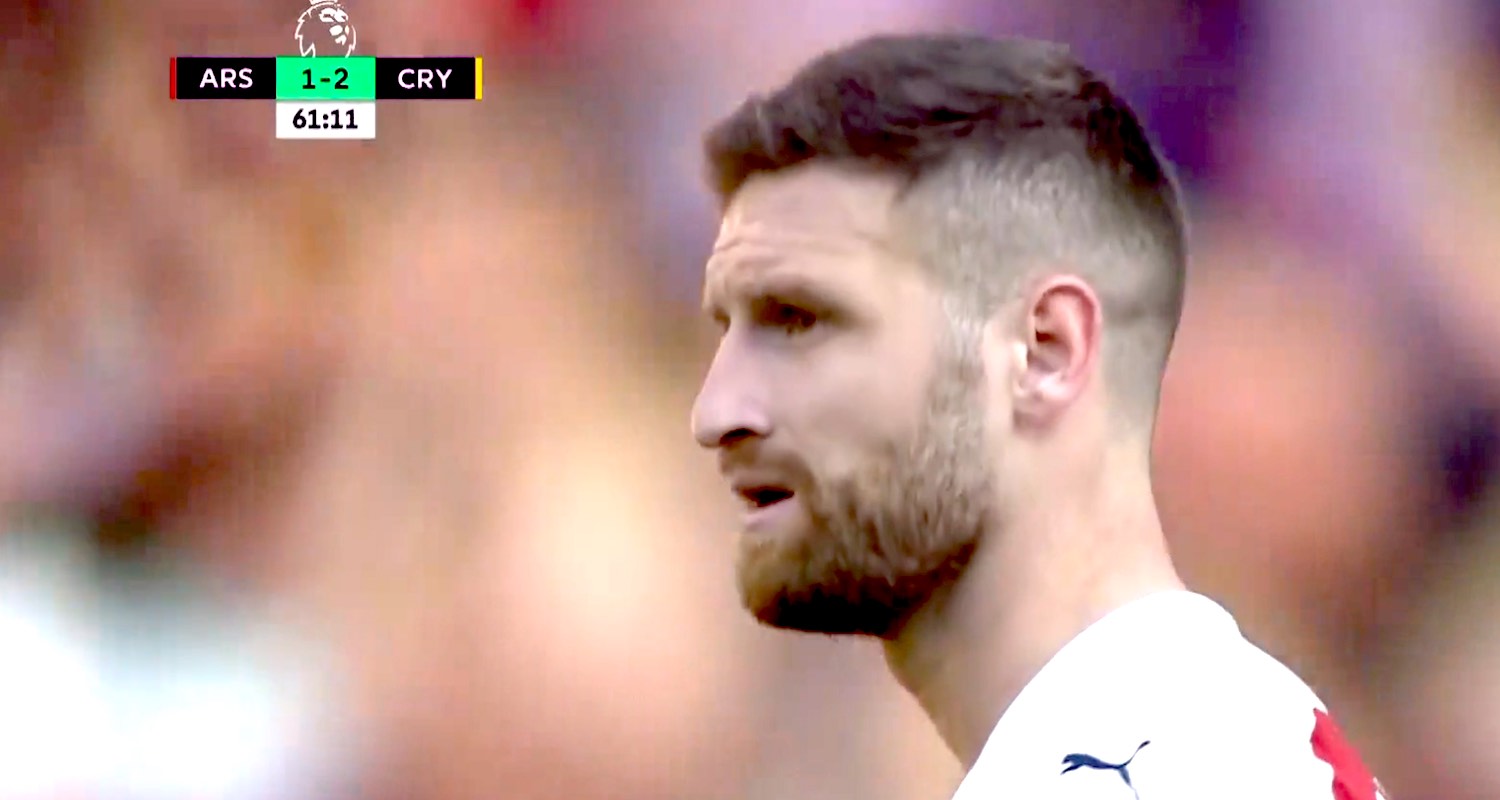 There are times this season when Unai Emery has got things very right. And others when he’s got them very wrong. Yesterday’s first half and team selection was one of the latter, and the manager wasn’t helped by a performance from Shkodran Mustafi that was so calamitous a team full of Messis would have struggled to get the right result.

The Spaniard went with a back three, bringing Dinos Mavropanos in, and handing a start to Carl Jenkinson. A central duo of Mohamed Elneny and Matteo Guendouzi was again borne out of necessity – Torreira was unable to do 90 minutes apparently, while injury cost us Granit Xhaka and Aaron Ramsey – but it’s a toothpaste + orange juice midfield combination, and even with our two strikers and Mesut Ozil in behind them it had a detrimental effect on how we played.

They are like two hairy north ends of a magnet being forced together. They get under each other’s feet, they run around a lot, make safe passes but do nothing of any great value. Late in the first half there was the sight of Mustafi (more on him anon) with the ball at his feet frantically gesturing to a massive area on the pitch where our midfield should have been, but wasn’t. So for Emery, if you don’t have any other choice than to pick them both, you can’t do it without offsetting their averageness with another player. It means using a back four, and then someone like Alex Iwobi or Henrikh Mkhitaryan.

In fairness to Emery, he did that at half-time but it feels like he should have known how the first half would have played out because we’ve seen them be this ineffective before. Was he banking on our excellent home form to see us through what was basically the wrong selection and formation? A touch of hubris, perhaps? Not clever against a team with an away record as good as Palace this season. Whatever the reason for it, and he cited a need to protect players physically, it was as bad a half of football as we’ve played all season and we deservedly went in behind – thankfully just by one goal.

Mavropanos conceded a free kick for which he was booked. The kind of free kick a young centre-half will give away, but we just had to defend it. The ball came in, Jenkinson played Palace onside, but Benteke – a man whose last goal came when dinosaurs roamed the earth – had run off Mustafi to head home. It wasn’t the German’s biggest blunder of the day, but it was another example of how poor he is defensively. Sadly we’d get more evidence of that as game went on.

The half-time changes, Maitland-Niles and Iwobi on for Jenkinson and Mavropanos saw us revert to the back four we should have started with, and the Nigerian’s presence higher up the pitch made an immediate impact. We scored a fantastic goal, Ozil’s chopped finish came from a beautiful Lacazette pass after he’d combined with Iwobi, and you couldn’t ask for a better way to start the second half. It wasn’t all one-way traffic but it was much better and at home you hoped we’d go on and take control of the game.

Enter Mustafi once more. That second Palace goal ought to be the final nail in his Arsenal coffin. With the ball at his feet and his back to Zaha, he stopped as if he thought Leno was going to come for the ball. I have no idea why he thought that, but it was a stupid thought. Zaha couldn’t believe his luck, nipped in and clipped the ball beyond the keeper to make it 2-1. Mustafi, incredibly, jumped up and down and threw his arms in the air like it was somebody else’s fault. Kolasinac turned away in disgust, and genuinely the moment broke our live blog as 1000s of people immediately logged on to see what was being said about what had just happened. The traffic spike banjaxed the server for about 15 minutes.

I like to think I have a decent amount of patience for players, and I always do my best to try and find some positives but with this guy it’s so very difficult. I did laugh when Emery suggested afterwards Mustafi had been ‘consistent this season‘, because while he’s rightly defending one of his players in public, it’s a moment of genuine accidental comedy. He has been consistently error prone, and it’s now not even something we can or should argue about. It’s who he and it’s what he does, so expecting anything different is a fool’s concern.

We’ve probably had worse defenders in our history – I know we have – but it’s impossible not to view Mustafi through the prism of his price-tag. Spending £35m on him is like spending a billion pounds on a shoe which repeatedly kicks you in the balls. If you keep wearing the shoe, whose fault is it when you have massive, swollen goolies? And the disastrous nature of that second goal, which still looks unbelievable and somewhat surreal this morning, overshadowed his role in the Palace third. Quite what he’s doing in the box when the corner he himself conceded came in is beyond me. He runs away from the man he’s supposed to be marking, so of course than man heads home to put the game out of reach.

We got one back via Aubameyang, but there’s no question that the turning point in the game was Palace’s second, and I think the nature of it had a profound effect on the team. It was almost as if they couldn’t believe what had happened, and as they struggled to come to terms with the ridiculous stupidity of it, Palace took advantage and scored again.

The reality of our squad and our schedule means that we’ll probably need Mustafi between now and the end of the season, even if I’d be quite happy to never see him in an Arsenal shirt again, but if moving him on this summer isn’t right at the very top of our to-do list then the people running the club aren’t doing their jobs properly. It’s like employing a taxi driver who crashes his car every other fare. I don’t even mean to be harsh, but that’s enough now.

The defeat was obviously a major blow to our Champions League hopes, and we missed the chance to go into third place. It remains in our own hands, but I worry that a team capable of messing up a home game as badly as we did yesterday will find ways to do something similar on the road where our record is still nowhere near good enough for me to confident about our ability to to finish in the top four.

There’s a strange thing with Unai Emery – for me at least. I find myself positive about what’s happening, and then there’s a setback. We respond, and something else happens which sows doubts in my mind. The whole season has been a bit like that for me, and after the excellent performances against Napoli and an away win at Watford – however much we struggled on the night – I felt good about what we were doing and where we were. Then yesterday happens, causing that uncertainty to manifest itself again and raise questions about how the manager operates. For example, do we view his willingness to make half-time changes as a good thing, or is it evidence he gets things wrong too often from the start?

The positive side of me now looks for a response, and Emery has generally been good at reacting when things haven’t gone well. There is no more margin for error though. We have to go away to a very good Wolves side on Wednesday evening, and confidence will have taken a hit after what happened yesterday. We’re pretty fragile away from the Emirates as it is, so this is not a game which will allow the manager to get it wrong again – he needs to come up with the right plan for 90 minutes, not 45.

The players too have to take some responsibility. There are experienced, quality campaigners in this squad who now have to step and deliver. That’s the reality of our situation. Any hint of feeling sorry for ourselves will be exposed in this league, so that can’t be allowed to happen. Emery can help by picking teams with the right balance and personnel, in as much as he can with what’s available to him, but we need these guys to show some leadership too. Anything remotely like yesterday at Wolves or Leicester will probably render our final two Premier League games of the season meaningless.

We’ve taken a real hit, a self-inflicted sucker punch, but the players and the manager have it in their own hands to do something about it.

Let’s see if they can.

That’ll be available before lunchtime. Until then.