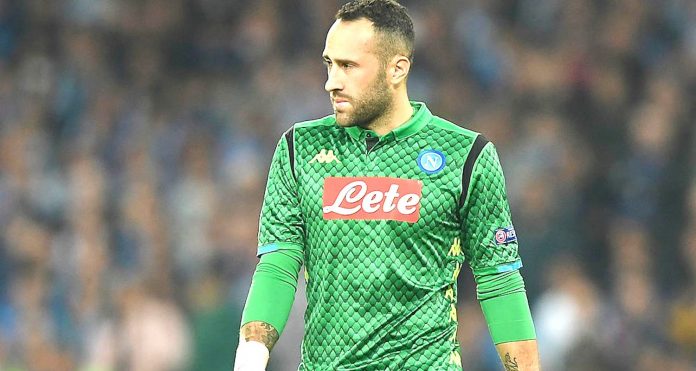 Morning all, welcome to a brand new week and after an Ozil-heavy weekend, what about trying to find something else to talk about this morning (especially as that whole thing is bound to be a topic of conversation on the Arsecast Extra later on)?

Therefore, I’m going to start with David Ospina. Had you forgotten about him? Well, he’s an Arsenal player on loan at Napoli, and he has a contract with us until 2020. We signed him in 2014 during the Brazil World Cup, and we either gave him a sneaky extension which I can’t remember, or a hell of a deal back then.

At Napoli he’s played 18 games for them across Serie A, the Champions League and Coppa Italia. Now though, he’s being left out of the team, and the Colombian explains:

“My current situation is that I am on loan for this season and there is a clause based on a certain number of games, where if I play, the transfer will become an automatic purchase.”

I have no idea how many games that is. Given the way we negotiate outgoing deals it’s probably 50,000 games in a season, but if it is a hindrance now to first team football his situation is one we have to think about this summer. Even if Carlo Ancelotti says:

“Ospina will remain at Napoli next season, regardless of how many games he plays.”

But does that mean another season on loan or are Napoli prepared to pay to take the player on a permanent basis? I know this might not feel like the biggest issue we have to deal with this summer, but it is still quite important. As we all know and understand and have had rammed home to us by the January transfer window, Arsenal will only be able to spend what is generated by the club itself. There will be no infusion of liquidity from KSE to help make the team more competitive, so what we can do this summer is restricted by how much we have in the bank.

Ospina is a 30 year old goalkeeper with nearly 100 international caps, and while he’s not necessarily to my taste, he’s the kind of player who should be in reasonable demand during the summer. The fact he’s got just a year left on his contract means he’ll be available for a fee that’s not going to break anybody’s bank, so whatever we bring in for him can be added to the pile to help us do what’s required – and I suspect there’s going to be plenty of squad building/rebuilding to get through.

Of course this isn’t really about David Ospina per se, but about Arsenal selling better because players are assets, assets are valuable (to varying degrees), and generating revenue through them is an important part of this self-sustainable model we’re operating under. I think we saw some improvements in how we buy players last summer, with all five incoming deals completed before mid-July – thus the players were with the squad for pre-season and that’s always beneficial. Being parachuted in at the last minute near the deadline is not ideal, and we did better last summer.

Of course you can ask how that’s going to go this time around because the Head of Recruitment who did the nuts and bolts of all those deals is gone, and as yet we haven’t replaced him. That’s a bit of a worry, because transfers take time, and we should really be in the early stages of our summer preparations now. The sooner we appoint that Technical Director the better, but various stories say this could easily be a summer appointment. Again, that’s somewhat concerning, but not what this post is about.

David Opsina is not that valuable, but he’s somewhat valuable in the market and as a club we should get as much as we can for him. Remember, Danny Welbeck is leaving for nothing. Aaron Ramsey is leaving for nothing. Petr Cech is retiring. The Mesut Ozil situation may see us take a big hit if he is to leave this summer, but obviously that’s still up in the air. If he does go though, his wages will more than likely mean Arsenal will have to take a hit on what his nominal transfer value would be because few clubs can afford to pay someone that much.

You look at some of the deals we’ve done in recent times and they’re bad. Wojciech Szczesny who kept £60m Alisson out of the Roma side for two years was sold to Juventus to replace Gigi Buffon for just £10m. Whoever did that deal needs to be tied down and battered around the face with a wet catfish. Lucas Perez, on whom we spent £18m + wages, went to West Ham for just £3.5m. Jack Wilshere left for free. Our mismanagement of the Serge Gnabry situation saw a now Bayern Munich player depart for less than £5m.

To be fair, the deals for Walcott, Oxlade-Chamberlain and Giroud – which generated over £70m – were pretty decent. We got what we paid for Gabriel and Coquelin brought in around £12m, but we need more like them, and generally speaking this is an area in which we can definitely improve. When you see some of the prices paid in the Premier League for middling players then we can certainly do better with some of ours.

The question is who is on the list this summer? How much can you reasonably expect someone like Mohamed Elneny to generate? How much of the £35m we spent on Shkodran Mustafi can we recoup? Who else can we shift without creating too much work for ourselves this summer? We’re already losing four first team players (Ramsey, Welbeck, Cech, Lichtsteiner), who all have to be replaced. There must be a limit of how much change you can implement in one window but there’s also a real need to improve the quality of the squad.

We don’t know exactly how much we’ll have to spend this summer, the optimistic outlook with Champions League qualification is up to £100m, but that would also be boosted by player sales as and when we make them. I do wonder if there might be some pressure/temptation to cash in on someone genuinely valuable in the transfer market to help boost the coffers, but this summer more than ever before it’s crucial we wring every last penny out of the players we’re looking to move on. Loan deals aren’t much use to us, we need to sell and sell better. Is that a strength of Raul Sanllehi, I guess time will tell.

Right, James and I will have the podcast for you later today. If you have questions, please send to @gunnerblog and @arseblog on Twitter with the hashtag #arsecastextra.