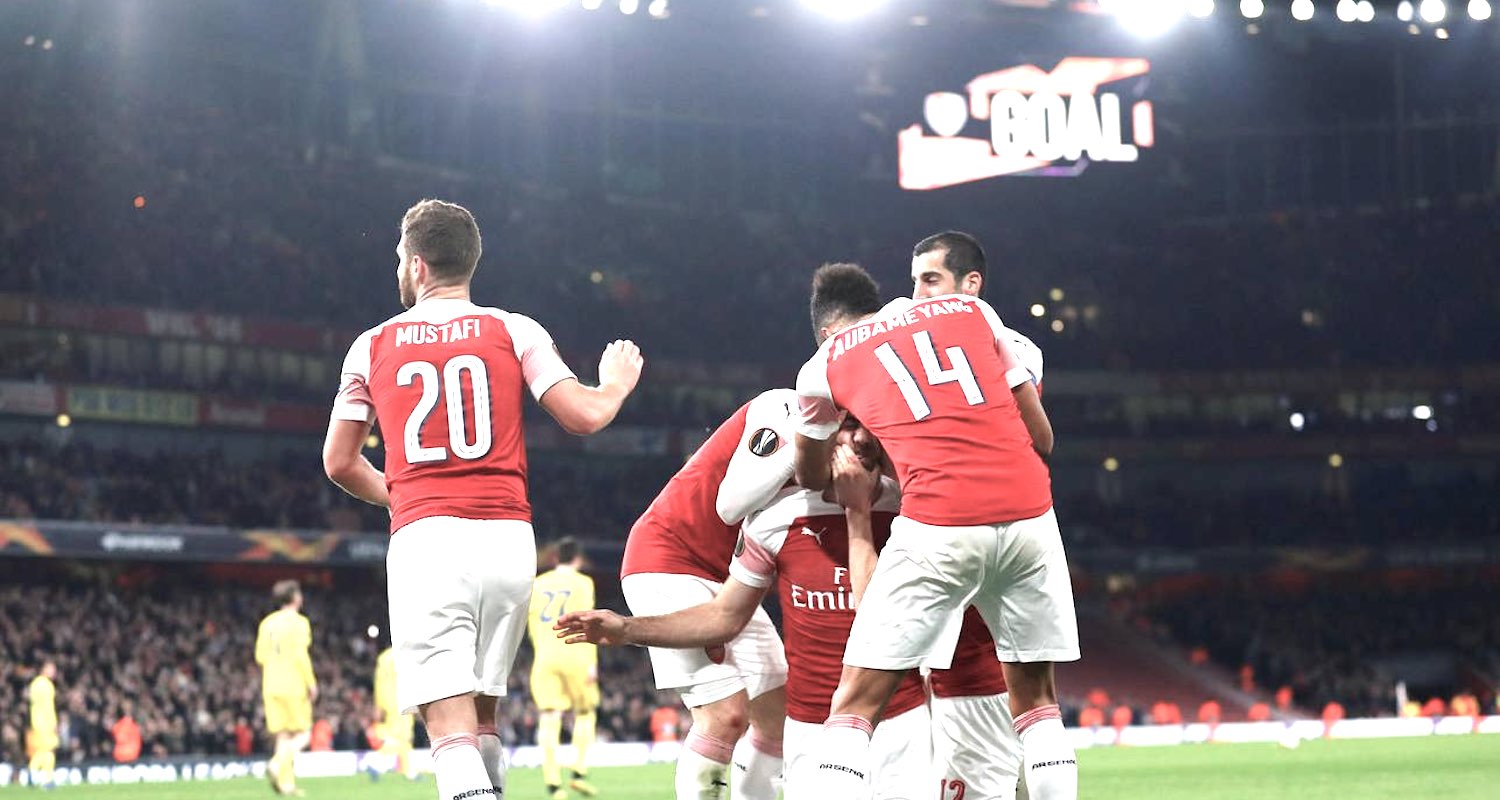 Arsenal made it through to the Europa League Round of 16 with a comfortable and fairly routine victory over BATE Borisov last night. As I sit here this morning and ponder the game, I think the Alan Patridge shrug kinda sums things up quite well:

They are a poor team who we should beat 99 times out of 100 but the 1 left over just happened to be last week and thus we had to do the business last night. Unai Emery reverted to a back four, brought in Mesut Ozil from the cold to help link the midfield and attack, and it made us look a more cohesive side.

Now, in all this we have to take into account the quality of the opposition we were facing, so anything other than a performance in which we had more or less complete control of the game would have been a surprise. However, I don’t think it’s any coincidence that both Alex Iwobi and Henrikh Mkhitaryan looked better when they had someone to combine with, and Matteo Guendouzi using the German as a way of playing passes between the lines had a positive impact too.

We ‘scored’ early, Aubameyang driving down the right and his low cross was turned into his own net by some bloke who drives a bus for a living. In typical Arsenal style a bright start in which we’d created a number of chances then almost saw the tables turned. They fired a shot into the side-netting when they really should have gone across the keeper, and but for Stephan Lichtsteiner clearing off the line they’d have been level almost straight away. Quite how we manage to concede chances to every single team we play is a massive worry, but at this point it’s almost impressive – like a piece of performance art. I wouldn’t be surprised if there was a Netflix documentary being made about it because it’s just as good an explanation for why it keeps happening as anything else.

We had some sort-of chances because we had so much of the ball but nothing you’d call absolutely clear cut, and then after some short-corners which came to nothing, Xhaka decided to ignore the instruction to implement Routine 176a, variation 7b and just delivered a good ball into the box. Shkodran Mustafi attacked it very well and planted a header home to make it 2-0.

They had another decent chance early in the second half but because the bloke spends most of his week tending his flock of wild chickens and being his town’s postman and orthopedic surgeon, he couldn’t really trouble Cech. We lost Koscielny to injury and brought on Sokratis and once more Xhaka delivered from a corner – the Greek international headed home the game’s third goal which pretty much killed it as any kind of contest. Which it wasn’t anyway, but you know what I mean.

Alex Hleb came on to my complete and utter indifference, Torriera replaced Guendouzi and everyone knew it was all but over. BATE seemed happy enough with 3-0, Arsenal didn’t particularly want to expend too much energy with a much more difficult game against actual footballers coming up on Sunday, and Denis Suarez came on to make a home debut that he’ll remember because it was his home debut and not because he did anything particularly interesting.

Thankfully, there were just two minutes of added time, and the referee blew his whistle. Unai Emery was the most excited, energised man in the stadium, and that’s fair enough. He can surely see as well as us that this is a team not in particularly good form, so anything he can do to encourage them is reasonable if you ask me. If his histrionics on the sideline make this bunch feel even slightly better about themselves considering the more difficult fixtures we have coming up then go for it.

I know we’ve talked a lot about the top four chase, or winning the Europa League as this season’s goals. The latter is almost like two trophies. 1 – the actual trophy and 2 – entry into next season’s Champions League. I’d go so far as to say it’s three trophies where the third one is not having to play in the Europa League again because it’s so awful. It is flat coca-cola. It’s a fried breakfast from a service station. It’s Starbucks coffee. It’s bacon with that rainbow sheen on it. It’s the 57 minute wait for tech support and then as soon as you get through they cut you off. It’s the lettuce leaves from an all you can eat salad bar that have been sitting there all day. It is the solo album from some bloke who left a boyband because he wanted to express himself artistically before it bombs and he ends up flashing his goolies or eating worms on some celebrity reality show.

I cannot wait until we don’t have to play in it anymore because even if we’re not going to win the Champions League I’d rather be in that than this. Of course if we go on to win it this season I’ll be delighted and chuffed and I will celebrate a European trophy but a large part of me will be celebrating the end of poxy Thursday night football against poxy teams who make me feel like you do when someone coughs straight into your face.

Now though, we await the draw which takes place today, and to be fair there are some good teams left in it so we might well get a tie which is relatively exciting. We’ll have that news for you over on Arseblog News later on. For now, I’ll leave you with a new Arsecast Extra recorded last night, chatting about the game, Mesut Ozil’s return, the Southampton game and lots more. Subscribe/listen below, more from me here tomorrow.