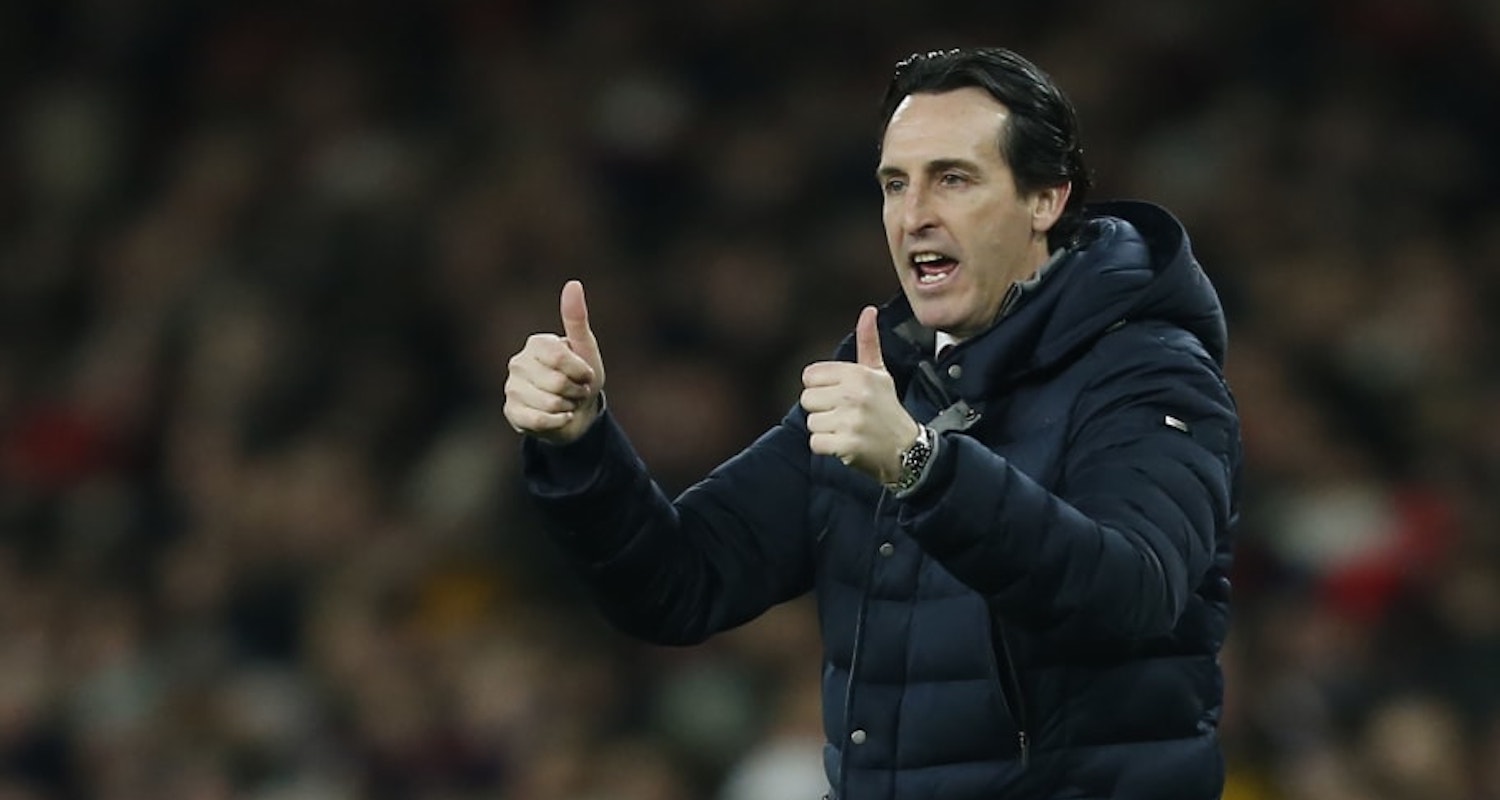 Another weekend, another London derby, but a very different Arsenal. After losing at West Ham the pressure was on Unai Emery and his team against Chelsea on Saturday evening. Lose and they could wave goodbye to a top four spot with January not even close to being over. Win and, well, we live to fight another day.

Heading into the game there were already reasons for optimism. Since the opening day defeat to Manchester City, Emery’s Arsenal have looked good in the two ‘big’ home games against Liverpool and Spurs. On top of that, Chelsea weren’t in the hottest of form themselves.

Emery is notorious for focusing his sides around the opposition, a tactic that looks more likely to benefit Arsenal in the truly testing games than the ones they’re actually expected to win. This was no different. For anyone who has seen much of Chelsea this season, it’s striking how differently they play than under previous managers. Maurizio Sarri wants to dominate possession and press strongly, with midfielder Jorginho very much the on-field conductor.

Looking to stop the deep-lying midfielder, Arsenal lined up in a 4-4-2 diamond shape, using Aaron Ramsey as Jorginho’s direct opponent and close follower. Ramsey’s intensity and discipline set the tone for the rest of the team. Arsenal pressed in a strict man-orientated manner, with the strikers and wide central midfielders sharing the duty of pressing the full-backs and Ramsey concentrated on Jorginho. It worked a treat.

Arsenal generally allowed Chelsea’s centre-backs some time on the ball, using two main pressing triggers to crank up the intensity. The most obvious was a pass into Jorginho, which prompted Ramsey to move even closer to him from behind, forcing him to play a backwards or sideways pass immediately.

As Ramsey closed down Jorginho, his Arsenal team-mates pressed the Chelsea midfielder’s options. This was the case from the get-go. In the image below, Guendouzi sprinted towards Azpiliceuta, the intended recipient of Jorginho’s imminent pass, and the ball went out for a throw. As Guendouzi moved forward, Granit Xhaka moved to N’Golo Kante and Alexandre Lacazette’s positioning blocked a pass to Mateo Kovacic, as well as preparing him to press David Luiz in case the ball went back.

Just out of shot, Lucas Torreira is ready to press Kovacic or Chelsea left-back Marcos Alonso at the bottom of the image, while Sead Kolasinac is closely following Pedro to the top-left of the screen. Jorginho could get on the ball but Arsenal starved him of options.

Saturday’s game saw the Italy international complete 68 passes. He’s completed fewer in just six games this season, of which Chelsea have won just two. He also posted his third lowest pass completion rate of the season (85%), with Chelsea losing to Tottenham and drawing with Southampton in the two games where he’s misplaced more of his passes.

If one pressing trigger was a pass into Jorginho, the main one other was a pass to a full-back. Mateo Guendouzi and Lucas Torreira did a superb job of shutting down Cesar Azpiliceuta and Marcos Alonso respectively. Torreira in particular caught the eye with his trademark tenacity. The Uruguayan snapped up and down the right flank, winning nine tackles. His previous best tally of the season was five tackles won at Southampton. Incredibly, four of his tackles won came on the right touchline in Chelsea’s half, all in the opening 40 minutes of the match.

Guendouzi may not have been as involved but he was no less active on the opposite side, harrying Cesar Azpilicueta whenever Chelsea hoped to release their captain.

While Ramsey’s work following Jorginho stifled Chelsea, it was the work of these two midfielders, plus the strikers, that really prevented the guests from finding alternative ways of escaping the press. The use of two strikers – Aubameyang and Lacazette – only made it harder for Chelsea to find solutions. The pair were tireless in their efforts to close down the opposition backline. Arsenal’s entire setup was something of a double-edged sword for Azpilicueta and Alonso.

The latter in particular usually enjoys driving upfield but was pinned back by Lacazette. The two Spaniards looked wary of leaving their centre-backs 2v2 against Arsenal’s forwards on the break. On top of that, the man-marking in midfield forced them to sit deeper and provide options on the ball. In turn, it meant fewer Chelsea players could take up dangerous positions further upfield and even if the visitors did break through Arsenal’s press, they were never able to overload attacking areas of the pitch.

As if that wasn’t enough, Lacazette and Aubameyang even chased back to follow the full-backs deep into Arsenal’s half when Chelsea were able to move the ball further up the pitch.

After the break, with a two-goal lead, Arsenal caught their breath and sat back more, looking to manage Chelsea in a deeper block. The tone had already been set for this game with the first half lead, the pre-game plan had already worked.

Typical shapes with Arsenal in possession

Lining up in the diamond shape also obviously saw different patterns emerge in attack. The key to it all was balance. The diamond formation is naturally narrow but Arsenal, with a mixture of their strikers, midfielders and full-backs, managed to occupy wide areas relatively well.

As mentioned above, Arsenal managed to pin back Chelsea’s full-backs with the strikers peeling into wide areas. Alexandre Lacazette in particular is excellent with his movement into the channel, while Aubameyang is more likely to hang out wide before drifting into central areas to pick up the ball in front of goal. One such move saw both strikers combine these facets of their game, with Lacazette receiving the ball wide and Aubameyang almost converting. The space in behind Marcos Alonso is definitely the one to attack against the Blues and Arsenal exploited it well, even if it didn’t yield a goal. 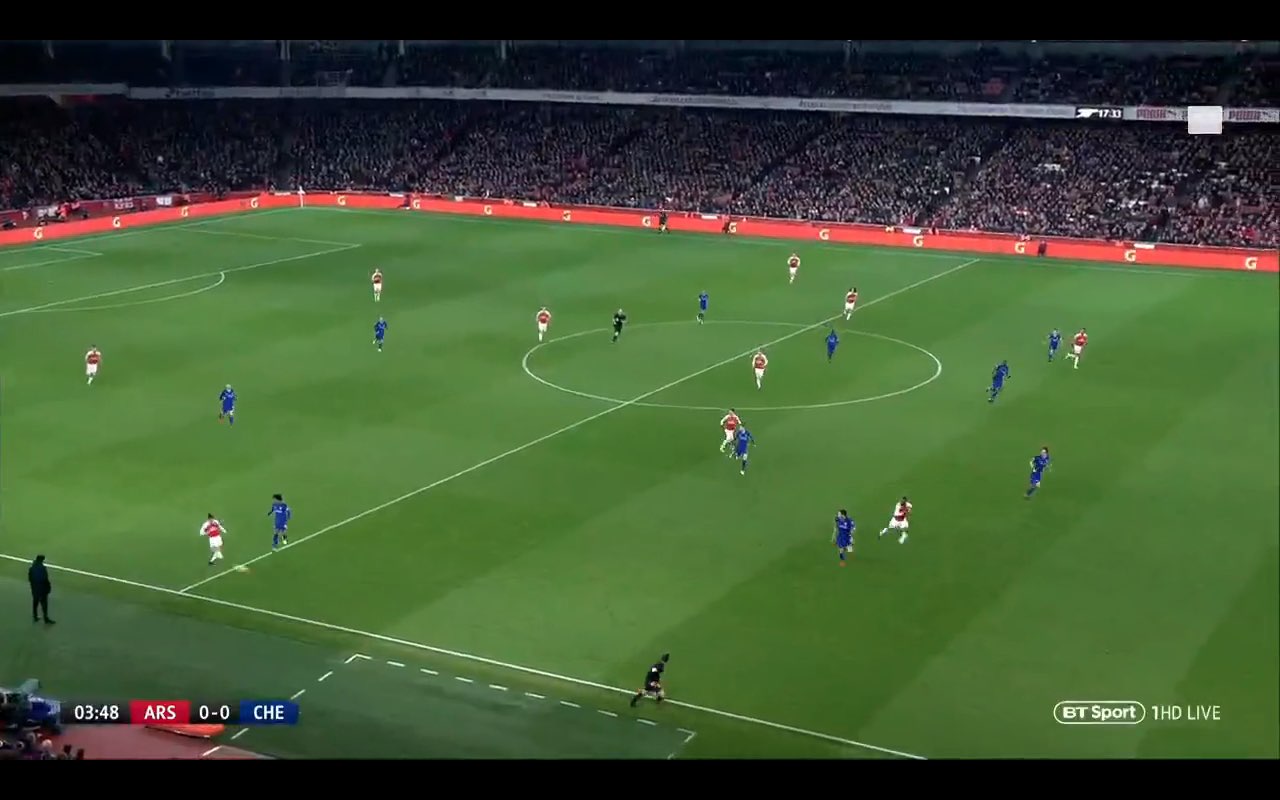 Hector Bellerin’s role in this chance was interesting and reminiscent of a superb pass he played to Aaron Ramsey before Arsenal equalised against Tottenham back in December. Bellerin is usually considered a really offensive right-back but was given more of a playmaking role, balancing both the backline and the right-flank. While Sead Kolasinac galloped forward in typical fashion on the left, Bellerin was much more reserved in his positioning throughout the game. Just look at the heatmaps for where their touches came against Chelsea.

People may remember Wenger pairing Lauren and Ashley Cole or Sagna and Clichy. Well, Bellerin is the ‘Lauren’ of this particular pairing, even though many would peg him as more of an Ashley Cole type wing-back. This, though, seems a sensible use of the two. For a defender, Kolasinac is incredible in the final third and has been one of Arsenal’s key creative outlets this season. In fact, he’s been one of the key creative outlets in the league – of players with more than 500 Premier League minutes, Kolasinac ranks fourth highest for expected goals assisted per 90 minutes (Understat). Only Alexis Sanchez, Ryan Fraser and Leroy Sane are creating more good chances than the Bosnian.

As for Bellerin, his passing from deep is often overlooked and certainly underrated. With Arsenal’s current centre-back options not exactly the best at building play, it’s useful to have Bellerin play deeper, taking some of the burden off of Granit Xhaka. On top of all that, Alonso is a far more aggressive attacker than Azpilicueta, so having Bellerin more restrained makes sense on that front too. And it worked.

The Bellerin-Kolasinac axis wasn’t the only balancing act going on as Arsenal looked to get the ball in wide spaces. Despite technically playing in the same position on opposite sides, Lucas Torreira and Mateo Guendouzi interpreted their roles very differently when the Gunners had the ball.

With Bellerin hanging back, Torreira actually almost played as a narrow right-midfielder, while Guendouzi was more likely to be found covering for Kolasinac, playing much closer to Granit Xhaka. A look at their touch maps shows a similar contrast to those of the fullbacks.

Torreira got his touches wide and high, Guendouzi hung back to manage the space left by Kolasinac’s marauding and provide a similar role to Bellerin’s on the right. Two small adjustments that allowed Arsenal to attack on the flanks despite the narrow midfield and not leave themselves on the break.

Lastly, the actual line-up itself provided a balance that hasn’t always been there this season. In Aaron Ramsey and Pierre-Emerick Aubameyang, Arsenal played with two players who are far more interested in other players having the ball than almost anyone else in the squad. Players who move away from the ball to create space for others, players who want to charge into space to pick up possession themselves. It’s no accident that Arsenal were able to stretch Chelsea with these two in the team, giving other players more freedom to play creatively.

A lot of focus has been on Mesut Ozil and his absence lately but Aaron Ramsey hasn’t been in the team either. It’s hard not to feel like Arsenal will always look more balanced when at least one of them plays and this game was a great example of how useful Ramsey can be between now and the end of the season. He offers something different and Arsenal’s variety on Saturday, both in terms of personnel and set up, is what made the team look so dangerous.

One thing is clear: Emery’s approach to big games can pay off. Teams like Spurs or Chelsea may adapt things but they want to define games themselves, which means you can figure out how they may approach things. Playing with intensity is one thing, and it’s certainly something that underpinned Arsenal’s performance on Saturday evening, but there was far more nuance in both defence and attack than just hard work. That level of detail deserves to be recognised as much as the team’s physical efforts and it needs to be carried into the next games for the team to really show signs of consistent improvement.

Arsenal need to become more creative in ‘easier’ matches but this was certainly a more balanced approach in a big game than we’ve been used to over the years, cancelling out the opponents’ strengths and looking to exploit their system. Not only did Arsenal endeavour to do that but they pulled it off and, for the second time under Unai Emery, won a big game.

The third could come as soon as Friday when Manchester United visit. With Ole Gunnar Solskjaer in charge, United won’t come to park the bus and Arsenal should fancy their chances against a team that will want to hurt them. For now, wins against Spurs and Chelsea should buy Emery some much-needed patience while he figures out how to get more out of his players in the games they really ought to be winning.

This performance and result doesn’t necessarily mean a diamond is the way forward but it was certainly the right approach against Chelsea’s ball-hungry midfield.