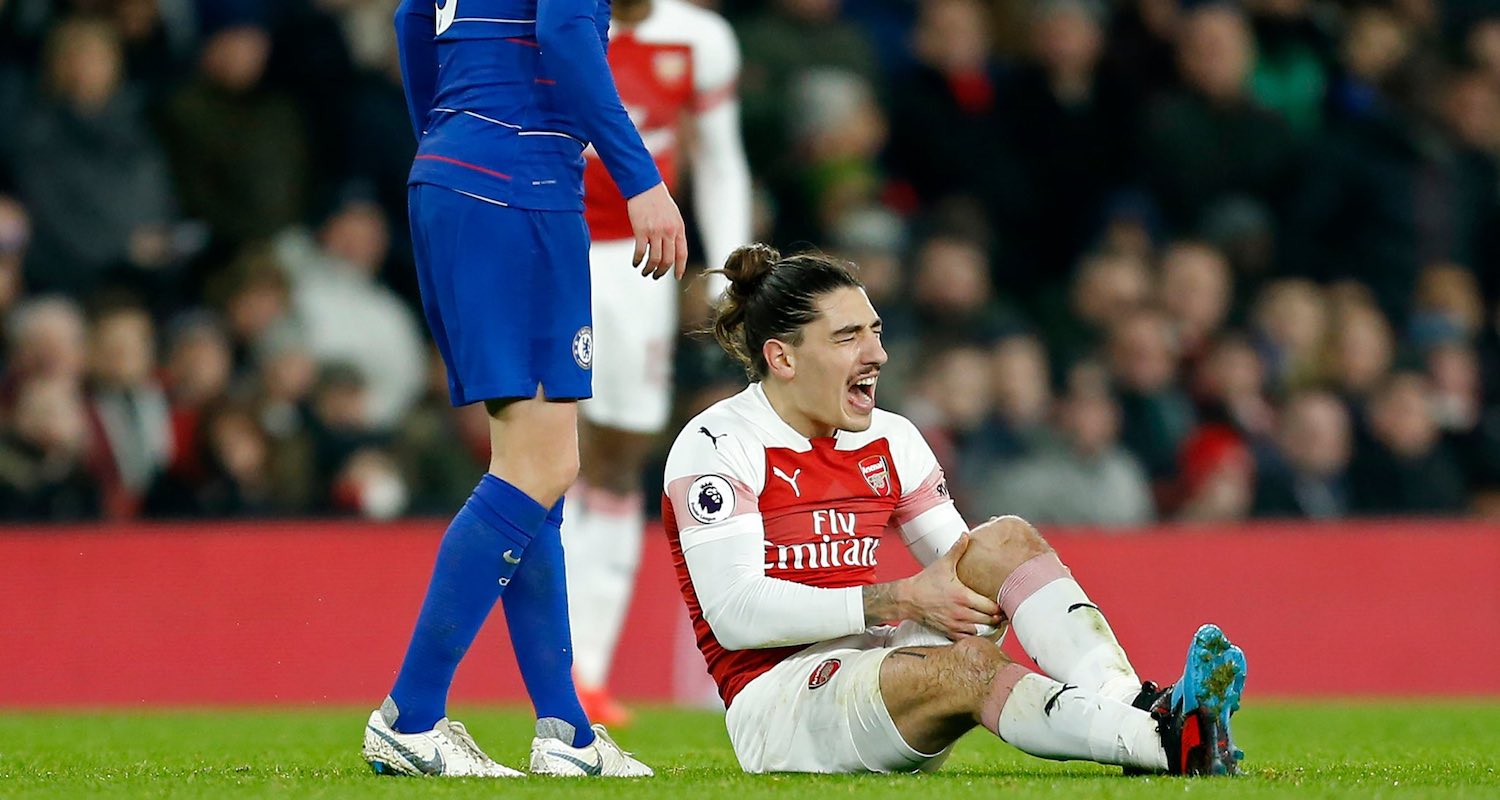 It’s bad news to start with this morning as it was revealed last night that Hector Bellerin’s injury is a ruptured anterior cruciate ligament which ends his season, and will more than likely see him miss the start of next season too.

It’s a huge blow for the 23 year old who, under Unai Emery, had rediscovered some of his best form. He has five Premier League assists to his name, only Aaron Ramsey has more for us this season so far, and was a very important part of how the head coach wants his team to play. I know he rubs certain people up the wrong way who look at his hair and his clothes and think he’s not dedicated or focused on football, but it couldn’t be further from the truth.

He’s an intelligent young man who represents this club well, so first and foremost I’d wish him a speedy and full recovery from what is still a very serious injury. It’s not the career-ender it used to be, although it can have a marked effect on players whose game is built around pace, so there is a concern there. What he has, however, is a medical/fitness team that’s as good as any other in European football, which will give him every chance to make a full recovery. I’m told he’ll be going back to Spain for the surgery, before returning to London to begin the process of rehabilitation.

It’s also a massive blow for the team, because of how important Bellerin has become due to his playing style. It’s why, in part, I wrote about yesterday about Ainsley Maitland-Niles replacing him because he ticks so many of the same boxes. Like Hector he’s very quick, maybe a bit more physical, and can defend when he puts his mind to it. If there are some reservations for me it’s that he can be a little bit casual at times, with the ball and without it, and that’s something he’d need to work on. Perhaps a run of games would help in that regard, but there’s no question it would be a gamble to throw a 21 year old into the team in a position that isn’t necessarily one he considers natural to him.

What I don’t expect is for Arsenal to go into the transfer market to help offset Bellerin’s absence. Stephan Lichtsteiner and Carl Jenkinson are both at the club, while at a push Shkodran Mustafi can play as a right back, having done that for Germany and Sampdoria in the past. Whatever you or I might think of all three of those options, I suspect the powers that be will look at them, as well as Maitland-Niles, and tell Emery he’ll have to deal with Bellerin’s absence without any help from them in the market.

I have to say I feel for him in that regard. He’s now lost three important first team players to long-term, serious injury. Danny Welbeck’s broken ankle coming before cruciate injuries to Rob Holding and now Bellerin, and in each case he’s had to cope without any investment, looking to those famous ‘internal solutions’. Even one serious injury can have a detrimental effect on how a manager can set up his team, Emery is now having to cope with three and receiving no backing from the club in the transfer market. That’s tough, verging on unfair.

According to a Tweet last night from David Ornstein we’re looking to do two loan deals this month. One of them is Denis Suarez, there’s no hint at who the other might be – but neither deal is close and in the meantime Emery has to rethink his plans which would have included a fit and healthy Hector Bellerin. When you consider some of the other issues he has to face in terms of player performance and player quality, the injury to his best right back is a real kicker.

There is still time this month to get things done, but it’s now January 22nd and so far we’ve been inactive in the market. We’re not alone there in fairness, it’s been a surprisingly quiet transfer window so far, but that doesn’t mean we don’t have a need to bolster the squad. Whether the issues behind the scenes are playing a part here we just don’t know, but yesterday the club confirmed the news that Sven Mislintat would be leaving – his departure date set rather arbitrarily at February 8th (your guess is as good as mine).

Does that mean he’ll be working hard until the end of this month to find us players? If things have gone so wrong that he’s leaving after just 14 months, you’d wonder what kind of a part he’ll have to play during this window. Is he motivated to unearth one final gem as a parting gift? Would his recommendations now even hold any sway with the people who have decided our recruitment policy needs to go in a different direction? It’s all a bit of a mess.

These things happen though when organisations go through the kind of seismic restructuring Arsenal has over the last little while. Personalities clash, there’s a power vacuum to be filled and there are always casualties. Mislintat appears to be one of them, and now it’s down to who replaces him and when. In terms of the scouting aspect, there are suggestions that Francis Cagigao could be that man. He’s been scouting for the club across Spain/Portugal for years – and was the man who spotted the likes of Bellerin, Lauren and famously Cesc Fabregas.

He is well thought of across European football, and was tipped with a departure not too long ago, with Real Madrid one of the many clubs interested in him. If it is him, let’s hope it’s done quickly, because the plans we have for the summer recruitment need to be underway now. The building blocks for the deals we want should be put in place as early as possible so we can get it all done as efficiently as possible – particularly when we appear to be eschewing the idea of spending money in January for that very reason.

There’s also a plan to appoint a Technical Director – the job Mislintat was promised by Ivan Gazidis before he legged it to Milan, and which caused the rift that’s leading to the German’s departure. The name of Monchi, who did that job at Sevilla and is currently Director of Football at Roma, has been mentioned (amusing if you listened to the Arsecast with Philipp Auclair last week), but that seems a long-shot to me. According to David Ornstein there’s no fixed timescale for this appointment, but like the Head of Recruitment, the sooner we make one the better for all kinds of reasons.

I think there’s another post for another day about how things behind the scenes, regardless of how much change has happened, seem a bit rudderless. There is no obvious figurehead with overall responsibility, and I’m not sure this semi-collaborative model we have with Raul Sanllehi and Vinai Venkatesham sharing the duties of a CEO is necessarily the best, but I’ll come back to that another day.

For some extra reading this morning, we have a new tactics column from Lewis who looks how the deployment of the midfield diamond was key to the 2-0 win over Chelsea. Check it out here.

Finally, if you haven’t had a chance to listen already, there’s a lot to get through on this week’s Arsecast Extra, and all the links you need to listen/subscribe are below. Till tomorrow.