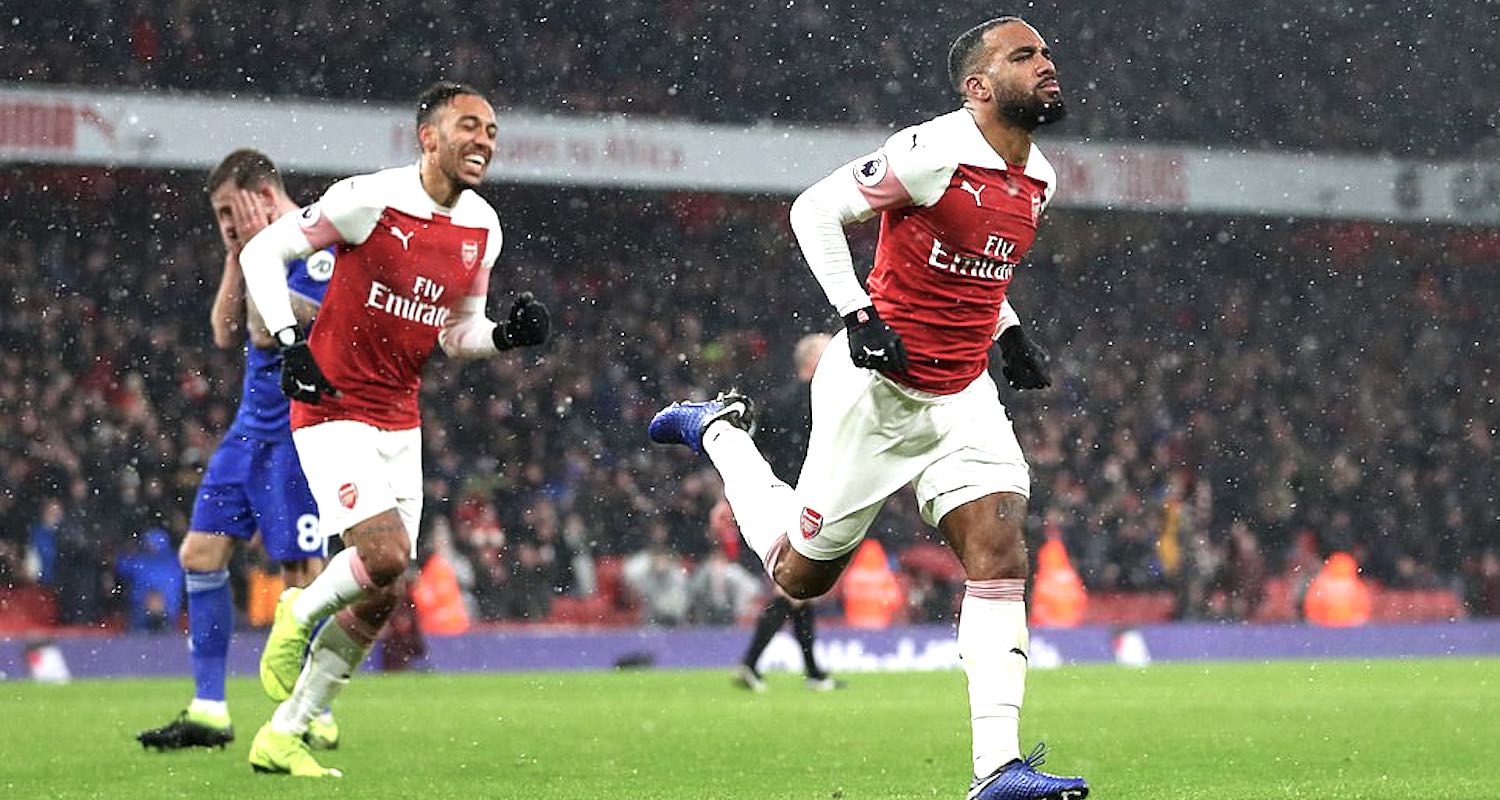 It was the 66th minute before Arsenal had a shot on target in last night’s 2-1 win over Cardiff at the Emirates: and that was Pierre-Emerick Aubameyang’s penalty which put us 1-0 up. Until then we had huffed and puffed, but not come even remotely close to blowing the visitors house down. In fact, they had by far the better chances, Bobby Reid with two first half opportunities which a better player would have taken.

That has been the story of life under Unai Emery though. The opposition get chances, it’s a recurring theme, and in the end they had 19 shots in the 90 minutes to our 15. That it took the penalty to get us going was worrying, and the first 45 minutes was about as bad as it’s been this season, or any other in recent memory, against a team of this calibre.

You can point to the two penalties we should have had in the first half, but even so that’s still what it would have taken for us to test their keeper. On those, I think Alexandre Lacazette has to go down under the challenge for the first one, but even when did just that for the second one Mike Dean just Mike Deaned, so maybe it wouldn’t have made any difference. It’s worth pointing out that Cardiff should probably have had a penalty before we did, so it’s swings and roundabouts a bit.

Emery’s team selection saw him pick a three man midfield with Mohamed Elneny starting for only the second time in the Premier League this season, alongside Lucas Torreira and Matteo Guendouzi. Mesut Ozil returned to captain the side but with nobody really to connect him to the deep lying midfield and the two strikers, he didn’t have a huge amount of impact. He dropped deep to pick up the ball and to try and make things happen, but the inherent conservatism of that system made it difficult for him to join the dots when we got forward.

The first 45 minutes were so bad that a half-time change was inevitable, Alex Iwobi replacing Elneny. He is a positive player at least, but in the first stages of the second half didn’t do a great deal to change the game. It felt like another change was needed, surely Aaron Ramsey from the bench would be the one, but after an hour in which we hadn’t troubled their keeper one bit, Emery sent on Carl Jenkinson for Stephan Lichtsteiner.

I think we all enjoy Jenks’ Gooner credentials and he got a big cheer coming on, but that’s not the kind of change which is going to really alter the dynamic of a game or a performance. It probably just tells you something about Lichtsteiner above all else. It wasn’t that he was particularly bad, he just offers this team nothing down that right hand side at all. It’s like having a ghost play right back or something. I know he has experience, but you wouldn’t play a Galapagos turtle in your back four. His signing was always a strange one, but it’s clear he’s struggling to have any impact whatsoever in this team given the way we kinda, sorta think Emery wants us to play.

Iwobi then found Kolasinac with a lovely ball behind the defence, he was taken down, third time was a charm with Mike Dean who pointed to the spot, Aubameyang stepped up and stroked home the penalty to make it 1-0. Ramsey replaced Ozil, Lacazette got booked for diving and that seemed to annoy him and possibly led to his superb driving run and finish for our second. He was probably our best player on the night – alongside Guendouzi who had a storming second half after a difficult enough first period – and at 2-0 that was surely that.

In the five minutes of injury time we displayed those defensive frailties again, allowing Cardiff to get one back a bit too easily, meaning this was yet another game without a clean sheet. I know we have defenders out, but our ability to concede to anyone at almost any time is a real worry. And when you let Cardiff have more shots than you a few days before you’re about to play a Man City side who will be desperate to respond to their 2-1 defeat to Newcastle last night you can’t help but be fearful.

There were late chances for Ramsey and Aubameyang to make it 3-1 but in the end we saw the game out. First things first: the need for three points was far greater than the need for a performance, but we’re at a point in the season when you can’t simply look at the result and say that’s all that counts. We’re now at the end of the sixth month with Emery in charge, and I’m still trying to figure out what he’s doing and why on earth there hasn’t even been a slight defensive improvement.

I don’t think the constant tinkering with team selection and formation is particularly beneficial, and I struggle to understand the safety-first approach when you’re playing a team like Cardiff at home, with all due respect to them. It’s not that I expect us to be brilliant in every game or something, but even with the absences, I think this is the kind of game Arsenal should control and dominate, not go over an hour without a shot on target and our answer to that is to put on our fourth choice right back who probably wouldn’t even be at the club if he hadn’t picked up an injury in pre-season.

Emery clearly needs some help from the transfer market, and it looks as if we’re going to get that in the shape of Denis Suarez whose arrival on loan appears to be imminent. On top of that we appear to be still chasing a winger, with Perisic and Carrasco mentioned as possible candidates, so maybe if those players come in he’ll feel like he can play the kind of football he wants.

I’m as into new signings as anyone else, but I do wonder if we’re putting a lot of stock in their ability to have an impact. Not just in English football, but in the way Emery thinks about the players he has and the way he uses them. It’s just a feeling, but I don’t think after 6 months he knows what his best team is, or what the best formation or system for this group of players is, and while I accept he’s been badly hit with really unfortunate injuries, the continued absence of any real footballing identity worries me.

All that said, we now sit level with Chelsea in 4th place, Manchester United dropped two points last night, and we have shown an ability this season to ride our luck/grind out results – you can delete where you think appropriate there. Going to face Man City on Sunday we’re going to need to be a hell of a lot better than we were last night, because Sergio Aguero won’t spurn the chances Bobby Reid did. In general, that trip to Anfield apart, we’ve been competitive in the ‘big games’, and we’ll need to see that again at the Etihad, but make no mistake it’s going to be a hell of a challenge.

Maybe it will be a squad with a couple of new additions who can make a difference to how we play or how we’re set up, so let’s keep fingers crossed for that. The transfer window closes on Thursday at 11pm, and last night’s game was further evidence that Emery needs help from the club in the transfer market. I think we have a right to expect a bit more than we got last night, but it doesn’t negate the absolute need we have to boost the squad in terms of depth and quality so let’s hope he gets some of what he needs in that regard.

In conclusion: a very welcome three points but we really, really make hard work of it sometimes, and it’s not particularly pretty to watch when we do.