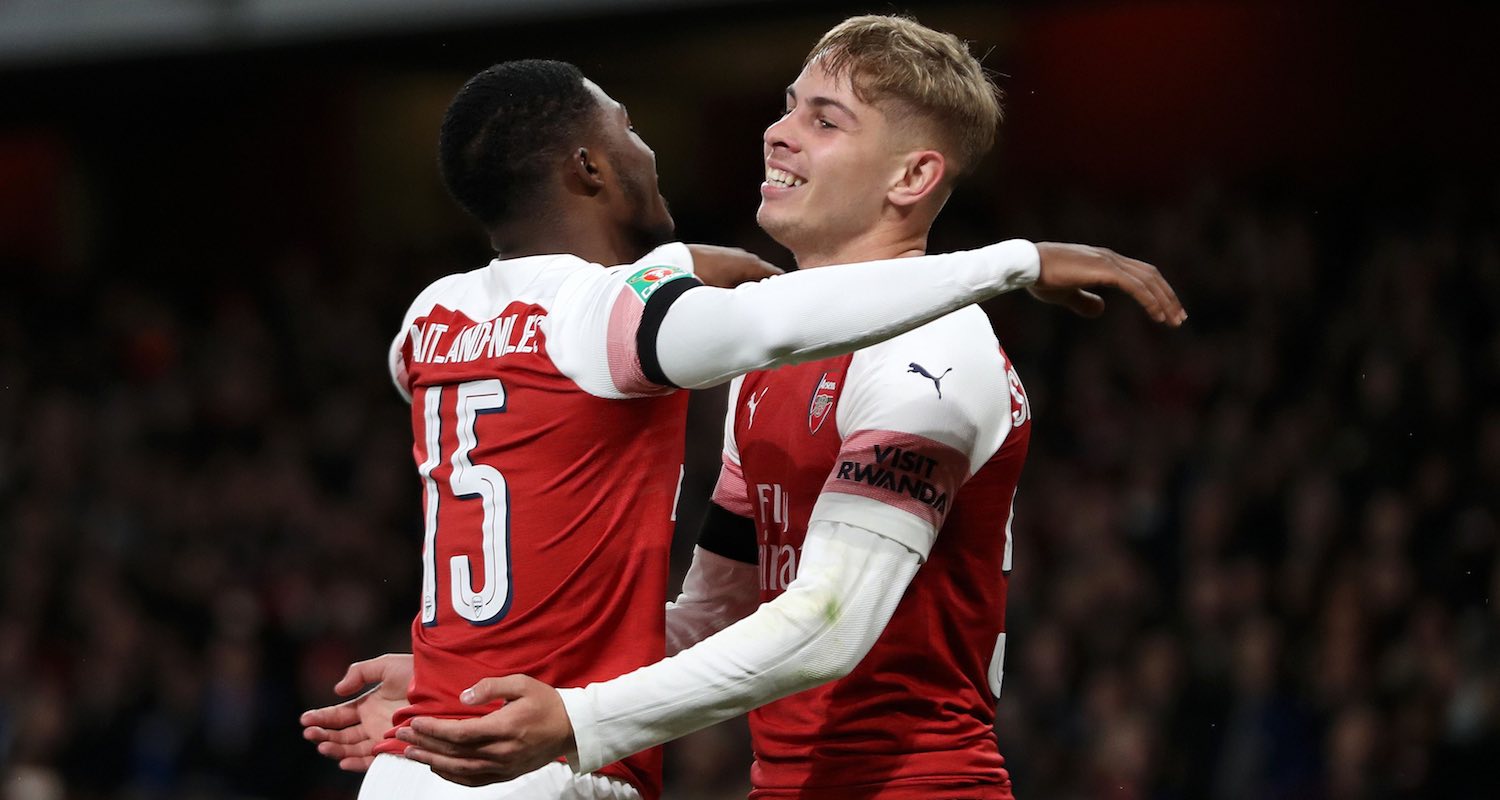 In relation to yesterday’s blog about whether or not Laurent Koscielny should get some  time tomorrow night for the Qarabag tie, the consensus was more or less in favour of him playing some part in the game. Asking him to play 90 minutes, then line up for his first Premier League appearance of the season on Sunday is too much, but a bit of match sharpness seems to be the right idea. We’ll wait and see what Unai Emery has to say about that today when he meets the press, but this final Europa League group game might well be useful for other players too.

Think of Ainsley Maitland-Niles who has found himself very much on the fringes this season. In some ways he’s been unfortunate, picking up a relatively serious injury on the opening day when the new boss started him against Man City. Sure, part of that was because we had no Sead Kolasinac or Nacho Monreal and our options at left-back were limited, but it was a chance to impress. Instead, he found himself sidelined for two months.

He then came back to a team which was in the middle of an unbeaten run, the midfield was chock-a-block with options, Emile Smith Rowe had taken up the baton as our most promising academy graduate, and he’s been restricted to just four appearances. Arsene Wenger often spoke of him as a potential central midfielder, but when you have Lucas Torreira, Granit Xhaka, Matteo Guendouzi and probably even Mohamed Elneny ahead of you in that position it’s understandable that he hasn’t made a Premier League appearance since the opening day. Realistically and practically, you can’t drop any of them for him.

In the Carabao Cup, Emery played him on the right of the front three, in the game against Vorskla he played as a left-back, and while I expect him to start tomorrow night against Qarabag, it’s hard to say exactly where. He could play in either full back position, in midfield if the boss wants to preserve Guendouzi for the upcoming festive schedule – something I’d be inclined to do if it were up to me – or further forward.

That versatility could prove very useful over the coming weeks where there’s already a lot of football to play and potentially a bit more. If we come through the Carabao Cup tie with Sp*rs, we’ll have a two-legged semi-final to contend with in January as well as Premier League and FA Cup. It will stretch a squad which is beginning to creak a bit even further, so Maitland-Niles’ ability to slot into the team in various positions could well stand him in good stead.

In the longer-term though, versatility can prove a bit of an impediment, unless a player is happy to be that kind of utility man. It’s hard not to think of Alex Oxlade-Chamberlain who, in seven years at Arsenal, never nailed down a position that made you think ‘Oh, this is where he should play every week’. There were excellent performances in the centre of midfield, excellent performances on the wings, but for every good one there were a host of indifferent or average ones. So, for Maitland-Niles, there’s a danger that his versatility could become a problem too.

It’s probably also fair to say that Emery hasn’t seen a lot of him in competitive action. He’ll be aware of his qualities from the training ground, but seeing a player perform in more pressured situations is usually how managers make up their minds. If he can catch the eye tomorrow night, even if it is in a dead-rubber game against opposition nobody would consider top quality, it might go some way to reassuring the Spaniard that he’d be ready and able for more important games.

Speaking of Smith Rowe, tomorrow night is equally as important but for different reasons. This season he’s caught the eye in a big way. We’ve all seen talented youngsters come in and impress during the League Cup and occasionally in less important European games, but it’s rare that an 18 year old can combine obvious talent with end product. He has two Europa League goals, a Carabao Cup goal, and a goal in the Checkatrade Trophy (in which our U21s played against senior teams –  he scored in a 3-0 win away to Coventry).

At some point Emery is going to have to think about what he’s getting from some of his more senior players. Henrikh Mkhitaryan, for example, has just 2 goals and 1 assist in 13 Premier League appearances this season. When you’re paying a player north of £200,000 a week there is a measure of expectation that comes with that, and right now it’s hard to say we’re getting as much as we should for our outlay. I know many want to separate wage packet from performance, but often those people suggest that there’s a direct correlation between what a club like Man City can spend on players and their wages, and their success. To me, it’s relevant, and I think we should be getting more from a player who is in the team to contribute in that area of the pitch.

There are often criticisms of Alex Iwobi for similar reasons (he has 1 goal and 3 assists in 13 Premier League appearances), but in mitigation he’s much younger, still developing and on a much less significant wage. That’s not to say we shouldn’t look for someone who can do more, but I think there’s a difference between the two on that level. However, in order to prevent an over-reliance on from our strikers – and let’s not forget it was our nominal DM who scored vital goals in two of our last three games – we need these players to start producing more in the final third.

If Smith Rowe can again show that there’s end product to his game tomorrow night, he’ll be very much in the thoughts of Emery as this season progresses. Maybe not so much as a starter, but as an option from the bench – particularly as we look to cope without the attacking threat that Danny Welbeck gave us as a striker and someone who can play in the wide positions.

Qarabag is a fixture which means little in the wider-context of our season, but for some players it’s a game of real importance. It’d be great to see them take that chance tomorrow night.

News from the press conference and more throughout the day on Arseblog News. For now, take it easy.