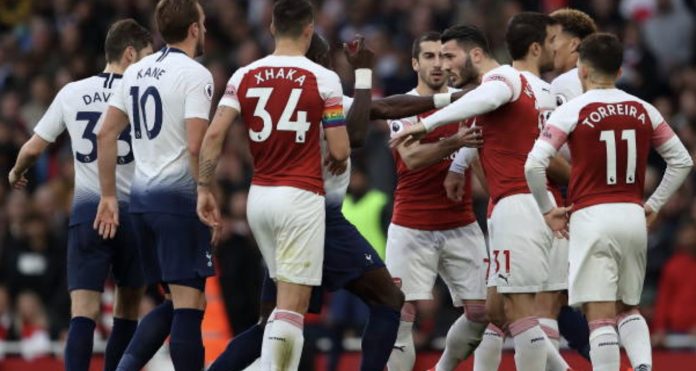 Morning all. The derby stuff continues with the news that the FA have charged both Arsenal and Sp*rs for failing to ‘ensure their players conducted themselves in an orderly fashion’.

I take great exception to this. Under Unai Emery there’s been a real focus on hard work, organisation and tactical discipline, so to suggest our involvement in the sideline handbags was a failure in any way is completely wide of the mark. Look at Matteo Guendouzi, chasing back to get into position, providing cover to the veteran Stephan Lichtsteiner, while Aaron Ramsey’s display as an onlooking trequartista was simply a taste of what was to come when he was introduced as a substitute in the second half.

That lot, on the other hand, were a higgledy-piggledy rabble, unable to react properly outside the confines of their own training ground work. Mauricio Pochettino had not considered the possibility of Eric Dier doing anything useful so, when he flicked the ball on with his small planet of a head and got lucky when Bernd Leno fumbled it, his reaction left his own teammates aghast.

“Shhhh?” thought one. “But there’s still an hour of this game to go. It’s not like you’ve scored the winner in the last minute here. They could very easily change the game and you would look very foolish indeed for your over-celebration this early in proceedings.”

Lo and behold, a deflection and a moment where the gravitational pull on his cranium saw him plummet to the ground as Lucas Torreira zipped past him like a Uruguayan meteorite, the prophecy became true. Arsenal had remained in control throughout the game, Emery managed his side perfectly on the pitch and off it where despite their involvement in the sideline contretemps none of them were booked.

There is a serious point in all this though: which is that FA charges for incidents which go beyond the pale are both understandable and necessary. For this though? A bit of handbags in a North London derby? Isn’t that we all want to see? We’re not talking about an incident in which punches were thrown or, heaven forbid, someone is picked up by the throat and dangled in the air until his face turns blue like I’d like to see Kolasinac do to Dele Alli.

This passion and intensity is part of the game, and it – whether the FA like it or not – contributed to the fantastic atmosphere at the Emirates on Sunday. It resonates with fans. Everyone I’ve spoken to in the last couple of days, Arsenal fans or otherwise, thoroughly enjoyed the derby not just because of the football or that a Sp*rs team that is so easy to dislike got beaten, but because of the occasion too. The energy that came from the players transmitted to the fans and vice versa.

Of course there’s a line that shouldn’t be crossed (choking, blue face etc) but at a time when the Premier League is in danger of becoming a tedious one-horse race in terms of the title, you’d think there’d be an awareness that further sanitisation of the game would be a bad thing. It doesn’t mean you have to let it descend into Rollerball territory where players are maimed and killed for our entertainment, but when there’s an incident that really doesn’t merit charges you could probably just have a quiet word with both clubs and leave it at that.

Anyway, for me that side of things was one of the most enjoyable aspects of Sunday’s win. I loved that there was a bit of niggle, some aggression, and that this group of Arsenal players were quick to have each others backs. It speaks to a team spirit and togetherness that is very useful for all kinds of reasons, and maybe puts to bed a bit the perception that we’re a nice bunch of lads.

Niceness in itself isn’t a bad thing, but it is possible to be a bit too nice in football terms and I think we’ve maybe been too far this side of that line for a while. Again, I don’t mean to say we should become a team of Vinnie Jones crossed with wolverines, but on the pitch being prepared to mix it, to look after your teammates, and showing you won’t be intimated by some bloke whose head resembles a basketball with a buzz-cut is important. We did that on Sunday, and I’m sure Unai Emery will be quietly pleased with how his players responded in that regard.

Meanwhile, we face Manchester United at Old Trafford tomorrow with Emery saying he’s not sure if Mesut Ozil will be fit to play. There’s also an injury doubt over Shokdran Mustafi who limped off during the second half of Sunday’s derby. We’ll get further updates on fitness and team news later on, and we can preview the game properly in the morning. What a week it would be if we could go there and get a result, but more on that in the blog tomorrow.

The draw for the third round of the FA Cup took place last night. Arsenal will face either Blackpool (League One) or Solihull Moors (Conference) away from home. Those two face off next week in a replay having drawn 0-0 in their first game, and for the non-league side it’s an extra bit of motivation when the prize is a ‘glamour’ tie in the third round in early January.

Finally for today, a word of thanks to all of you for your votes as Arseblog took home the prize for Best Fan Media at the FSF Awards last night. There was some real quality in the other nominations for this category, so it’s very pleasing to have won. I couldn’t be there but James and Andrew Allen went along to the ceremony, looking very dapper indeed, and picked up the trophy. I have yet to get the full details but I believe James may have inadvertently insulted host James Richardson in his acceptance speech, but it’s all good I’m sure.

Beyond that, I’d just like to let you know how much we appreciate your support for everything we do on the site. There’s a really great team of people here making Arsenal stuff for you to read and listen to (and sometimes watch!), and I’m delighted for them that the hard work and energy they put into it has been rewarded. We’ll keep doing what we do, and hopefully you’ll continue along with us for what has been a nearly 17 year ride at this point.

Right, we’ll have all the pre-Man Utd stuff on Arseblog News throughout the day. More from me tomorrow.