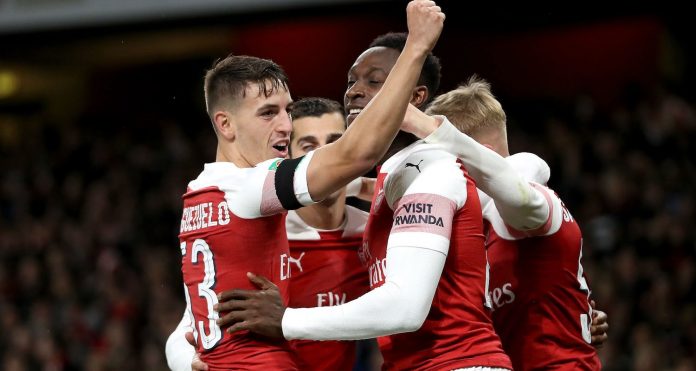 As expected Unai Emery’s team selection for last night’s 2-1 over Blackpool was heavily influenced by the visit of Liverpool this Saturday. Only Matteo Guendouzi and Shkodran Mustafi remained from the side which began the game against Crystal Palace on Sunday, while Carl Jenkinson started his first game in two years at left back and there was a full debut for young Spanish centre-half Julio Pleguezuelo.

There now follows an in-depth look at most of the first half:

To say it was dull stuff would be doing dull stuff a disservice. The most exciting thing was watching how many times Blackpool could successfully deflect the ball behind without conceding a corner. The referee’s inability to see it on at least two occasions was in stark contrast to his ability to see Matteo Guendouzi’s 19th minute foul as a yellow card, something which would come back to haunt the young Frenchman a bit later on.

Before that though, he provided the first half with its first moment of real quality, spreading the ball wide, getting it back, and then picking out the darting run of Stephan Lichtsteiner with an excellent pass that the Swiss international poked home on the stretch to wrong-foot the keeper and put us ahead. It was a good run, an even better pass, and the 34 the former Juventus man became the oldest player to score for us since Sol Campbell, then 35, scored against Porto in 2010 (via OptaJoe).

We doubled the lead five minutes into the second half when Welbeck burst down the left and played it to the marauding Jenkinson. His cross wasn’t great but when the keeper flapped at it it landed at the feet of Emile Smith Rowe who bounced it into the ground and into the roof of the net for his first goal at the Emirates.

At that point you felt it was going to be plain sailing, and Mustafi missed a chance to make it 3-0 with a header that went just wide, before the eagle-eyed referee saw Guendouzi pull back an opponent and deemed the challenge worthy of a second yellow. In truth, I thought his first booking was softer than the second, but maybe it’ll be a bit of a lesson for a young player to take just a bit more care when on a yellow card. It means he’ll miss the Liverpool game this weekend, which is a bit of a shame as our midfield options aren’t exactly fantastic, but we do have Aaron Ramsey and Ainsley Maitland-Niles return from injury last night was timely in that regard.

Blackpool defender Paudie O’Connor hit the bar with Cech nowhere near the ball, a warning sign for our defenders which we didn’t pay enough heed to because the same man headed them back into contention with about 20 minutes to go. Our defending was not great, with Ramsey and Mustafi far from strong enough, which meant things were a bit more difficult for the ten men.

That was until they were reduced to that number too, O’Connor given a straight red for a scything foul on substitute Pierre-Emerick Aubameyang inside the Arsenal half. I wonder how outraged our fans would have been to have a player sent off for that as opposed to the two yellows, but it meant we could more or less control the final few minutes plus an amazing six minutes of injury time from nowhere and see the game out to go through to the quarter-final.

A quarter-final, by the way, which will see us play Sp*rs at the Emirates, a little over two weeks after we host them in the Premier League, so that’ll add a bit of spice to this competition which has, it’s fair to say, been pretty forgettable fare thus far.

That is football. When you are playing, when you are on the pitch, you can have things positive or negative. Like an injury, a red card or 90 minutes of hard work. With the red card, it’s like that. It’s football. He is competitive. The action is one action. He plays this action … he played how the action demanded and the red card is one circumstance in the game.

From which I get the sense he’s not that upset by it from the point of view of the player doing something too stupid. Anyway, the red card is a rite of passage, and if it makes him learn how to foul with greater slyness in the future then maybe that’ll be a positive. A positive action in the process.

And on the performance overall:

I think we controlled a lot of moments in the match. We can and we need to continue our work to the last minute with our performance and our players to win today. But I think that doing our work, we deserved this victory also.

And I don’t really know what else to say about it, other than it’s another win, and we’ve rested key players ahead of Saturday’s Premier League game with Liverpool meaning there can be no excuses when it comes to fatigue and so on. We’ll have more on that game in the days ahead.

Elsewhere, Arsenal have reportedly told Aaron Ramsey why he’s not getting a new contract. Raul Sanllehi met with the Welshman last week to clarify the club’s situation which is that they are prepared to let him go on a free transfer next summer. It’s very handy for the player who will have a choice of clubs because he’s available on a Bosman, but not so great for Arsenal who by making this decision in November rather than in the summer have written of tens of millions of pounds that could have been reinvested into the squad.

I wonder have they had the same conversation with Danny Welbeck whose contract also expires next summer. Anyway, none of it should be too surprising, and there are always two sides to a story like this, but when Sanllehi spoke last week about managing player contracts better, this is exactly the kind of situation we have to avoid in the future – particularly when 100% KSE’s outlook will ensure that every penny counts in this self-sustaining Arsenal world we live in.

Right, that’s your lot, back tomorrow with more waffle and an Arsecast. Until then.