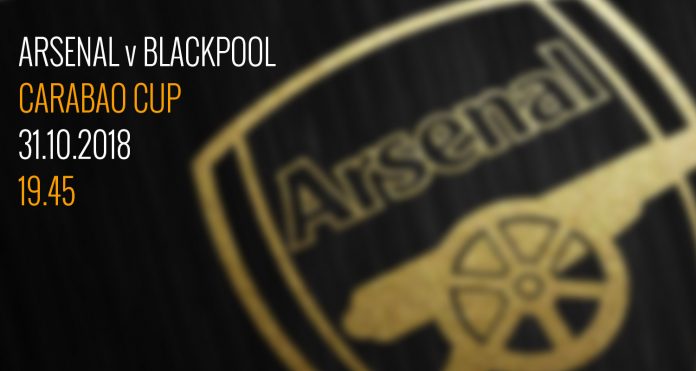 The old adage about how the next game is the most important one often rings true, but as we prepare to face Blackpool tonight in the Carabao Cup it is demonstrably not the case. Obviously it would be good to win and progress further in the competition, but Saturday’s game against Liverpool in the Premier League is of much greater significance for Unai Emery and this Arsenal team.

It’s what we do against the Mugsmashers that will help us understand better what progress has been made since the first two games of the season when we lost to both Man City and Chelsea. Since then our 22 points from 24 against relatively weaker opposition has been a fantastic return, but as our stated ambition is the return of Champions League football for next season, how we fare in these games against top four rivals will have a real bearing on whether or not we can achieve that.

As such, I’m expecting the manager to rotate his team heavily for this evening’s match, using as few players as possible that he has earmarked for a start on Saturday. Emery has confirmed that Petr Cech will play in goal as the veteran returns from a hamstring injury, but his selection in this game copper-fastens the change at Premier League level where Bernd Leno has taken his chance and deserves to keep his place as long as he maintains the quality of his performances.

Defensively it won’t be easy as we’re without Hector Bellerin whose thigh injury will continue to be assessed ahead of Liverpool, while there’s nothing definitive yet about the return of either Nacho Monreal or Sead Kolasinac which have seen us without an established left-back for the last few matches. He could play Carl Jenkinson on the right with Stephan Lichtsteiner filling it at left back, while at centre-half it’s two of Rob Holding, Shkodran Mustafi and Sokratis, unless he drafts in 21 year old Julio Pleguezuelo from the academy for his first ever start. He did train with the first team yesterday so if Emery is keen to protect his first team players he may well be an option.

An injury to Mohamed Elneny means he can’t bring his experience to midfield, which again will give the boss something to think about. He has to give Granit Xhaka a rest after playing him at left back in the last two games, and Lucas Torreira is too important to risk, so who partners Matteo Guendouzi? For me the obvious candidate is Aaron Ramsey who was on the bench last Sunday and seems likely to start there again this weekend. It’s been some time since he played as part of a midfield two, but it wouldn’t be asking him to do anything out of his comfort zone to slot in there tonight.

Ahead of them Emile Smith Rowe, Henrikh Mkhitaryan, Danny Welbeck and Eddie Nketiah would make up a decent front four against a team who sit mid-table in League One, and allow Emery to keep his big guns in reserve for the weekend. He could have a couple on the bench just for a bit of insurance, but without wanting to sound in any way dismissive of this game or this competition, if this group can’t do enough to beat Blackpool then it might be a bit of a worry but I also don’t think I’ll be shedding too many tears. I realise of course that sounds very dismissive, but it’s really about making sure we’re in as strong shape as possible for Liverpool.

We will have a live blog for you if you can’t find the game anywhere, and all the post-match stuff as usual on Arseblog News. Let’s hope it’s not a Halloween fright night at the Emirates.

Not a lot else happening from an Arsenal point of view, but I noticed a story on the Guardian about how Crystal Palace’s Wilfried Zaha says he was subject to racist abuse and death threats via social media following the 2-2 at Selhurst Park on Sunday. The assumption we have to make is that they came from Arsenal fans, as it’s unlikely that winning the penalty annoyed fans of other teams that much. I doubt anyone was so exercised and worried about the sanctity of football itself that they got on Twitter to abuse him.

The first thing to say of course is that racism in any form or death threats are simply unacceptable. Those people are contemptible, and it’s incumbent on the rest of us who have a moral compass to stand up to people like that. If they appear on your timeline, you’re following the wrong people and you should both un-follow and report those accounts immediately. Even if they are a minority, they’re a stain on this football club if their behaviour is accompanied by Arsenal related avatars or bios.

This isn’t just an Arsenal problem though, or even a football one. It’s wider than that, it’s an ongoing societal issue that spans all interests, from sport to politics to music, the arts, video games, and everything else you can think. People use the cloak of perceived anonymity to espouse their intolerance, racism, bigotry and prejudices all the time, and it’s very important to make a distinction between different points of view and opinions which are simply unacceptable in 2018 and which harm other people who are just trying to live their lives.

Imagine if Arseblog was a site where people could come and be racist every day, homophobic every day, anti semitic every day, sexist every day, with almost no moderation or consequence for saying vile things about people or directly to other users of the site. What kind of a horrible place would it be? What would it say about the person in charge?

Yet this happens on Twitter and Facebook and Instagram every day, and these platforms pay little more than lip-service to the issues because users are more important than standards. We’re part of the problem too, to an extent, because we use them. They’re fun, they’re informative, they’re useful if you use them right, but would you go to a nice pub which had a room off the side where they held dog fights?

These companies have a responsibility to combat this behaviour, and they don’t do it properly. And for those who talk about free speech, abusing people based on the colour of their skin, their religion, their nationality, sexual preference or whether you think they’ve dived for a penalty has nothing to do with that.

I’m sure Zaha knows that even if some Arsenal fans are annoyed at him winning a penalty, that’s as far as it goes for the vast majority, but until Twitter, Facebook and the like clamp down properly on things that are unacceptable to every decent person, that minority will continue to feel emboldened to cast a shadow on the rest of us.