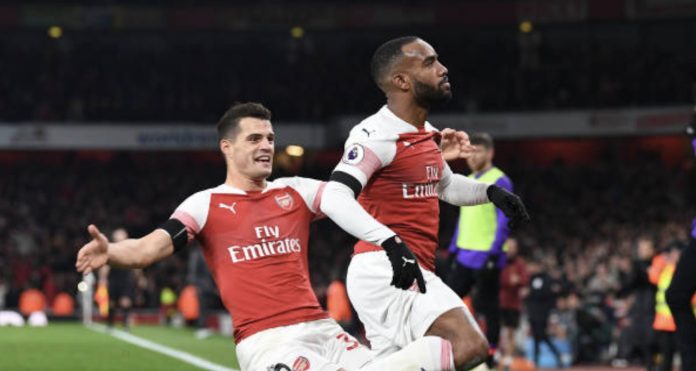 I said in yesterday’s preview blog that if we got something from the game against Liverpool, we should see it as a positive and I think that’s very much the case this morning. I should point out that I’m writing this blog having seen almost no replays or analysis of anything, so it’s pretty much entirely based on what I saw in the ground.

The team selection wasn’t a huge surprise, I thought Mkhitaryan might come in to the team to try give us some balance in the front three, while the availability of two full backs was obviously very welcome when you’re facing a team as strong in attack as Liverpool.

After what felt like a scrappy opening to the game, we had a real chance to go ahead through Mkhitaryan but he headed wide as Alisson came out of his goal and didn’t get near the ball. Liverpool then had a goal disallowed after Mane prodded home – he was certainly offside when the ball was played over the top of our defence, but apparently not when Firmino’s lob over Leno came back to him off the post.

Then a fantastic ball found van Dijk in behind, a brilliant chance for Liverpool to go ahead but he was denied by a great save from the Arsenal keeper. Lacazette fired wide after being set up by Ozil, and right before half-time they hit the post when Leno came out, much like his opposite number, and didn’t get to the ball. It was one of those that I thought was going to trickle over the line but thankfully we were spared.

For all that, it was probably the best we’ve played in a first half this season, and for now I think we have to just accept that this is part and parcel of who we are with this personnel. I’m sure Emery will improve us defensively, but it’s going to be incremental, and until he can bring players of increased quality then we’ll have to ride our luck along the way.

I haven’t seen their goal again to know whether or not Leno was unlucky or could have done better, but as soon as I saw Milner coming onto the loose ball I knew he’d score. And here’s the thing: I wasn’t expecting a clean sheet. Nobody I spoke to yesterday was expecting a clean sheet, so it was all about if we could respond, and how.

After a period following the goal in which Liverpool remained on top, we fought our way back into the game. I thought Granit Xhaka and Lucas Torreira in particular were excellent in midfield, and our better control of this area of the pitch helped us build some momentum. The Uruguayan burst through to the midfield to test Alisson, Iwobi came on for Aubameyang, Leno made a good save from a header, but then as we went into the final ten minutes Lacazette produced a moment of real quality to draw us level.

When the ball was played through to him by Iwobi, I thought he might have passed up the chance, but he took a touch, brought it back inside and curled a fantastic finish into the far corner. It reminded me a goal scored by Robert Pires some years ago against Sp*rs, and I can pay it no finer compliment than that.

We had a chance to win it, Bellerin’s left footed effort curling high and a bit wide, but all in all I think a draw was a fair result after what was a cracking game of football. What we wanted to see from Arsenal yesterday was an ability to go toe to toe with one of the best teams in the Premier League, and we certainly did that. Not only did we create moments of genuine attacking danger and quality, we again had to show real character and resilience to come from a goal down to get something from the game.

We wanted to win but the performance is good, we push and we work the match, doing our tactics and with our supporters pushing us with energy. For the supporters it is a great match and a good spectacle but I am only 50% happy because we wanted to win.

And afterwards on what the performance might mean to how his team is perceived:

I think the progress takes a long time. Against Manchester City, Chelsea and Liverpool, these were teams were all in front of us. I think in these three matches, today was the most complete performance.

I couldn’t argue with that, and as I said on the blog and the podcast this week, it was crucial that we got something from this game. I can’t understand criticism or cynicism of a winning run against teams you’re expected to beat. If you beat them, what’s the problem? However, I can fully understand the idea that to get a real measure of where we are and what progress is being made, games against the bigger sides give you far better insight into that and yesterday was a positive day overall.

We all know there are still things that need to be sorted out, but the midfield stood out for me as an area of strength. It’s early days, but Torreira + Xhaka looks like it has real balance, and without that partnership yesterday I don’t think we’d have got anything from this game. In the end, a decent point, and definitely a performance and a result we can build on.

Right, I think James and I will be doing the Arsecast Extra a bit later, so if you have questions you can send them to us on Twitter @gunnerblog and @arseblog with the hashtag #arsecastextra.

For now, me and the Mugsmasher require some bacon, probably between some pieces of bread. Catch you later.

Burnley 0-0 Arsenal: Another draw highlights the need for different personnel away from home