Arsenal blew Fulham away on Sunday, delivering the team’s most complete and most fluid performance under Unai Emery so far. A nine game winning run has included a couple of games where the Gunners rode their luck and got the rub of the green, but that can’t be said after the 5-1 win at Craven Cottage.

It’s interesting, then, that the win came with Aaron Ramsey, Mesut Ozil, and Pierre-Emerick Aubameyang all out of the starting line-up. The team looked quite different to what we’ve generally seen in the league this season, starting with Bernd Leno. The goalkeeper was in for his full Premier League debut. Rob Holding kept his place at the back, Henrikh Mkhitaryan and Alex Iwobi started out wide, and Danny Welbeck joined Alexandre Lacazette up front. It was on paper, a pretty standard 4-4-2.

However, the dual-midfield axis of Granit Xhaka and Lucas Torreira – who was terrific throughout – remained deep for the entire game, while Mkhitaryan and Iwobi roamed into central areas. With most of the width provided by the fullbacks moving forward, the formation was much more of a 4-2-2-2. 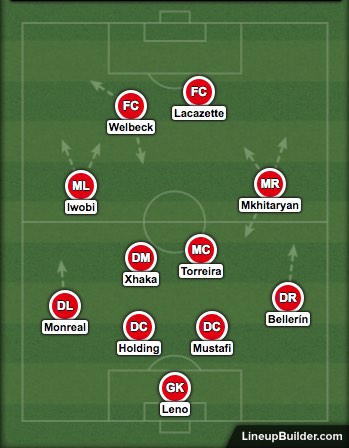 Some have argued that Emery has used this shape earlier this season but this was a much clearer process. At Cardiff, for instance, Ramsey and Ozil both played centrally with Aubameyang supporting Lacazette. However, Aubameyang started on the flank that day and moved from out to in. It was a 4-2-3-1 that morphed into a 4-2-2-2 as play developed. 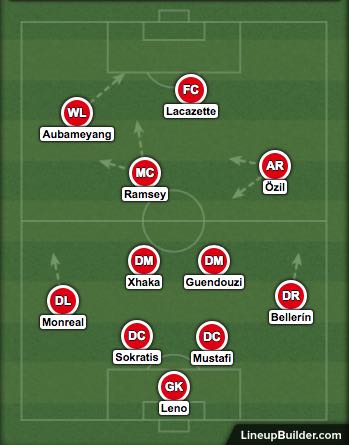 On Sunday, it was a 4-2-2-2 from the outset, with players in positions they are more suited to. Defensively little changed – Arsenal line up in a 4-4-2 shape anyway, with the ‘number 10’ joining the striker in the first line of pressing – so this article will focus on how it helped the team going forward.

Welbeck, always a willing runner, started centrally and moved outside (usually to the left) to stretch the Fulham defence and provide width. Lacazette frequently did the same on the opposite side. By using two out-and-out strikers centrally, Arsenal could drag the defence across the pitch, taking them into uncomfortable areas, creating spaces between them, and overloading on the flanks.

The difference is a crucial one and was aided helped by the omissions of both Ramsey and Ozil, who both want to play in central positions all the time.

“The problem we’ve had…is that in the front four of Aubameyang, Ozil, Ramsey and Lacazette, three of them are essentially being played out of position…I’m curious to see exactly what [Emery] does differently today – if anything at all.”

Believe it or not, the above line is taken from Sunday morning’s Arseblog. It proved pretty prescient. Emery played two strikers as strikers and used two natural wide players in place of Ozil and Ramsey. Safe to say it paid off. The roles Iwobi and Mkhitaryan were in suited them perfectly – both players are very good playing in the so-called half-spaces between the centre of the pitch and the channel. They excel at dribbling at space and finding the correct pass in those areas, especially when overlapped. It may well be the role Emery has wanted Ozil and Ramsey to play but they don’t have the same skillset – Iwobi and Mkhitaryan want to come inside to be involved but they also move outside. Arsenal looked far less predictable because of it.

From the very start it was clear the pair would play ahead of, not wide of, Xhaka and Torreira. Bellerin and Monreal hugged the touchlines to stretch play, while Mkhitaryan and Iwobi positioned themselves behind the Fulham defence. 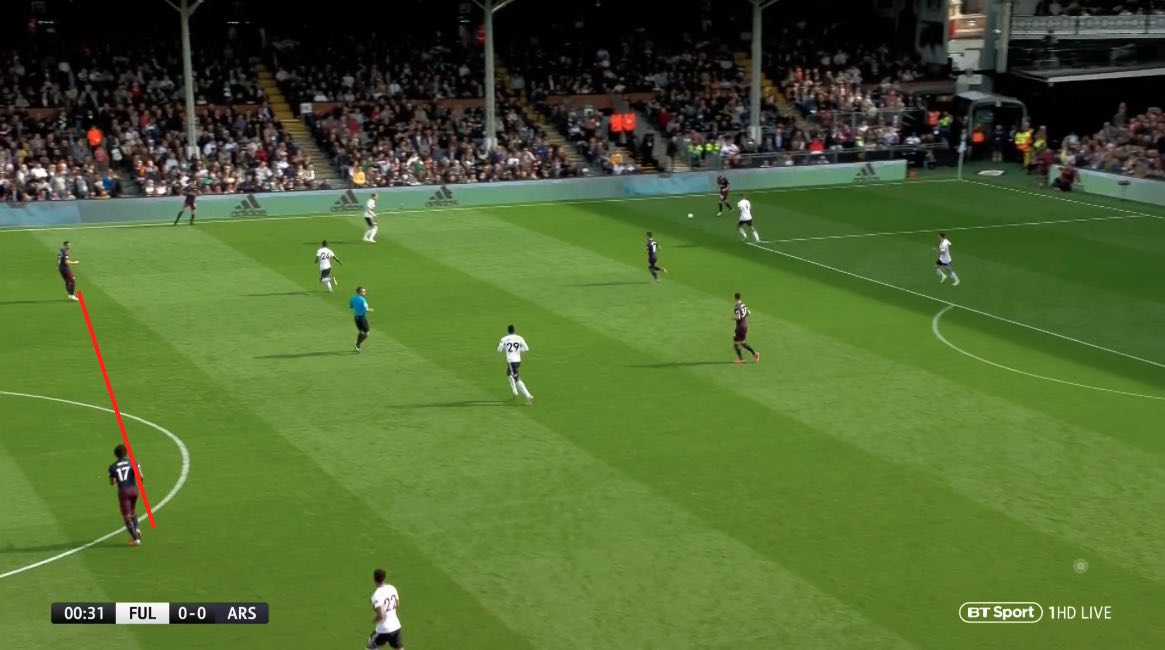 All involved were to key to helping Arsenal overcome a fairly aggressive press from the home side. Bellerin and Monreal provided and out ball and made sure the team used the full width of the pitch, while Xhaka sometimes dropped alongside the centre-backs.

Doing this, the Swiss helped Arsenal outnumber the press when they played the ball out. It also allows him to fizz balls upfield – providing much-needed verticality to the side – while ensuring Arsenal are covering the pitch should an attack break down. This compensates the risk of Monreal and Bellerin pushing so far upfield and has been a common theme of Arsenal’s build-up under Emery so far.

Often seen under Emery – Xhaka has the ball outside the centre-backs. Vs Fulham, that allowed Iwobi to receive centrally while Monreal held the width. Xhaka's deep positioning means Monreal can move high and Arsenal aren't exposed on the break. pic.twitter.com/oJtPr1QUyE

Playing against a back three/five, it was important for Arsenal to give the Fulham defence trouble in wide areas, where defenders could be isolated. Monreal’s high positioning helped achieve exactly that, while Iwobi’s narrow role meant Arsenal often easily outnumbered Fulham out wide.

The narrow positioning of Iwobi and the wide runs of Monreal brilliantly stretched and exposed the Fulham backline down that side. Arsenal overloaded and combined to great effect and scored the first goal by using this. pic.twitter.com/UNOdomOpzB

The attack above was even more dangerous thanks to Lacazette and Welbeck, who played between the outside centre-backs and the wing-backs, dragging the centre-backs out to the wings and helping Arsenal isolate players.

Such a move led to the opener, with Iwobi intelligently finding Monreal on the overlap.

Eventually, Fulham became more wary of Iwobi and Mkhitaryan’s positioning and tried to remain more compact when they couldn’t initially win the ball high up the pitch. When they dropped back, Arsenal had time on the ball and Iwobi and Mkhitaryan were often playing slightly inside In doing so, they couldn’t press high up the pitch as often and Arsenal had more time on the ball, with Xhaka continuing to form a quasi-back three to protect the Gunners against the break. 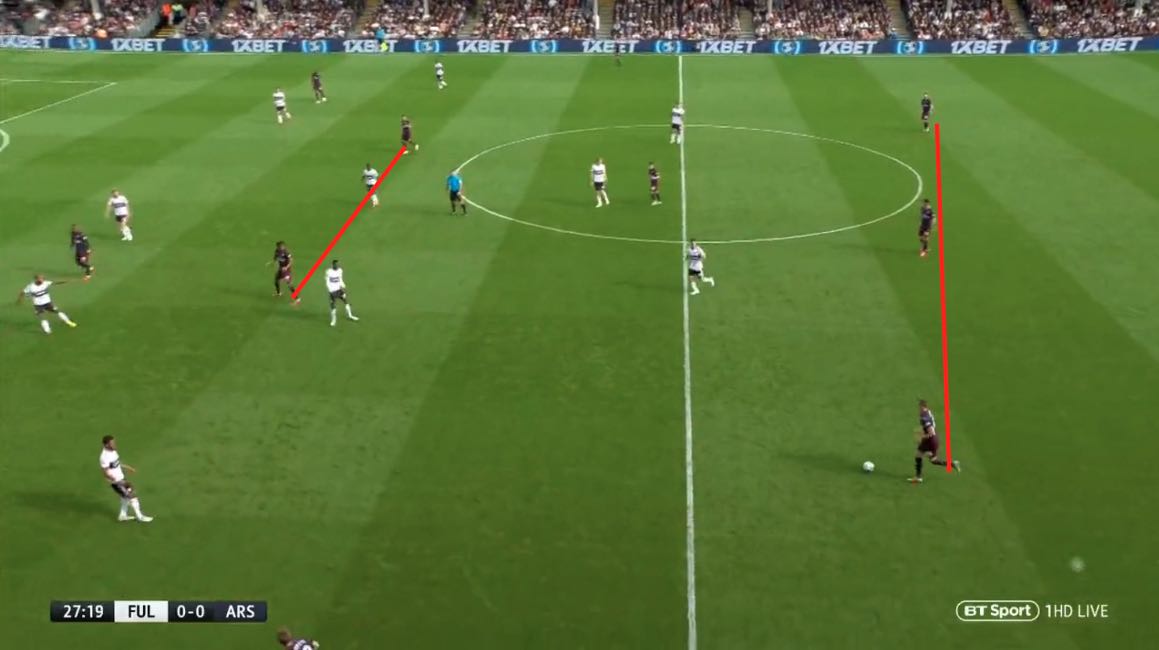 This use of ‘central wingers’ and the overlapping full-back led to the opener. The move started with Rob Holding playing a long pass forward. Iwobi and Mkhitaryan are so high up that Arsenal are essentially four against three, with all four players in dangerous central areas. Monreal does well to join the attack and Fulham simply have too many players to deal with so can’t effectively organise themselves. 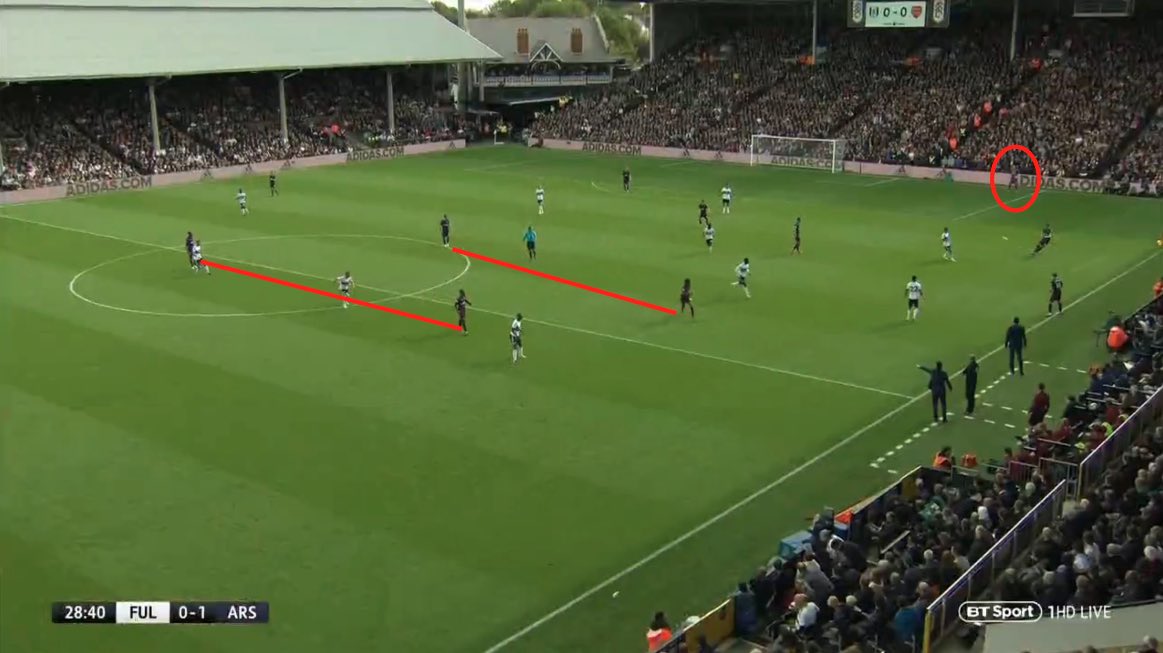 (As a quick aside, I’ve circled Leno here because I like how far wide he moved to offer Holding a simple pass back.)

We saw the same on the other wing at times too, with Mkhitaryan continuing his good relationship with Bellerin on the right. Here, Arsenal attract Fulham to the left. Mkhitaryan drifts inside to provide an easy connection between the two flanks, so Arsenal can shift the ball to the right where Bellerin and Lacazette are two-v-two. Mkhitaryan’s underlapping run is found and the defender recovers.

Arsenal did similar on the right, attracting Fulham to press on the left before switching with Mkhitaryan extremely narrow. Lacazette and Welbeck stuck wide to stretch the back three across the pitch and Bellerín provided the width for Mkhitaryan to underlap. pic.twitter.com/0mR448Qlb1

With Ozil on the pitch, this move isn’t as likely. He doesn’t move the ball to the right as frequently and looks to move inside, rather than from in to out. Promisingly, Ramsey was played on the right when he came on and instantly scored. The Welshman started the move on the flank but moved inside, similar to how Mkhitaryan moves.

That highlighted a way to potentially play this way with Ramsey and Ozil in the side – play them on their strong sides. If played on the left, Ozil will still drift inside but will also have the choice (and inclination) to drive outside of a defender. The same goes for Ramsey from the right. This way, like today, the players can play centrally when the ball is on the opposite flank and offer more variation when they’re in possession themselves.

Playing two up front makes sense with this squad. There is no longer an Olivier Giroud, all three of our strikers are dangerous and can move into wide areas. Sharing the width with two strikers, rather than one up front and one wide, makes the side less predictable and means a dual threat centrally, as well as making the team more dangerous on the break. We have good deep-sitting midfielders so can afford to play two together and leave the firepower to a front two and the fullbacks. We don’t have wide players but we do have players who work well just inside the pitch.

The win over Fulham was the first time we truly saw players used in their positions and it showed. Long may it continue.

Previous articleFulham 1-5 Arsenal: Five star Gunners take a step forward under Unai Emery
Next articleFulham focus should be on who was there, not who wasn’t