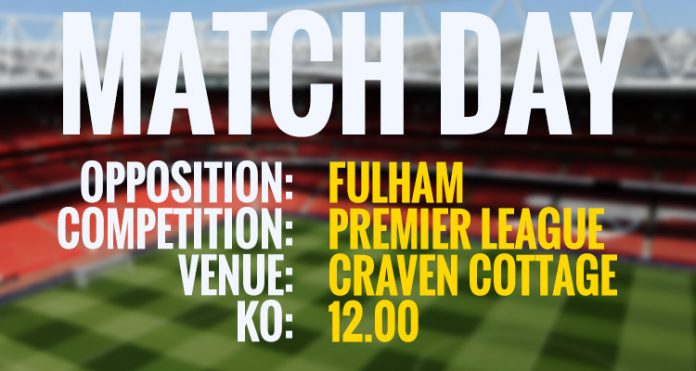 A very quick preview of today’s Premier League encounter with Fulham. Noon seems a very early time for a kick-off to me, so I can only assume it does for the players too.

Lots of them travelled to Azerbaijan during the week, although Unai Emery rotated his starting XI quite a bit, so if there’s fatigue it’s from travel, not playing time, and while the journey was long it wasn’t as if they went economy. Anyway, the boss made it clear after Thursday night that the schedule was not something he was prepared to use an excuse, saying:

For us it’s not a problem to play on Thursday and then on Sunday because we want to play a lot of matches and a lot of competitions. Fulham is a very big challenge for us, first because it’s away and second because each match in the Premier League is very, very difficult.

if I decide to play a someone for three matches in a week, they are available to do that.

Having used a back three in the first half against Qarabag, Emery reverted to a back four for the second half and I think he’ll stick with that from the off today. Bellerin and Monreal at full back, and while I would very much like to see Rob Holding alongside Sokratis at the centre of our defence, I suspect he’s going to recall the Teflon German, Shkodran Mustafi.

Xhaka and Torreira will make up the base of the midfield, and then we look at the front four. Pierre-Emerick Aubameyang is available again after missing the trip in midweek due to illness, while Aaron Ramsey is also up for selection. The question is: will he persist with this imbalanced attacking selection, or do something different?

I hope it’s the latter. Quite what he might do remains to be seen. Henrikh Mkhitaryan is fit and fresh having not played in midweek, the same with Ramsey, but the latter’s contractual situation might well be a factor unless there are some behind the scenes developments we’re not yet aware of. I also get the feeling Emery isn’t quite convinced by Mkhitaryan, but I guess we’ll see. Alex Iwobi has been playing well and away from home gives you a nice option, as well as the ability to move Mesut Ozil more central – a position which gets more out him than shunting him out on the right hand side.

The problem we’ve had, despite the fact we have been scoring goals, is that in that front four of Aubameyang, Ozil, Ramsey and Lacazette, three of them are essentially being played out of position. They’re good enough to cope with it generally speaking, but it’s fair to say it’s not getting the best out of any of them, while the one man who is playing in his natural position, Lacazette, is clearly enjoying it as his form shows. It’s a conundrum that Emery has to come to terms with at some point, so I’m curious to see exactly what he does differently today – if anything at all.

The home side come into this with two draws and two defeats in their last four games, but you underestimate any team in this league at your peril. Particularly when you’re as generous at the back as we’ve been so far this season. I’ve spoken before about how sooner or later someone is going to punish us, and that doesn’t mean it has to be a Man City or a Liverpool either. If we give presentable chances to Fulham today, they’re more than capable of taking them, so hopefully we’re a bit tighter at the back than we have been since Emery took over.

If we are we have enough attacking talent to get the goals we need to win the game, but after four successive home games, a midweek trip and a very early kick off, today is a challenge for the new boss. Hopefully he can make it nine wins a row, the three points would be obviously very useful in the chase for the top four, and going into the Interlull on the back of a win is always a good thing.

As ever we’ll have a live blog for you, just visit/bookmark this page and updates will begin automatically. We’ll have the match report, player ratings and all the rest over on Arseblog News afterwards too.

Now, dog walks, some breakfast, and then it’ll be time to go. Catch you later for the game.

Fulham preview: Goalkeeping clarity, but some thinking to do at centre-half