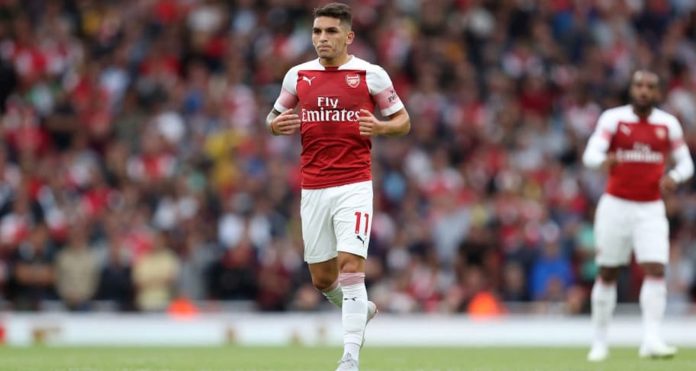 Morning all, a quick Saturday round-up for you after I slept it in a bit. I was dreaming I was having an argument with a man who wanted me to sell his guitars on the website, but the problem was his guitars were racist. I have no idea exactly how, but I knew they were and he was offended when I wouldn’t have any part of his business.

Anyway, onto matters Arsenal and Lucas Torreira has been talking ahead of our game against Crystal Palace tomorrow. The Uruguayan is fast becoming a real favourite among fans because of what he’s bringing to the team. Not only are there defensive qualities which we’ve been desperate for in our midfield, he’s a really good passer of the ball, his incisiveness perhaps coming from the fact that he wasn’t always a defensive player:

I arrived in Italy playing as a playmaker or an attacker. I was lucky to find a coach who put me in a more defensive position and I am totally happy in that role.

That’s evident in the way he looks for a forward pass if there’s one there, rather than other players in that position who feel once they’ve done their defensive duties their job is to give the ball to someone else who can do something with it (Coquelin to Cazorla, for example). The former Sampdoria man has much more to his game than that, and he clearly doesn’t consider his role a completely defensive one:

The most important thing for me is try to bring balance to the team, to help the defenders and support the midfielders. To try to help the attackers and to be constantly trying to help in ordering that. They are small things out there, but in the end they make a big difference.

He might have started life at Arsenal more slowly than people might have liked, but his growing influence suggests that Unai Emery was probably right to ease him into action. Let’s remember, he was coming back late from a World Cup, arriving in a new country, meeting new teammates, having to get to grips with a new language and all the rest, and the manager made a judgement call.

Would a 60% ready Torreira really have made any difference against Man City or Chelsea? Probably not. Whereas an 80% Torreira could come on and add something against teams not quite at that level, and a 100% Torreira starts to become really influential in every game and is a key part of how you want to your team to play. You could see it the other night against Sporting, we were fine and had played quite well in the second half, but once he came on we were better and he played a part in the goal that ultimately won us the game.

One of the things about Arsenal this season has been the willingness of the manager to change things around, to create a genuinely competitive environment for the players to work in, but there are always going to be players who are fixtures in your team because of how important they are. I know we’re only a few months into the new season, and there’s a danger of pinning too much Torreira, but given what we’ve seen from him thus far and what he brings to the team, he’s become one of them.

Meanwhile, Aaron Ramsey says he doesn’t know why the contract offer made to him was withdrawn when he thought everything had been agreed. Speaking after the Sporting game on Thursday night, when he captained the team, he was asked about it and said:

Hopefully somebody will come up and tell me why. I’ll accept that if there’s a reason. We all know that the contract was taken off the table. I’m not sure exactly why because a few weeks before we sort of agreed and I was ready to sign. Something happened, I am not sure exactly what, but that contract is no longer there, or nothing’s on the table.

He also said he hadn’t asked anyone what had happened, which strikes me as a bit strange. I’m pretty sure that if he really wanted to know he could find out – or at the very least have his agent find out. There must have been some communication from the club to tell the agent that the contract offer was being withdrawn. If, at that point, the agent didn’t ask why then it would suggest he didn’t particularly care – and if that’s the case then either Ramsey needs a new agent or this was a situation they were prepared for to some extent.

There’s a lot about this entire situation that smells off really, which is a bit of a shame. How much of the smell comes from the player’s side and how much from the club’s side is something people can debate, but it just feels like there’s a side of this story we’re not hearing and the side we are doesn’t ring entirely true. I’m a fan of Aaron Ramsey, a player who has always given his best and provided us with some hugely memorable moments, and I have no doubt that between now and May he’ll play with 100% commitment, but the more publicly this is played out the less it reflects well on all concerned.

Right, that’s enough for this morning. I’ll leave you with yesterday’s Arsecast chatting about the Sporting game as well as a good discussion with Rory Smith about football club ownership – and the episode referenced in this one about billionaire owners can be found here. Have a good Saturday, back tomorrow for the Palace preview and all the rest.