It’s another away day after a Europa League journey, but if there is a kindness to the fixture list in this regard it’s that we don’t have far to travel. Last time it was a London derby with Fulham, this time around it’s another London derby against Crystal Palace, and Arsenal will be looking to make it twelve wins from twelve at Selhurst Park today.

In terms of the team we don’t know yet if there’s an established left back fit enough to play. The hope is that leaving both Nacho Monreal and Sead Kolasinac at home during the week was precautionary and that that one of them at least, and preferably the former for me, is fit enough for today. Using Granit Xhaka as a left-back worked out ok in Lisbon, but I don’t think it’s an experiment that will stand up to more rigorous testing, so fingers crossed we have an option there today.

Assuming we do, Xhaka should go back into midfield with Lucas Torreira (about whom I wrote yesterday), and after his man of the match performance against Leicester on Monday Mesut Ozil ought to return to the 10 role, with Unai Emery hoping he can be equally as influential against Roy Hodgson’s side. The fact that Henrikh Mkhitaryan played the 90 minutes on Thursday night should mean he’s on the bench after starting as part of that front four on Monday, but he has been ineffectual of late and the bottom line is that someone has to make way for Pierre-Emerick Aubameyang.

With four goals in his last two Premier League games, he’s done everything you could ask in order to start again, and assuming Alex Iwobi and Alexandre Lacazette are the other two to make up our forward line, the only decision left for the boss is where exactly to position Aubameyang and Iwobi. The two tend to be deployed on the left hand side when we’re playing one up front, so it’ll be interesting to see exactly how we set up today.

The return of Petr Cech to full training also poses a little question for Emery. His replacement, Bernd Leno, the £22.5m signing from Bayer Leverkusen in the summer, has taken his opportunity very well and has done nothing to lose his place. Clearly the boss plumped for experience when deciding who would be his number one at the start of the season, but the injury he picked up has provided a natural passing of the baton from the veteran to the younger man.

As well as Cech has played this season – and I think he has despite a couple of moments with the ball at his feet that have been highlighted rather too often – I’d stick with Leno for this game and going forward. At some point we have to make the transition from a player whose contract runs out at the end of this season, and I don’t think it would send a positive message to the German if he were to find himself back on the bench today.

As ever, we’ll have a live blog for you so you can keep up with the game if Sunday is demanding other things of you, and all the post-match stuff on Arseblog News too. Not only that, James and I will be recording the podcast shortly afterwards, so we can probably get that up later on too.

Now, speaking of contracts running out at the end of the season, that’s a problem that Raul Sanllehi says the club are going to address. Speaking to Amy Lawrence – a piece you can read in today’s Observer – he addressed a key issue, and one which could cost the club tens of millions of pounds by the end of this season. As well as Cech (whose transfer value is minimal in fairness), both Aaron Ramsey and Danny Welbeck are in the same situation, and home-grown players who would have commanded substantial fees even last summer, and who have to be replaced, could leave for nothing. When you’re preaching a financial model of self-sustainability, that’s bad business however you want to dress it up.

I do believe that a player’s contract should never go to the last year, as a policy. But I don’t think I am inventing the wheel. Anybody could agree on that. Normally the contracts of the players are for five years. You need to have a clear idea of what you want to do with that player when he is in the third year, at the latest.

BAM! This might see us selling players we don’t necessarily want to lose, but selling them and using the money to reinvest in players is a much better way to run the football club than winging it to see if maybe we can convince them to sign but then losing them for nothing. The player leaves in both scenarios but your ability to replenish the squad is much reduced when you don’t get a fee. Tim cited the way Liverpool have done business in recent years in one of his recent columns, and I like that Sanllehi acknowledges this isn’t exactly rocket science (or brain surgery).

It’s also clear now what the main target for this season is: Champions League qualification. Whether that’s by finishing in the top four or winning the Europa League (ideally we’d do both) remains to be seen, but the former Barcelona Director of Football knows how important it is if we really want to make ourselves properly competitive again:

We need to regain that positioning, that privilege, to be seen as a Champions League club. From there the wheel starts rolling again. That is what is going to give us the speed, also to be attractive to better players, to generate more money. It is the virtuous circle.

As ever with Amy’s pieces, there’s a bit more colour to the message that Sanllehi and Venkatesham have been spreading over the last week or two. The Arsenal WhatsApp group with Stan and Josh is a perfect illustration of how the club and the world we live in has changed in a relatively short space of time, while Per Mertesacker’s inclusion in the executive team alongside the two men tasked with running the club is very interesting too. It’s still very early days but it speaks to joined up thinking and that ought to be a positive. 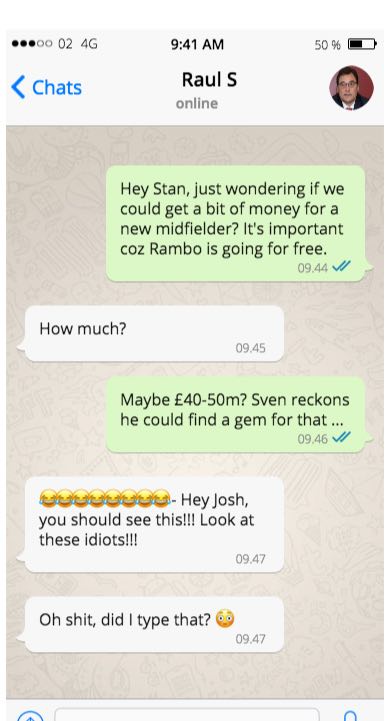 Right, have yourselves a good Sunday morning, catch you later on for the game and all the rest.