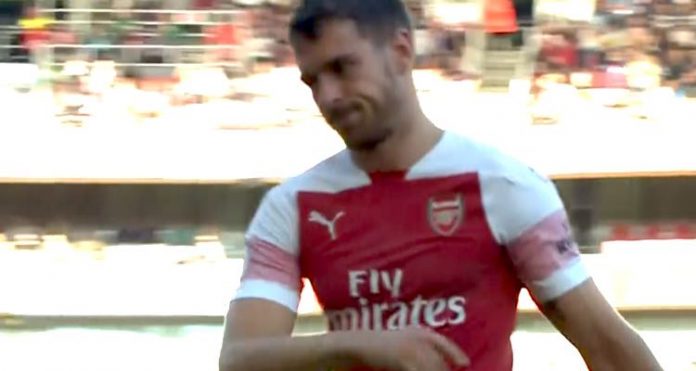 My morning routine has changed a little since we got the puppy. She’s an early riser, as you’ll have gathered from pre-dawn blogs this summer, so I tend to get up, make coffee then sit down with my laptop and do the blog – oh, and the most important part, she gets a little snack and then she goes back for a bit of a snooze while I work.

This morning she’s off to the vets for a little thing, nothing too serious, but she has to have anesthetic so she has to fast and therefore she can’t have her snack. German Shepherds like routine, so she can’t understand where the snack is. Or, more precisely, why it isn’t in her belly by now.

“Where is the snack? “When are you going to get the snack?” “Why aren’t you getting the snack now?” And so on. So please, the snack.

It feels like an act of singular betrayal, which will be compounded when I take her to the vet and leave her there. I will make up for it with extra snacks tomorrow.

In the world of Arsenal, there’s not a great deal going but we do have the Europa League this week. One man who won’t be making the trip to Baku is Henrikh Mkhitaryan who, because of political tensions between Azerbaijan and his home country Armenia, has decided against going. He has the full support of the club in this decision, but it’s still a bit mad that he’s had to forego doing his job because of this situation.

I won’t pretend to know very much at all about the conflict between the two countries, but there is reportedly a ban on Armenian citizens from entering Azerbaijan, although that was probably something that could have been overcome with UEFA backing any visa application made by Arsenal. The player obviously feels it’s not worth the hassle for a game we should be able to win without him, but looking much further ahead the final takes place in Baku also, so if we were to get that far this is a scenario we’ll have to deal with again.

The fact we’re playing on Thursday evening that far away and then face a noon kick-off on Sunday suggests to me that Unai Emery is going to have to use the full depth of this squad for this one. Key men for Sunday’s encounter will more than likely sit this one out, because even having them on the bench means hours of travel which will be tiring in itself.

So, I reckon we should leave the likes of Bellerin, Monreal, Xhaka, Torreira, Ozil, Lacazette and Aubameyang in London, and fill out the bench with some youth players. One man who ordinarily might have been in that group which didn’t travel is Aaron Ramsey, but because of what’s gone on with his contract and all the rest, may well take part in this one.

He looked less than impressed when he was hauled off in the second half against Watford on Sunday, but I wouldn’t put his reaction down to the fact he was substituted. That was part of it, I’m sure, as was giving up the captain’s armband he got to wear for about 15 minutes after Petr Cech’s departure, but he’s not a stupid guy and he must have known how peripheral he was in this game.

He must be aware of how this system doesn’t even come close to getting the best out of him, despite his two assists last week against Everton. He had just 26 touches of the ball on Saturday, only the two keepers (both 26), the 63rd minute sub Alex Iwobi (25), and Pierre-Emerick Aubameyang (26), had fewer, and he completed just 16 of 19 passes. He won 2/2 tackles but was dispossessed four times, and if there was frustration on his part his inability to influence the game in any meaningful way was surely a factor too.

The reality now though is that the news of the contract withdrawal and thus his likely departure – whether that’s in January or the summer (I think it’ll be the latter unless something extraordinary comes along in the transfer window) – unquestionably marginalises him in the eyes of Emery who has to consider the best way to build his team.

He spoke in pre-season about how important the Welshman was to his plans, and we can only assume that it was around this time that negotiations were ongoing and, perhaps, that reported agreement was found. His inclusion in the opening stages of the season where it’s felt like the new boss has kinda shoehorned both him and Ozil into the team goes some way to backing up what Emery said but now that the situation has taken such a sharp turn it must surely change the way the Spaniard is thinking.

The idea of leaving Ramsey out of the squad completely doesn’t make that much sense, there’s an element of cutting off your nose to spite your face because he is a very talented player and could still be very useful, but if you’re trying to build something fundamental, you don’t use someone as a building block if they’re going to leave the club in less than 10 months time. That might mean Ramsey as part of our Europa League team during the group stages, so we’ll have to see what Emery is thinking – and Thursday’s team selection will give us a better idea.

What I would say, and what I said on the Arsecast Extra this week, is that Ramsey – even if he has decided to move on – does not deserve the kind of abuse I’ve seen leveled at him this week. As ever it’s the dickhead fringe of social media who really aren’t representative of anything apart from other dickheads, but this is a man who has been with us 10 years, always given 100% even if he hasn’t been available 100% of the time, come back from a horrendous injury, and scored two FA Cup final winners for us. He’s never agitated, never kicked-up and is, perhaps, one of the least offensive characters ever to play for the club, so if he decides to leave having fulfilled the terms of his contract, then he deserves a big thank you and plenty of respect. Not digital wankery from bollock-thumbed shit-trowels on Facebook and Twitter. And probably Instragram too, the dickheads.

Right, I guess it’s time for the vet. My heart. Catch you tomorrow for more, and we’ll have news throughout the day on Arseblog News.