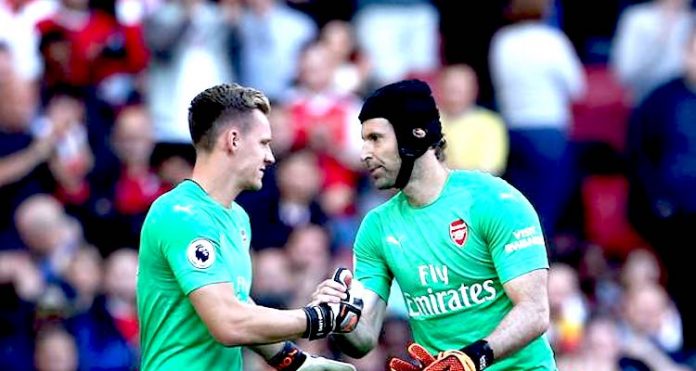 Injury updates. I like the new style that the medical team provide the official site. We got an update on Petr Cech yesterday after his issue in the Watford game. It read:

A bit more prosaic but the nuts and bolts of it are the same. He’ll be out of action for four weeks, which provides Bernd Leno a real chance. More on that anon, but I just wanted to highlight that moment again during the game on Saturday when Tony Gale, the world’s most irritating co-commentator, insisted that this injury came about because Unai Emery is asking him to pass the ball a bit more often. I mean, really. How does any player ever get through any game if that’s the case?

It’s hard work listening to him. If you gave me the choice of listening to Tony Gale, or have a giant wasp sitting beside who had the voice of Gilbert Gottfried and kept talking really loudly while listening to music turned up too loud on the speaker of his mobile phone so it’s all distorted while eating a gigantic tube of Green Pringles – the most horrendous smell in all the universe – I’d choose the wasp every single time.

I was also going to mention that Gabriel did pretty well for Valencia versus Manchester United, and then say that if you gave me the choice between Shkodran Mustafi, the Tony Gale of defenders, and a wasp who blah blah blah etc, I’d choose Gabriel but then I realised I hadn’t thought it out properly at all. He did do well though, and the Mourinho based hilarity continues. I see they’ve got Newcastle at home at the weekend, what larks it would be for Rafa Benitez to get his first win of the season at Old Trafford.

I mean, Newcastle are in a right mess, Laura Ashley’s dad is a terrible owner, and I suggest if you gave Benitez and the fans the choice between him and a wasp who blah blah etc etc, they’d literally choose a vagrant Sunderland fan who lives under a bridge and hasn’t got thruppence ha’apenny to his name and whose first decision would be to rename them the Zany Zebras.

Anyway, I have digressed. The point I was initially making is that Cech has – at a rather unfortunate time because he’s been playing very well and has won us points with his saves – picked up an injury which will give our most expensive goalkeeper ever an opportunity to stake his claim. He’s had to be patient since his £22.5 move from Bayer Leverkusen, something he touched on over the weekend, saying:

It’s difficult to sit on the bench but the coach said to me ‘Don’t be disappointed or sad, just train hard’. He has worked with many goalkeepers and the goalkeeper is a very special position. It needs a little bit more time for your personality and confidence and feeling with the defence.

I was calm and worked very hard every day.

How often have we seen a situation like this where a door is opened and a player takes the chance to establish themselves in the first team? If this is that moment for Leno, I hope he takes it and proves himself worthy of being our number one keeper for years to come. It would a bit sad for Cech, but at 36 and with less than 12 months left on his contract, it’s not as if he’s the future, however much I like him.

However, I do think the German has a bit to prove. I was impressed with his 45 minutes against Watford, bar one moment where he came to punch and didn’t get there, and the save he made against Troy Deeney early in the second period really was top class. Obviously though, we need to see more before we can make any real assessment of how good he is, and at the back of my mind there’s part of me that wonders if he can make it to the same bracket as Cech, who has been a great player in the Premier League, or if he’ll be a bit more Karius or Mignolet.

It might just be he reminds me of them physically that’s causing this doubt, but hopefully over the next few weeks he can illustrate why exactly it was that Sven Mislintat targetted him because it was the Head of Recruitment who championed him, and this was a deal that was more or less in the can well before Unai Emery was even considered for the job of replacing Arsene Wenger.

As I wrote yesterday, I wouldn’t play him against Qarabag on Thursday, that’s a job for Emi Martinez, but with games coming up against Fulham, Leicester, Crystal Palace and Liverpool before Cech returns, he has a great chance to make the position his own. Just on that though, I’d also be really into the kind of performances which leave our goalkeeper a lot less busy, but maybe that’s something we can touch on another day.

Finally for now, I just want to point you in the direction of another fantastic interview by Hector Bellerin who has once more highlighted the fact he’s a most excellent dude and someone I believe is a real credit to the club. His interest in fashion and his hair have absolutely no bearing on his performances, despite some people’s belief they are inextricably linked, and his willingness to put his head above the parapet and talk about things that footballers rarely talk about is to be admired.

And for the ‘He should concentrate on his football’ crowd, as if he doesn’t already, I think he’s enjoying life under Unai Emery and his performances have reflected that so far. It’s just worth remembering that footballers are actual people, not entertainment machines who struggle with multi-tasking and malfunction when they have a thought that’s not about football. Bravo, Hector.

ps – puppy update: She came back last night feeling very sorry for herself and a bit poorly, but seems much better this morning, particularly after she had her snack!