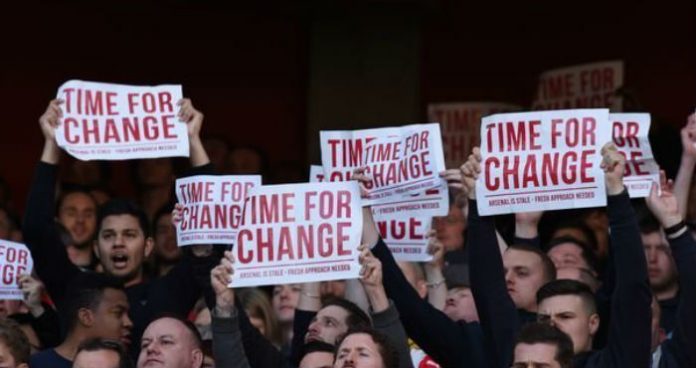 The last time I wrote on these pages, Atletico Madrid had just dumped Arsenal out of the Europa League and we were all coming to terms with the fact that Arsene Wenger wasn’t going to get the happy ending we’d all wished for him.

Just over four months have passed since then…and, well…not much has happened, has it?

*hang on, let me pause for breath*

…put Matteo Guendouzi in our fantasy football team, chuckled at the first team having to work their bollocks off in training, watched Mesut – scapegoated for Germany’s failings in Russia – become the focal point of a complex debate on national identity and then retire from international football, read rumours of AC Milan pinching our CEO, appointed a host of captains, lamented Silent Stan’s full takeover and the death of plurality of ownership, lost to City and Chelsea, torn our hair out over Petr Cech’s wayward footwork, persuaded ourselves to be patient with the ‘process’, driven Joel to Italy, waved Dave to Naples, bounced back against West Ham, beaten Livia Soprano’s Cardiff, laughed at Mourinho and checked where Poltava is on the map.

*Cough* Someone please Photoshop this.

Yep, a hell of a lot has happened. And yet opponents still score by lobbing long balls into our penalty box. And mid-season Interlulls remain boring as fuck. Perhaps, for once, I shouldn’t complain about the latter. It really is the calm after the storm right now.

On that note, aside from an Aaron Ramsey goal for Wales against Ireland and a Mkhitaryan penalty miss for Armenia against Luxembourg, the only story of real interest in the last 24 hours has been Nacho Monreal wading into the Ozil saga to say the German’s detractors fabricated the story that he’d fallen out with Unai Emery.

“He is a very famous player and obviously people love talking about him. Recently, it is always bad things. Like last time, he was sick and that’s why he didn’t play.

“People started to invent that he had a problem with the manager. It wasn’t like that. He got a cold, he was sick, that’s it. That’s why he didn’t play.”

At this point, whether it happened or not, isn’t really the issue, the key is that our new head coach and our star player work together to get the best out of Mesut for the benefit of the team.

“The important thing is he plays at his highest level, gives a lot of assists, scores a lot of goals and basically helps the team. That’s what he knows. He doesn’t know how to go up to a player and grab him by the throat.”

As Michael Cox writes in a very interesting piece for ESPN, that’s going to be easier said than done; he’s had an up and down five years so far at the Emirates.

Just before I go, if you’ve not checked out Tim Stillman’s column on Petr Cech, you must. And Blogs has kindly left his excellent interview with Gunners legend Liam Brady for you to get your weekly Arsecast fix. The chat was originally made available to our Patreon members and covers all sorts, including his career at Highbury, his move to Juventus and what he thinks of young English players moving abroad.

On the subject of Arsenal Legends, there are still tickets to watch a whole host of them, including Bobby Pires, Gilberto, Super Tom Rosicky, take on their Real Madrid counterparts at the Emirates on Saturday. It should be a fun afternoon. Ticket details here.

Right, that’s your lot. Tom is on duty tomorrow and I’ll be back on Sunday when I shall endeavour to pen a post that isn’t just a big long list of things. I think I’m capable of that, but it’s a rather daunting prospect.