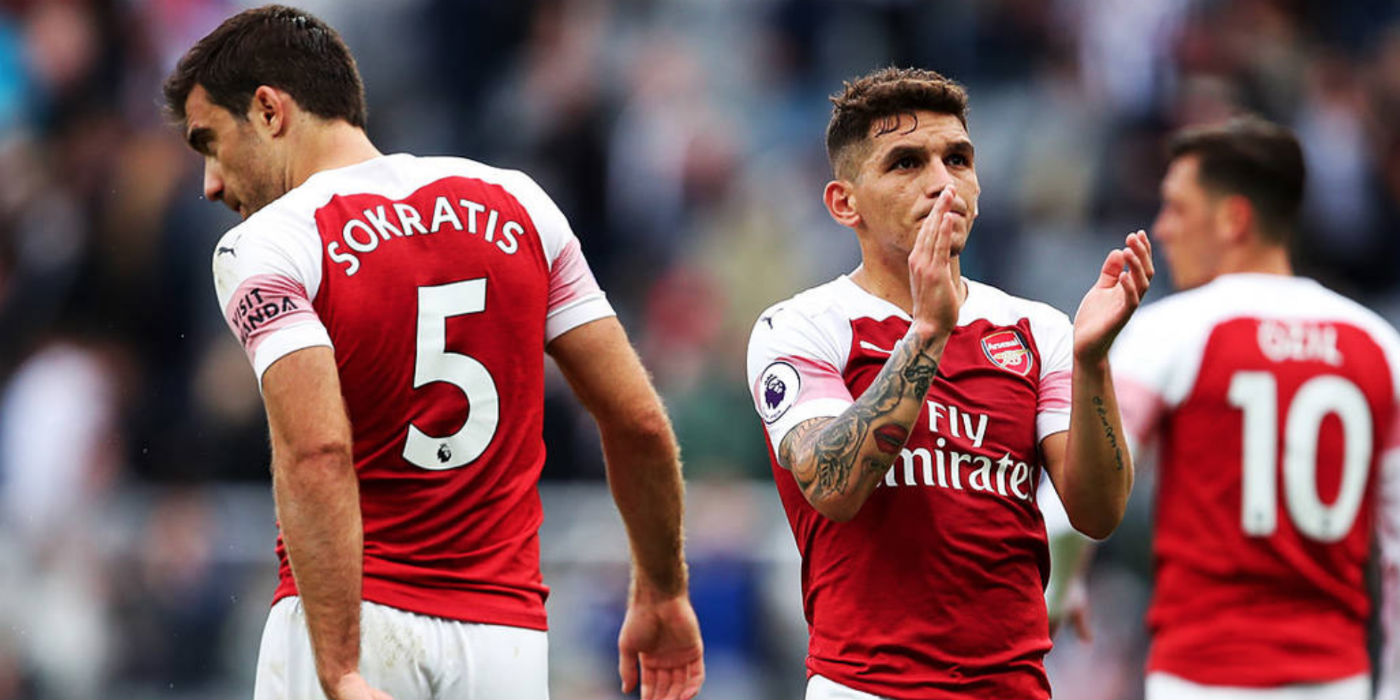 By half-time of yesterday’s match, it’s fair to say I was not impressed.

My frustration boiled down to a huge disparity between what the coach and players tell everyone we’re trying to do and what we’d actually done.

Where was the pressing of our opponents? Where was the quick-tempo football? Why weren’t we playing through the lines? What kind of an attempt to build play from the back repeatedly ends with a hopeless long ball? Why Mustafi? Why? Why? Why?

We were unimaginative, laboured, meek and dopey in equal measure.

Thankfully, despite trying to copy Cardiff’s tactics, Newcastle – a very limited team – failed in their attempts to break the deadlock with an aerial bombardment. In fact, by the break, neither team had registered a shot on target. It was turgid stuff and quite difficult to watch.

Unai Emery had plumped for the same starting XI that won in the Welsh capital, which meant that once again Matteo Guendouzi partnered Granit Xhaka at the base of our midfield. I wouldn’t go so far as to say it was a controversial decision, but Lucas Torreira must have been scratching his head. Since signing for £26.5 million, he’s not started a game and that’s despite a series of tidy cameos and an assist last time out.

If the little Uruguayan was miffed, he certainly channelled his annoyance well. His introduction at half time (credit to Emery for that) changed the game for the Gunners.

At this point, I should point out that Matteo Guendouzi, whom he replaced, had done little wrong in his 45 minutes. In fact, he’d come closest to scoring with a cross-cum-shot that zipped over the bar and had completed 39 of the 40 passes he attempted.

Anyway, back to Torreira. Inside four minutes he fizzed a pass to Aubameyang who was immediately taken out from behind about 25-yards from goal. It seems strange to think that an innocuous forward-minded pass could recalibrate the mentality of the whole side, but it seemed to do the trick.

Obviously, it helped that Xhaka curled the resulting free-kick over the wall and into the top corner. For once, the Swiss didn’t try and leather the ball, his connection with side-foot technique was controlled and it produced that awesome up and down swerve that makes it look like the ball is accelerating. Dubravka in the Newcastle goal had no chance.

“I think the key is the first goal. This goal gave us the confidence to continue to improve in the match. We finished the match with the result.”

Within nine minutes Mesut Ozil had doubled the advantage. Very early in the build-up to the goal, the commentator on my stream greeted a pass by Torreira with the words; ‘I don’t think he’s put a foot wrong since coming on.’ I don’t know about you, but I was certainly thinking the same.

His touch moved the ball to Ramsey who played triangles with Aubameyang and Monreal before making space for Xhaka to play a give-and-go with the left-back that released him behind the Magpies defence. The Swiss looked up and arrowed a pull-back to Lacazette who was unlucky to have his shot blocked at close quarters. The rebound fell to Ozil who nonchalantly opened his body and tucked the ball home first time. Not a bad way to mark your 200th appearance in an Arsenal shirt.

The German, our tenth different scorer of the season already, was understandably chuffed and later took the opportunity to make clear he’s enjoying the new coaching set-up, no matter what the doubters might say.

“I am very happy to play for Arsenal and especially for the new coach. He knows what he wants and the team accepts that, we have a good relationship. We score and we are happy, even the players that don’t play, we are all team.”

Aubameyang had a chance to kill the game within a minute but he dragged his effort wide following some brilliantly tenacious attacking play by Lacazette, who’d taken down a long ball by Xhaka and hustled it to his strike partner. Pierre never really got going all afternoon and was replaced by Mkhitaryan with 20 minutes remaining.

After that we controlled things nicely. We weren’t exactly Pep-era Barcelona, but compared to the first half we at least looked alert and eager to play football. Newcastle, their crowd quietened, seemed to run out of steam and with the game stretched, chances came and went for Torreira and Mkhitaryan.

Of course, Arsenal being Arsenal, we let Rafael Benitez’s side back into things in the dying moments. There was a warning on 85 minutes when Cech tipped over Joselu’s header; the Geordies’ first effort on target. Annoyingly, we didn’t learn our lesson and when another cross from the right was whipped to the back post just into stoppage time, Ciaran Clark, unmarked, reduced the deficit with his head from six-yards out.

The wait for a clean sheet goes on. I can’t tell whether we’re choosing not to close down the crossing of opponents out of choice or if something is seriously awry with the pressing of our full-backs and wide players. I’m leaning towards the latter.

Thankfully, unlike in 2011, there was no time for a miraculous Newcastle equaliser. The points were ours and so too a third win on the bounce. Not that these things mean much at this point, but we’ve climbed level with Sp*rs to the heady heights of seventh.

Just returning to Torreira, quickly. Looking at the Stats Zone app, he made fewer passes, interceptions and ball recoveries than Guendouzi and he won fewer tackles than the Frenchman. His pass completion rate (74% vs 97%) was also considerably worse. And yet, despite all that, I suspect most people who watched the game will agree that Torreira made more of an impact for us.

It was all about balance, according to Emery, who said after:

“I want to give every player confidence. I am very happy with Matteo and also very happy with Lucas. Maybe in the second half, we needed a little more balance on the pitch with the positioning. Lucas gives us this balance.”

When we face Everton in the Premier League next Sunday, I’d love to see Torreira start, but it’s hard second-guessing Emery’s selection policy especially with other competitions kicking-off.

On Friday, he suggested he’d limit squad rotation for the Europa League and in yesterday’s post-match conference he said, “We’re going to change and use a lot of players for different competitions.”

Make of that what you will.

We now have four home games on the bounce, Vorskla on Thursday, the aforementioned showdown with Everton, Brentford in the Carabao Cup and then Watford. I’m getting used to this winning thing. So here’s to a few more in September.

Just a quickie, to congratulate Reiss Nelson on his debut goal for Hoffenheim. The 18-year-old, who is there on loan for the season, came off the bench to score with his first shot in the Bundesliga. Unfortunately, his team still lost, but nice work all the same.

OK, I’m signing off. Blogs returns from Spain today and will be back on duty tomorrow. Thanks for reading over the last week or so. Until next time.