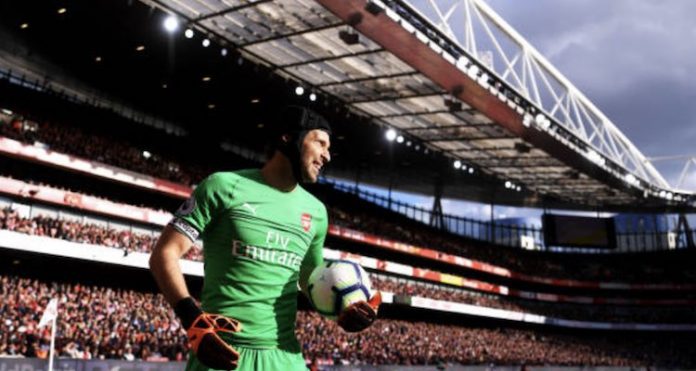 In some ways it’s fitting that on the day we kept our first clean of the season, our goalkeeper was the man of the match. Petr Cech’s performance was fantastic, the captain made saves, dominated his area, and used all his experience to ensure that Everton were never able to find the breakthrough – but the worry is quite how many chances they had to do that.

The first half in particular saw the visitors cause us plenty of defensive problems, and our tendency – can we now call it a habit? – to start games slowly was a significant factor in this. Despite a very welcome first start for Lucas Torreira, we were on the back foot almost immediately and only for some indecision from Calvert-Lewin, and Cech’s first intervention of the day, we could have been behind inside two minutes.

We don’t help ourselves by putting ourselves under needless pressure, Xhaka being caught in possession just outside our box ensured the jitters continued, and we struggled to build any kind of momentum. We conceded countless free kicks, Mustafi’s inevitable brain-fart saw him lose the ball and force Sokratis into making a foul on Theo Walcott which gave them a dangerous free kick just outside the box, while the Greek defender picked up a yellow card and a knee injury in the process which saw him replaced by Rob Holding.

The former Arsenal man had Everton’s best chance of the game late in the half when he got clean through and into a position from which we’ve seen him score plenty of goals for us in the past, but once again Cech was quick, decisive and saved well with his feet. All we had to offer at the other end was an Aubameyang cross which accidentally hit the bar, and a moment when Ramsey set up Lacazette but the striker took a touch and was dispossessed.

While the second half was obviously better in the end, again it was Everton who looked sharper and hungrier in the opening stages, although not quite as dangerous. We did start to crank things up a bit though, and had we not scored our first goal so soon after Jon Moss waved away appeals for what I thought was a pretty nailed on penalty, we might have been discussing that as a more contentious decision this morning.

Interestingly, with Alex Iwobi stripped and ready to come on, it was Lacazette who was about to make way, but then Torreira kept the ball alive in midfield, Ramsey fed the French international in the box, and without even looking up he smashed an unbelievable shot across the goal and in off the post. As we all know, a goal that goes in off the post is immediately about 22.65% better, but it was a superb finish and a moment of individual quality that we really, really needed.

Three minutes later it was 2-0, Lacazette broke down the right, fed Ozil who played it to  Ramsey for what would have been a tap-in but as he moved towards the ball he slipped. I think if this were any other player in our team the chance would have gone, but the Welshman is capable of moments of wonderful improvisation and he somehow got his feet right to flick the ball to Aubameyang who made it 2-0. Make no mistake, it was deliberate from Ramsey who ended the game with two assists.

Now, Aubameyang was about as offside as offside can be, I have no idea how a professional official couldn’t see it, and while I will definitely complain if and when this happens to us, I won’t complain about this. If I recall correctly, his first Arsenal goal was against Everton and he was also offside then. What larks.

Iwobi came on for the the Gabon striker then, and what was perhaps most pleasing about the performance yesterday was how well we controlled the game at 2-0 up. We didn’t do anything stupid, we didn’t let them back into it, we didn’t allow them to build any kind of momentum or make any kind of comeback, and without doing too much ourselves we ground the game down to the final stages. They had a few moments in the last five minutes or so, but beyond that I thought we dealt with the situation professionally and, considering we’re a team who so often shoots itself in the foot, it was good to see us keep our weapon’s holstered and not inflict any damage on ourselves.

When they did raise questions, the man to answer them was Petr Cech who saved, caught, and punched every ball that came his way, and while he’s had a couple of iffy moments with his feet this season, his goalkeeping has been very, very good so it was pleasing to see us come away with that long-awaited clean sheet. His performance more than merited it, and helped us to our fourth consecutive Premier League win. We’re now on 12 points, in sixth place in the table, and it all looks a bit rosier than it did after those difficult opening games of the season.

Which isn’t to say that everything is hunky-dory because it’s impossible not to have some questions and concerns about the way we’re playing. The balance of that front four – Ozil, Ramsey, Lacazette and Aubameyang – doesn’t look right at all. I don’t think playing Auba out left is ideal, but on a day when both our £50m strikers scored it’s perhaps a bit churlish to complain about his particular role. However, he doesn’t look fully comfortable out there.

Then there’s the Ramsey/Ozil issue. The Welshman wasn’t great but set up both goals and created our most dangerous moment of the first half. The German was level with Monreal as the team’s most successful tackler yesterday (4), but while I hate to read too much into body language I watch him and can’t help but feel something’s really not right with him.

The system we’re playing leaves him far less involved that he’s used to. He’s someone who has generally been one of most influential players when it comes to passes, touches of the ball etc, and now he’s miles down the list when it comes to those things. I don’t think it’s indifference on his part, more the role he’s being asked to play, and it raises questions. If you have a playmaker who is unable to make play, for want of a better expression, do you need to find a different way to use him or a different player to play in that position?

You can easily understand why Emery would want the individual quality of both Ramsey and Ozil in his team, but is it coming at the detriment of the football we’d like to see us play? That said, it’s one of those ‘good problems’ a manager has to face, and over time we’ll see if he can make it work. If not, he’s got a difficult decision to make, but from what we’ve seen so far Emery appears willing to make those when they’re presented to him.

So, plenty to get the discussion going, and for more on yesterday’s game, discussion of the performance, our issues with balance and loads more, check out the brand new Arsecast Extra below. We’ll have all the day’s stories over on Arseblog News. Till tomorrow.