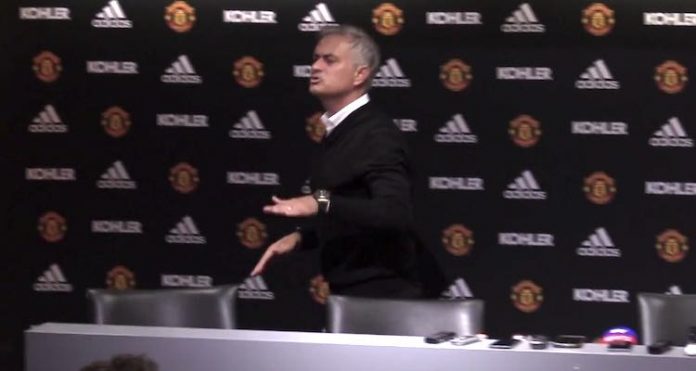 Good morning everyone. The first thing I’d like to say is that I do not enjoy seeing Sp*rs win at all. I don’t know any Arsenal fan who would. However, I think it’s important to make the distinction between them winning and the consequences of them winning. They are two very different things.

Last night, after they beat Man Utd 3-0 at Old Trafford, the consequence of that was some first class bollockery from Jose Mourinho. To be fair, that started before the game when he left Anthony Martial out of the squad, Alexis on the bench, and played Ander Herrera at centre-half, but nevertheless, those decisions will be forgotten in the wake of his reaction to defeat.

There was this quote to Sky:

It’s like Alan Partridge crossed with David Brent infused with the essence of Brendan Rodgers. Then there were comments about how United fans were too clever to pay attention to the media:

Hmmm, seems a bit familiar that. Castigating the media as if somehow they are the enemy of the football club or trying to get one over on the common fan. Where have we heard that kind of shit before? Which isn’t to say sections of the football press aren’t grotty and reprehensible, but this isn’t about that. His clapping of the fans afterwards and what he had to say in his post-game press conference was as transparent as transparent can be.

It’s clear that he’s at odds with the United executives, in particular that fella Ed Woodward who has a head like someone brought a Maris Piper to life, and with his complaints about not being backed in the transfer market we have a very unhappy situation at United for him. And it’s hilarious.

Especially his post-game press conference, which you can see here, and if you can’t be arsed watching all 7 minutes or so, the last couple of minutes are a must as he reminds journalists he’s won more Premierships than all the other 19 managers combined and then walks out saying, “Respect, respect, respect man.”

I know we have our own issues at Arsenal right now, but seeing yet another third season meltdown from Mourinho is a wonderful thing that all football fans should enjoy. He’s spent half a billion pounds or more, his team looks like a bag of crap – especially at the back, and it now looks as if he’s doing everything he can get to fired and get paid off having just signed a massive new contract recently.

Classic Mourinho. And the best thing about it is the predictability of it. United had all the information in the world about him when they appointed him first and before the gave him a new deal, so the chief executive with a bonce like a badly washed potato might well find himself in the shit too. What larks, Pip!

Meanwhile, in some quarters the Unai Emery – Mesut Ozil thing rumbles on. On Sport Witness they have a story in which the Arsenal boss speaks to the EPSN journalist who Tweeted the information that there’d been a bust-up and that the German had refused to play after being told he’d be on the bench.

‘Totally lies’, is what the Spaniard said, and whether it’s true or not, it’s what you’d expect any manager to say in this situation. During the Arsene Wenger era there were countless incidents that never made the papers and the ones that did were pretty much always played down or covered up to some extent by the Frenchman in order to maintain the sanctity of the dressing room or the training ground.

I think that unless there has been behaviour so out of line that there’s no alternative but to address it, it’s best to ensure that the dirty laundry isn’t aired publicly. So on one hand we have a journalist saying something happened – and from what I understand this isn’t a guy prone to stirring shit just for the clicks and social media attention – and on the other the head coach as representative of the club, insisting all is fine.

It’s something we discuss at length on this week’s Arsecast Extra but with so little information and two positions we have being so diametrically opposed, all we can do is speculate. I think attempts in the press to conflate this with the Neymar situation that Emery had to deal with at PSG are verging on ludicrous. There’s just no comparison between them. The Brazilian had a direct line to the owners, his transfer fee and his status as the Kingpin of Paris ensured he was not accountable to the manager, which was a terrible position for Emery to be in.

Who is still at PSG? That tells you everything you’ll need to know. It’s different at Arsenal. Ozil may be the star player, but he can’t go running to Uncle Stan if he doesn’t like the tactics or if he’s not allowed take the penalties. Emery has the right to make the decisions he feels are best for the team, and those will be made regardless of anyone’s wages, reputation, social media following or anything else. Which, of course, is the way it should be at any normal football club.

So, the information we have to hand may be scant, but the next few weeks will tell us plenty about how it’s going for Ozil, for Emery, and between the two. Let it play out, and then we can properly assess it. My hope is that we can find a way to get something approaching Ozil’s best out of him, because the bottom line for me is that he’s a very talented, extremely creative player who can help us score goals, and if we’re going to have any chance of reaching the top four then he could play a big part in that.

Right, I’ll leave you with yesterday’s podcast which covers Ozil, Hector Bellerin and why people need to lay off him a bit, our defensive issues, the West Ham win and loads more. Listen and subscribe below, more from me tomorrow.