I first encountered Mark and Andy back in 2012. As a devoted fan and sometime blogger, I have long been interested in the history of Arsenal Football Club. I was writing for an Arsenal fan site at the time and had begun to pen some articles on the club’s early days. These pieces were unpaid, so I did not have the time or the resource to carry out especially extensive research. In fact, I did not think it was especially necessary.

Armed with copies of Bob Wall’s memoirs, some Brian Glanville books and Phil Soar and Martin Tyler’s tome on the Gunners history, I largely regurgitated tales that have passed into Arsenal folklore via these documents. I didn’t much question what I had read. Andy and Mark are, as you will see over the course of this book, somewhat more inquisitive when it comes to the history of one of England’s most storied football clubs.

I use the word storied quite deliberately. Andy and Mark challenged some of the half-truths and Chinese whisper style retellings in my articles. Truth be told, I was a little perturbed by their comments at the time. Nobody really enjoys their work being criticised, no matter how constructively. The majority of us learn to train our impulses a little when receiving criticism, but however silently, one’s defences are constructed quickly.

Did it really matter if the odd tall tale slipped through? And besides, who gave these guys the authority to question the likes of Bob Wall and Brian Glanville? The mistake I made was believing that historical record is somehow overseen and constructed by people that know what they are doing. I had always assumed that some unnamed persons were in full control of the accounts that govern their history.

If it’s out there, it has probably all been ratified and checked over by the historical overlords, so it’s probably at least close to the truth. I subsequently began to follow Mark and Andy’s work online and gradually I became aware of the errors in my thinking. History, like language, is not governed by a supreme council, it evolves organically through word of mouth, if you will. There is no body of learned linguists that oversee the evolution of communication and there isn’t for our history either.

In the case of Arsenal, there is no canon law- if you will excuse the pun. In following Mark and Andy’s work, I came to realise that historical register is quite an anarchic process. Gossip and inaccuracies creep through the cracks and bleed into subsequent generations, purely on the whim of individuals who have misreported or misremembered. People like Andy and Mark are very necessary to accurately document historical events.

In the absence of regulation, historians such as Mark and Andy are invaluable guardians, whether appointed or otherwise. Once I came to understand the entirely undemocratic construction of the history of Arsenal Football Club, I became emphatically persuaded by Mark and Andy’s work- its quality, its rigour and most of all, its importance.

Now I flush crimson when I recall some of the articles I wrote relaying old inaccuracies. Now I have seen the light- the error of my ways- I wonder how I could have been so naïve. Working with them on this book has felt like a kind of redemption for those errors, a repentance of past sins. Through reading their work I have come to realise that Mark and Andy know and have discovered crucial information about the club’s origins that the club itself did not even know.

Over the course of these pages, you will discover information that, as of right now, as I write this passage, Arsenal Football Club itself is unaware of. The precise coordinates of Royal Arsenal’s first ever match are contained in this book, information that went to the grave with the participators of that fateful match in December 1886. 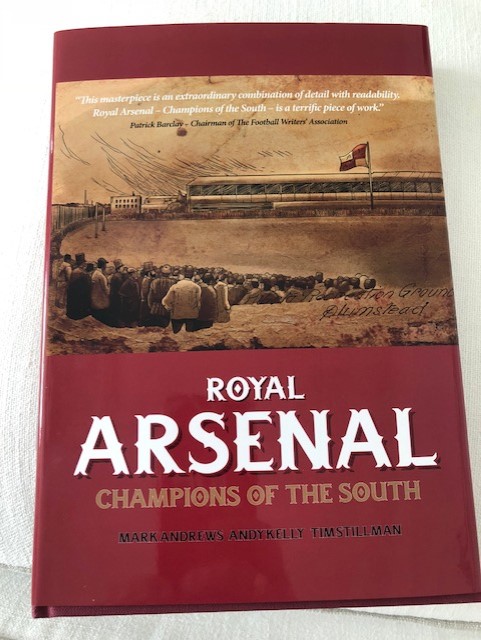 Mark and Andy literally know Arsenal Football Club better than it knows itself. It has been a privilege to handle that information. To have this secret that has persisted for about a century ensconced in my laptop has felt like an honour. And I guess that means I have fully ‘crossed over’ into being an Arsenal history nerd now.

One of the things that struck me the most as I have read over Mark and Andy’s notes, is just how far removed Royal Arsenal are from the Arsenal Football Club we all know today. It sounds like an obvious thing to say, but I was struck by how emphatically Royal Arsenal were referred to as something really quite separate from Arsenal FC.

It reminded me of the analogy of the ship. If, over many years, different parts of the ship are gradually replaced as age wearies it, to the point that it has none of its original materials save for its name, is it really the same ship any longer? In poring over these pages, I have come to the conclusion that it really isn’t, only the name remains. I became convinced during this process that the club’s creators would be of a similar mind were they to see the fruits of their creation today.

During the process of working on this book, I reflected on how easily the journey towards the Arsenal that we see today could have been drastically altered. The men that built the club will never have any idea of the significance of some of those early issues that they wrestled with. The atmosphere of survival and progression in which they operated has spawned one of the world’s most recognised and thriving sporting corporations.

I daydreamed on many occasions at how some of Arsenal’s alternate realities might have looked. What if they had been forced to swallow the surging rent at the Invicta Ground? Would Arsenal have tumbled into total irrelevance? Even extinction? What if the Weaver clique had succeeded in their attempted hostile takeover of the club in those early years? I couldn’t help but draw modern comparisons with the cold war between Kroenke and Usmanov.

The way in which Royal Arsenal used the local press to covertly disseminate information has been adapted in a more global sense in the modern day. The battle to turn the club from an amateur concern into a professional outfit in 1891 is undoubtedly the single most important decision the club has ever taken. Had Royal Arsenal remained amateur, I am certain they would have joined the myriad of other Victorian clubs that faded into total obscurity.

You will read about that gruelling process in this book. You will read about exactly what happened and several myths that have survived about those years will be shattered. The identity of the true movers and shakers of this embryonic football club will be revealed to you. Did you ever hear the story of how Nottingham Forest supplied Royal Arsenal with their first football kit? Read on and discover how this unverified fact- that has survived for generations- is not all that it seems.

This is a text that deconstructs accepted facts as often as it discovers new ones. Writing a book that forensically documents the early history of a football club inevitably attracts a fairly niche audience. For the curious, looking to learn a little something about England’s establishment club, I hope you undergo a similar transformation to the one that I underwent as I became familiar with Mark and Andy’s work.

I hope this book informs you, as it did me and we really hope you enjoy it. But most of all, I hope the book persuades you of its importance and that you too become exceptionally grateful for the tireless work of historians such as Mark and Andy.