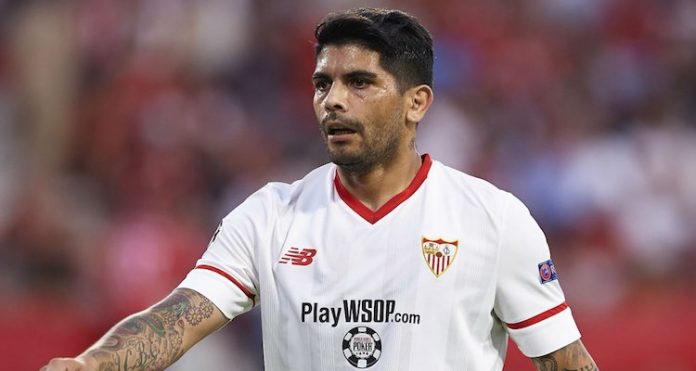 The departure of Jack Wilshere, as covered yesterday, was hardly unexpected but still leaves us a little light in central midfield.

It is expected we’ll be signing Uruguayan Lucas Torreira from Sampdoria to fill that particular gap. I’m guessing that deal will be done once his nation’s participation in the World Cup is complete – and yesterday they won 1-0 to ensure passage into the knock-out rounds, so it’s likely to be another week to ten days at least.

Assuming he arrives, our options for that area of the pitch will be Aaron Ramsey, Granit Xhaka, Mohamed Elneny, Ainsley Maitland-Niles and Torreira. Alex Iwobi can play there, and has played there in the past, but generally it’s been during a game when we’ve shifted things around to get as many attacking players on the pitch as possible. I can’t recall too many starts, and I’m not sure it’s his best position anyway.

So, when you consider the fact we have the Premier League and Europa League to contend with, as well as the FA Cup and League Cup, just five ‘established’ central midfield players seems a bit light to me. Especially as one, Maitland-Niles, is in the nascent stages of his career and we have to factor in the fluctuations in form/confidence that young players often go through.

That kind of schedule, the Thursday to Sunday demands of domestic and European football, injuries, suspensions and the vagaries of football itself, mean we need a bit more depth in that area of the pitch, which would go some way to explaining rumours of a move for Sevilla’s Ever Banega.

The Argentine’s links with new boss Unai Emery are well established. The Spaniard managed him at both Valencia and Sevilla, and at 29 (although he’s 30 at the end of this month but until then remains 29), he’s got plenty of experience for club and country. It’s often the kind of signing that a new manager likes to make, bringing in somebody they know well, a trusted lieutenant kind of thing.

If not quite Arsene Wenger and Remi Garde, it wouldn’t be dissimilar. So far the signings we’ve made have been driven by Sven and his team. Stephan Lichtsteiner is an experienced right back, brought in as cover for Hector Bellerin, but his deal was in the pipeline before the announcement of Emery and had nothing to do with him.

The expected arrival of Sokratis Papastathopoulos is Sven going back to what he knows best, Borussia Dortmund, and the German Head of Recruitment brought in a German goalkeeper that he championed above all other potential candidates this summer, believing in his potential.

We’ve been linked with other players currently playing in Germany, such as Caglar Soyuncu and Benjamin Pavard, and it all feels very Sven. As Sven as Sven can be, which is fine, that’s his job, and much like Arsene Wenger raided the French market he knew so well when he first arrived, I don’t think there’s anything particularly wrong with Mislintat using his connections back home to find us players. There’s time for the scope of his scouting to expand and right now Arsenal are in rebuilding mode.

However, while the new structures seem very defined, a manager or a head coach or whatever you want to call him, has to have some input into his playing squad, and someone like Banega makes a lot of sense on a footballing level, but also from Emery’s point of view too.

He might have fact files and scouting reports and video analysis and data and everything else about this current crop of players, but he doesn’t really know them yet. That will only come from working with them day in, day out, for weeks and months. Banega is someone he knows well already. He knows what he can do on the pitch, he knows that kind of character he is, he knows how to get the best out of him and how he might benefit others in this Arsenal squad.

Some have suggested that rumours around him suggest another departure, and the worry of course is that Aaron Ramsey’s contract situation has not yet been sorted. He has just over a year left on his current deal, and should he decide not to renew, then we’re going to have to make a decision there. Given how valuable he is, the only option if he won’t sign is to sell, but even with the signing of Banega, we’d left in the same situation in terms of numbers and depth if that happened.

There isn’t even an obvious up and comer from the youth academy. Although Joe Willock played some games last season, he strikes me as someone who could do with a season on loan somewhere to develop as player as well as physically (he’s only 18), before he can really be considered a realistic option.

The ideal scenario is Ramsey signs on and we bring in Banega. I think that would provide us with the options and numbers to see us through a season, as well as creating a good level of competition within the squad. This summer has been so far so good in terms of recruitment, and there’s obviously a bit more to come, so hopefully the midfield issue is one we address properly because it has, for so long, been something of an Achilles heel.

Just a note for Arseblog Members on Patreon, you can now find my in-depth podcast with former Gunner Philippe Senderos who talks really well about his life in football, his career, his time with Arsenal, and what the club still means to him.

If you’re not a member and you’d like to listen, you can sign up for just €5 per month + VAT – that podcast is right here. As well as exclusive access to that podcast and all the other content there, your support enables us to do what we do here on the site without having to deal with clickbait, intrusive advertising or anything of the other Internet annoyances that are so prevalent these days.

If you like what you do, and you feel like you can chip in the price of a pint each month, your subscription would be greatly appreciated. Sign up at patreon.com/arseblog.

Right, that’s that no. There’s no specific Arsenal interest at the World Cup today, although Banega could play for Argentina against Croatia which is the tastiest of today’s fixtures.

Back tomorrow with an Arsecast, and all the rest. Until then.