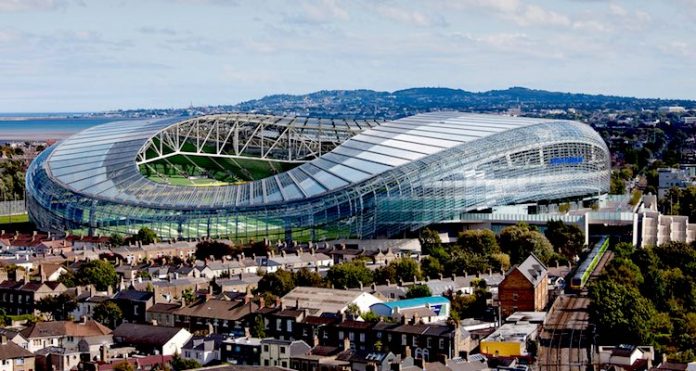 Good morning from a very wild and windy Dublin, hopefully it will be a bit more clement here when Arsenal visit in August for a pre-season friendly against Chelsea. Details of that game were announced yesterday, it’ll take place at Lansdowne Road (Aviva Stadium) with an 8.05pm kick off.

We had been due to play Chelsea in Stockholm on August 4th, but because they won the FA Cup (haha Mourinho), they’re playing in the Community Shield that weekend against Man City. The game in Sweden is still going ahead, by the way, with different opposition – reportedly Spanish – to be announced shortly.

Still, it’ll be good to see Arsenal over here, and some Arsenal chums who will have to do the airport thing hungover the next day when I can just lie around at home for a change. In seriousness though, it’s our second last pre-season game so it’s one that new boss Unai Emery will have to take relatively seriously, and we should be assured of a decent line-up that day.

The ticket prices have raised some eyebrows, £55 is steep for a pre-season friendly, but I guess that’s the way it goes now. These game are promoted via a third party under the auspices of the ludicrously named ‘International Champions Cup’, and clubs are essentially paid for their participation.

They do enter into these contracts willingly though and, as some have pointed out, could make a stand about high ticket prices but we’re looking at this through the prism of fandom and they’re looking at it through the prism of business. Pre-season is no longer just about preparing for a new season, it’s another revenue stream, and when you have a captive audience – many of whom don’t get the chance to see the team – then you know you can gouge them.

Does that make it right? Of course not, but that’s the way it works. They know demand will outstrip supply and that while some will take a stand and say it’s too expensive, enough will pay up and ensure the game is sold out. It’s not just Arsenal either. Tickets for Liverpool v Napoli in Dublin a few days later start at €60 too, and I’m sure whenever Premier League teams travel the world, the tickets are similarly positioned in local markets.

Maybe one day we’ll reach a kind of breaking point, particularly for what’s basically an exhibition game, but we don’t appear to be there right now. Anyway, Arsenal in Dublin sounds like fun to me, I’ll be there, and maybe, just maybe, there might be time for a pint or two before and after.

Meanwhile there’s nothing further on the signings I wrote about in yesterday’s blog, but there are a lot of ‘closer and closer’ stories doing the rounds. We’re in the X player has started following Arsenal/Arsenal players on Instagram, and Y player’s brother’s friend’s cousin’s mate has send a friend request on LinkedIn to the club’s Head of Umbrella Purchasing.

There’s no more surefire way of knowing a transfer is going to happen than vague social media connections. Details on those deals as and when they go through, but like many I’m enthused by the fact we’re at least trying to get business done in June. I think there’s perhaps a bit more work to do on this squad than people think. I’m expecting a departure or three as well as arrivals, so it’s good to see us address some of the issues this early in the summer.

The efficacy of those deals is not something we can really discuss until we see these players on the pitch, doing what Unai Emery wants them to do, but I’d much rather see us active now than reactive later – as has sometimes/often been the case in recent years.

Our Premier League fixtures are announced this morning as well, with the caveat that this is just the outline list of who we play and in what order. Dates and times are subject to change at the whim of broadcasters, so if you’re thinking about booking travel or anything based on what emerges today, then don’t.

It’ll probably be a couple of weeks before we find out which games have been moved for TV, so bide your time a bit there. As we discussed on the Arsecast Extra this week, I’d be pretty pleased if we got a relatively unchallenging start to the season – no Anfield away on the opening day for example – but we don’t get to pick and choose, so que sera, sera.

Finally for today, the World Cup starts later on. Normally I’d be pretty excited for it, and the novelty of football on throughout the day during the group stages is pretty cool, but I don’t know that I’m up for this one as much as I have been for tournaments in the past.

Perhaps it’s me. Perhaps it’s getting older and more cynical. Perhaps it’s football ennui. But perhaps it’s seeing what a circus FIFA has been down the years, the rampant commercialisation (which I realise is nothing new), the sense that beneath it all lies a grotty layer of corruption which isn’t just about the fat cats getting richer but the downtrodden and marginalised being trampled on even more, and all that.

I love football but more and more it becomes difficult to overlook the moral quandaries it poses us. And I say that as someone who has, just a few paragraphs ago, signalled my willingness to pay for an expensive ticket to see my team in my home town which all feeds into the same thing, but there you go.

Anyway, maybe when the football starts those things will fade away into the background, but if you can look at Russia v Saudi Arabia entirely through the prism of sport and football, then fair to play you. I also apologise for the plethora of prisms in today’s blog. I will ensure that prismology is at a minimum tomorrow when I’ll be back with more guff, waffle and a steaming new podcast.

Arsenal beat Chelsea in Dublin – thoughts and observations from the game