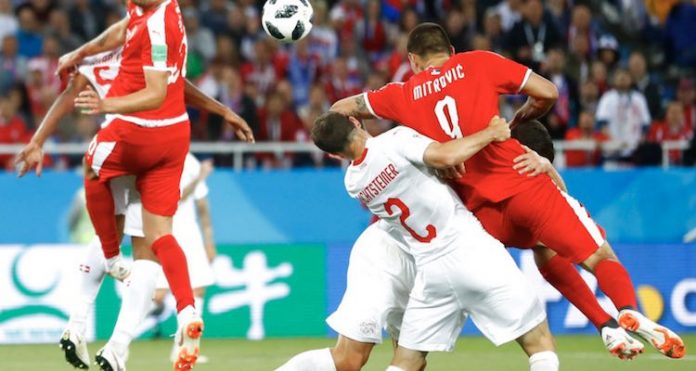 There have been more reports over the weekend that Arsenal have stepped up interest in midfielder Ever Banega. Sport Witness tell us that there has been a telephone call from Unai Emery to the Argentine as he tries to ‘seduce’ him with a move to North London.

The bit that caught my eye from this story was the bit where it said Banega had a ‘bit of a temper’, and perhaps that’s something that is relevant only to the way his friend at his current club was treated, but if it’s something he carries onto to the pitch then there appears to be a clear decision to make Arsenal less nice next season.

Stephan Lichtsteiner is famously a bit of a bastard. On Swedish TV, a referee called Jonas Eriksson said of the former Juventus man:

I have met several international players and to judge a person you have to meet them several times – and not just once when they have a bad day, because everyone can have it. But I have met Lichtsteiner several times and he is one of the most unpleasant players I met. You cannot talk to him, he gets more and more angry.

I don’t know much about Jonas Eriksson, and I’m always a bit suspicious of referees who find themselves in the public eye and tell tales from their careers. They’re almost always dickheads, but that aside, it’s pretty obvious that the Swiss international is someone who has an edge to him, shall we say.

Similarly, Sokratis Papastathopoulos who is set to join early next month, is another player with a bit of that to his game. He’s an aggressive player who plays in an uncompromising manner, and adding that to the centre of our defence is a bit of a shift away from what we have at the moment.

Those hoping for South American shithousery from rumoured new arrival Lucas Torreira will be disappointed as that’s not really part of his game, but it still feels like we’re addressing the character of the squad as well as footballing aspects of it this summer.

And on paper that’s great. It’s easy to see how this Arsenal side could do with a bit more aggression at times, an unwillingness to be bullied, and a touch of nastiness to it. I don’t mean leg-breaky nastiness, but the kind of ‘dark arts’ we’ve been subjected to so many times down the years that might have served us well in the same period.

Our best teams, our most beloved teams have always had it. Some of our best players have had it. As people hark to the past as a guide for what we should do now and in the future, it’s something that almost always comes up. It’s a bit reductive, I don’t think saying ‘Get a new Vieira’ is particularly useful, but you can see why it’s attractive to people.

As much as football is about tactics, organisation, discipline, hard work and the quality of the players, there are aspects which remain impossible to measure. The intangibles play a part, character is one of those, and although we all judge these things through our own prisms, we can generally tell the difference between feeble and feisty.

Nevertheless, these things can also come at a cost. From this standpoint in mid-summer, as we’re enjoying the World Cup, we can look at Lichtsteiner wrestling an opponent in the box and getting away and think ‘We need a bit of that’. Come the new season though, if he does that and a real referee sees it for exactly what it is, we might bemoan the stupidity of a player of that experience doing something so obvious.

It’s not a case of be careful what you wish for, but just remember that what you wish for has a price and consequences which might not always be to your taste. That said, I’m generally for Arsenal being a bit more snide, because like it or not it’s part and parcel of football (at all levels), and I do believe we could use a bit of toughening up.

Meanwhile, at the World Cup there was only David Ospina to provide any Arsenal interest, and he showcased the very best of his game yesterday … with a number of stoppages for him to do that thing he does best: get somewhat injured.

David Ospina's super power is being slightly hurt by anything.

Still, his Colombia side beat Poland 3-0 and that means the Poles go home after two disappointing defeats. Japan and Senegal drew 2-2, and England went goal crazy beating Panama 6-1. A great result for Gareth Southgate’s team but there are much stiffer tests to come. Still, you can only beat the teams you’re playing and scoring that many will certainly boost the confidence.

Today we have Saudi Arabia v Egypt in a dead rubber, while Uruguay face Russia – hopefully we might see Torreira from the start as their qualification for the knockout stages is assured. Later it’s Iran v Portugal, and perhaps Nacho Monreal might play as Spain face Morocco.

James and I will have an Arsecast Extra for you a bit later on, so if you have any questions or topics for discussion, please send them to us on Twitter @gunnerblog and @arseblog with the hashtag #arsecastextra and we’ll get to as many as we can.