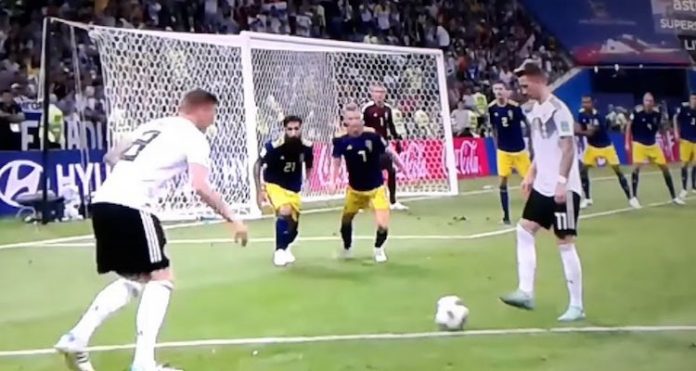 Morning, it’s a glorious day here in Dublin so a quick round-up of all the Arsenal news for you right now.

There you go. Have a wonderful day.

At the World Cup, Germany left it very, very late to beat Sweden 2-1, but the main talking point from our perspective was the absence of Mesut Ozil who was left on the bench after their 1-0 defeat to Mexico in the opening game. Was it tactical? Was this back problem or knee problem he’s been suffering with a factor? In any event, he was left there and stayed there for the whole game.

Ola Toivonen put Sweden ahead in the first half with a lovely goal, but before that we saw something I suspect will become more of a talking point in the future. VAR has, I think, been a success at this tournament, but we’ve had a few incidents which, after seeing a replay, show that something has been missed.

Think Harry Kane against Tunisia, the two Swiss fellas (Lichtsteiner being one of them), wrestling the Serbian striker as he tried to win a header in the box, and last night Boateng clearly pushed one of the Swedish players in the back as he drove into the box and to my mind that was a penalty.

The referee missed it, and isn’t that the point of VAR? It was a clear push, it had a very obvious impact on his balance, but in this case they decided against it being used to let the referee make a decision. So, much like with real people and real referees, we’re going to be asking: where is the consistency?

The one in the Switzerland game was ludicrous, if being held down by two men who have their arms around you can’t be given as a penalty then there’s something wrong. Is it a case that they don’t want to open the Pandora’s Box of grappling? Because at every corner and free kick there are players pushing, shoving, pulling, tugging shirts and all the rest. There are probably a couple of penalties and a couple of free kicks at each one, so who gets the decision? It’s not easy but as we go on we’re beginning to see why VAR will be useful but also another delivery method for contention.

Anyway, Germany got a goal back through Marco Reus early in the second half, but when Boateng was sent off, Sweden should at least have taken a point from the game. They never looked like a team with a man advantage though, and when they conceded a silly free kick just outside the box on the left hand side, Toni Kroos scored a cracker to make it 2-1.

It was a spectacular finish, but I don’t think the Swedish keeper set up his wall particularly well, giving the Real Madrid man the angle and space for the shot. The execution was impressive, no doubt, but I’m sure Robin Olsen will have regrets about that. Heartbreaking for Sweden, and while Germany show that you can’t ever write them off, their performance overall wasn’t much to write home about.

Earlier in the day I watched most of the first half of Tunisia v Belgium in a kebab shop which had commentary from Turkish TV, I think. To say the guy was excited by everything would be an understatement, and although I didn’t have any clue what he was saying, it was fun to listen to and added some exotic foreign spice to the game (on top of what was already on my lamb doner).

Belgium were very impressive, perhaps putting England’s struggles against Tunisia into some perspective. Thierry Henry is part of their camp, of course, assistant to Roberto Martinez, and with the attacking talent they have they’re going to cause teams a lot of problems.

I didn’t see much of Mexico v South Korea, but a 2-1 win sends the Mexicans into the knock-out stages and there was a goal from the penalty spot for former Gunner Carlos Vela. Today England face Panama, wish we knew what the team was, that might be something of a talking point for what should be a pretty routine win. Later it’s Japan v Senegal and Poland v Colombia, with wee David Ospina in goal for the South Americans.

Finally, speaking of commentary, we’re lucky here to have former Irish manager Brian Kerr as one of the co-commentators on RTE. He has a wonderfully Dublin way with words which is great to listen to. At one point during the Belgium Tunisia game he spoke about a potential collision between two players saying of one, “He looked like was going to mill him out of it there.”

I hope somebody is putting together a compilation of his best bits so the world can share in it afterwards, but to give you a flavour of it, this is him on Premier League radio duty earlier this season talking about Xherdan Shaqiri. Have a great day, more from me tomorrow.

Everyone deserves to hear Brian Kerr‘s description of Xherdan Shaqiri because Brian Kerr is a national treasure #WorldCup pic.twitter.com/GsbPpbdWB0