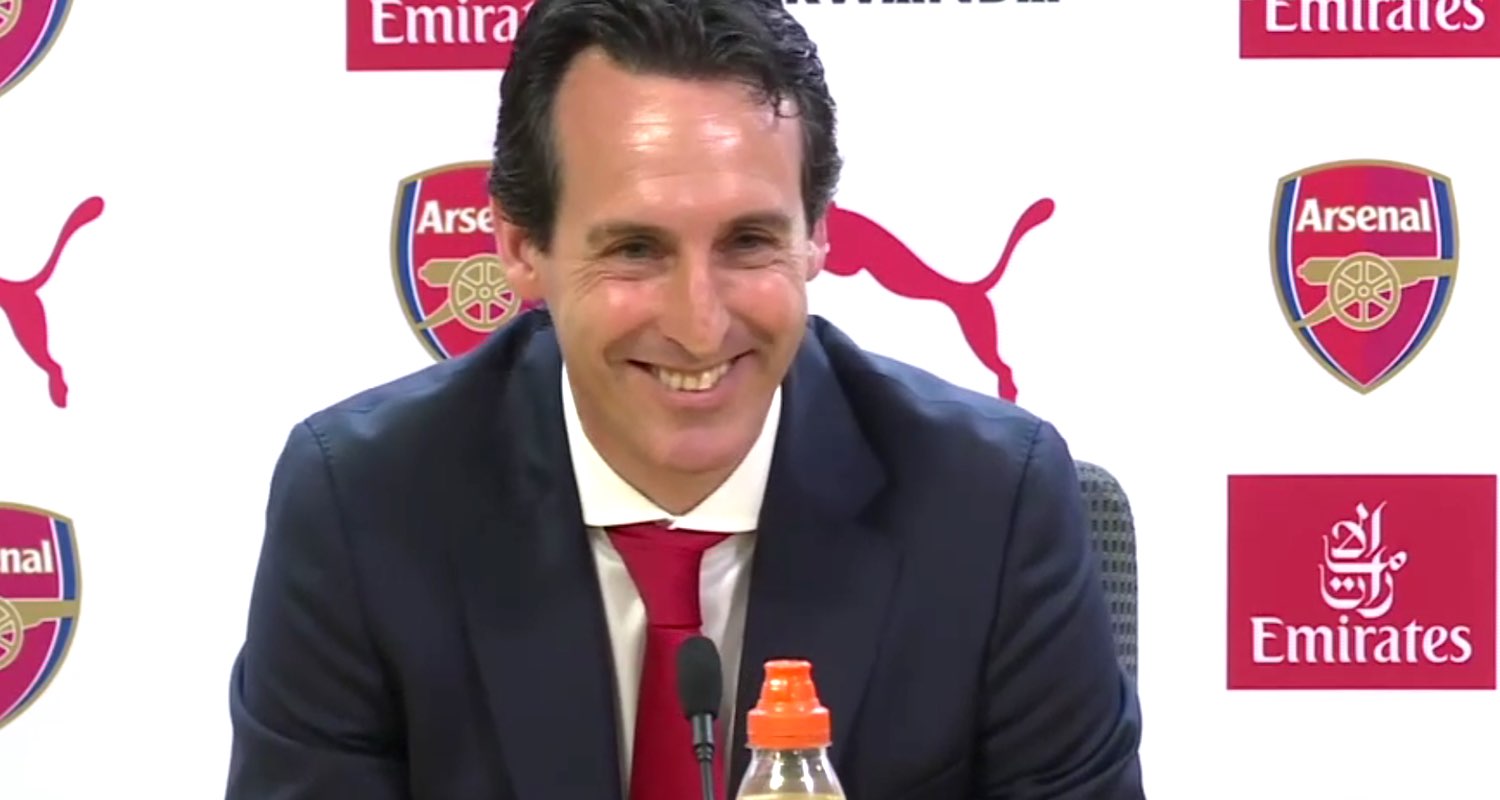 New head coach Unai Emery met the press for the first time at the Emirates Stadium today. Watching it on video it came across as an impressive performance from the Spaniard, and for a view of the events from much closer, James from @gunnerblog was there and sends this report.

After 22 years, there is a new man in the hot-seat. What was once the manager’s chair now belongs to a new ‘Head Coach’: Unai Emery.

Within moments of the press conference starting, the wisdom of Arsenal appointing an experienced manager became apparent. Emery strode into the room with a smile. He did not show a trace of nerves. This was a composed, professional performance.

It was ballsy too. He gave his opening address in English, and answered most of the subsequent questions in what is presumably his fourth language. That show of willing will have won him fans among journalists and supporters alike. There is room for improvement—as he put it, his English is “not very best”—but he was far more adept than we had been led to believe. Communication is not going to be a problem.

Nevertheless, press conferences are going to be rather different next season—and not just because of Emery’s halting English. Even in his native Spanish, Emery is a less poetic figure than Arsene Wenger. This has been regarded as a pragmatic appointment, and he seems like a relatively pragmatic man. That’s not necessarily a bad thing for Arsenal: this has been a team sorely lacking in identity, and Emery’s clarity of vision will be hugely important in shaping the fortunes of this side next season.

Talking largely in English was not only a brave move, but a smart one—it protected him from having to delve too deep into the details of individual players and transfer policy. However, he was willing to open up on his football philosophy. Emery summed up his sporting principles by citing with ‘three Ps’ — protagonism, possession and pressing:

That will be music to the ears of Arsenal fans who have grown tired of the team’s passive play, both with and without the ball. His mention of “pressing” appears to have really struck a chord with the fans. The idea that Emery might be able to harness the athleticism of the likes of Pierre-Emerick Aubameyang, Alexandre Lacazette and Aaron Ramsey into a coherent pressing strategy is undoubtedly an exciting one.

The press conference actually began with some opening words from Ivan Gazidis, but I promised myself I’d get through at least half this piece without mentioning Arsenal’s chief executive. Gazidis appears to have made every effort to put himself front and centre of this appointment, even taking Emery on a cringe-worthy staged tour of the Emirates Stadium.

There is understandable unease among sections of the Arsenal support about the manner in which Gazidis is positioning himself. It seems clear he’s determined to take a more active role in football matters, and that’s cause for concern for some.

Personally, I’m prepared to cut him a bit of slack here. You can’t on the one hand call for the board to have a more visible, vocal presence, then complain whenever someone sticks their head above the parapet. It would have been unwise to throw Emery out there alone, and who would we rather have sat alongside him? Sir Chips? Perhaps not.

In fairness to Gazidis, he laid out the recruitment process as clearly as he possibly could:

“We analysed and looked through – on the basis that every coach in the world would be interested – a lot of coaches and made a long list of eight coaches, all of whom were interested and who took place in extensive, in-depth interviews with the three of us. None of them withdrew their interest; all of them were interested until the end.

“We interviewed Unai on 10 May as part of that process, making a unanimous recommendation to the board on 18 May with a 100-page dossier that supported his candidacy.”

This is the kind of transparency Arsenal fans have craved for some time. We asked for a more engaged, candid, football-minded board. Well, now we’ve got it. Sometimes it feels like Gazidis is damned if he does and damned if he doesn’t. Perhaps that’s simply the price you pay for being a multi-million pound executive?

Ultimately, Gazidis made it plain that Emery was anointed by a three-man committee consistent of himself, Sven Mislintat and Raul Sanllehi. If it doesn’t work out, it’s clearly on them. Accountability has long been an issue at Arsenal—Gazidis’ public posturing means that oughtn’t be the case any longer. He’s nailed his colours to Emery’s mast, and now we’ll see if he sinks or swims.

On early evidence, he’s in good hands. However Gazidis might have tried to force his way into the limelight, this was Emery’s day. It was telling that when the floor was opened up for questions, the vast majority of them were aimed at Emery rather than the chief executive. People wanted to hear from the football man.

In his opening address, Gazidis mentioned a long-list of eight candidates. The greatest compliment I can pay Emery is to note that is that once he had said his piece, there was absolutely no discussion among the assembled journalists of who those other seven might have been. They all, like Gazidis, faded into the background. Emery made this about him, and about the future.

It’s easy to see why Arsenal were so impressed with the bullish Basque. The real judgement will ultimately be down by what happens on the pitch, but this was undoubtedly a strong start.