During the Arsene Wenger era, the manager’s desire to manage the message and to keep things quiet as much as possible dovetailed very nicely with Arsenal’s inherent conservatism and reluctance to play the media game.

‘That’s the Arsenal way’, people would say, but it was as much the Wenger way as it was the club’s. That little smile when asked about a transfer he said he knew nothing about. It could mean that there was more to the story than he was willing to let on, but it could just as easily mean there was nothing going at all.

Things changed a bit down the years because media changed. The Internet was obviously a huge factor in that. Who remembers the message boards on the Arsenal website which, while perhaps not as extremely vitriolic as some of the platforms we know and love today, allowed fans to criticise players on what was an official organ of the club? At some point somebody said ‘Actually, this is probably not a good idea’, they were shut down, and those discussions moved to unofficial channels instead.

The introduction of social media, Twitter and Facebook, changed things also. We’ve seen the birth of ITKs (In The Knows), a pejorative term for those who like to make people think they’re well connected and have information, particularly around things like transfers. Of course there are people who do have good sources and who give info in good faith, but there are also a lot of lying bullshit artists about there who just make things up in a vague way to make it look as if they know stuff when, in fact, they don’t and seek validation for their sad lives through RTs and likes.

Anyway my point is that, despite all those things, Arsenal and Arsene’s natural circumspection were still very much part of how things operated. Now we’re moving into a new era in more ways than one. Obviously a new manager has new ideas, new methods, a new footballing philosophy and a new way of communicating.

Arsene Wenger spoke to us via press conferences and interviews with the official channel or media abroad. He didn’t have Twitter or Instagram, and he didn’t, for example, drop massive news on his own official website like Unai Emery did last night. For a time, this is what the splash page on his site looked like: 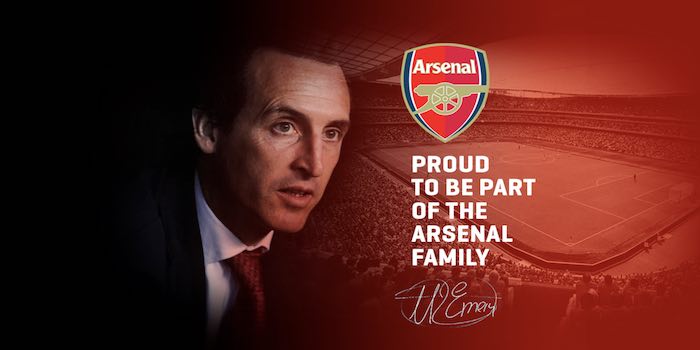 It has since been removed and gives you just a blank white page now because obviously someone at Arsenal reminded him that it was up to the club to make the news official and they weren’t quite ready to do that yet. Maybe this faux pas will see them change their minds again – WELCOME BRENDAN! – but I guess this was just him being all excited about the new job he’s got and jumping the gun a bit.

A quick text to say ‘That’s not how we do things around here, old chap’, has set him straight, but we’re about to appoint a manager who has both Twitter and Instagram accounts. There’s one part of me that thinks it’s probably not a good idea for a manager to be on Twitter, and Arsenal Twitter is certainly a place that would open his eyes in ways he’d probably never even considered.

You can easily imagine him ruined by the relentlessness of it all, sitting like Kurtz from Apocalypse Now, head shaved, in a remote cave somewhere ‘The horror. The horror’, after going down the Arsenal Twitter rabbit hole.

I’d also worry about Instagram. Sometimes you see comments on the club’s account and wonder what it is about Arsenal some of these people like. Narrator’s voice: The answer appears be nothing.

Our club photographers post great pictures of players or games or whatever, and people think it’s acceptable to leave abusive comments about those things. I’m trying to imagine what those people might be like if Unai Emery posts a picture of himself looking sad saying ‘Sorry for the result, next game we try harder!’ after an away defeat in which we defended like twats.

On the other hand, there’s something a bit exciting about a manager who is, like many of us, on those platforms for his own reasons. He’s got his own way of communicating if he chooses. Or if he’s allowed. Arsenal is a club that still very much likes to control the message, as the news of the last couple of days have illustrated.

It’s true of any big organisation, to be fair, but until things changed abruptly over the course of the weekend, all the stories about Mikel Arteta being set to become manager were absolutely true. This was not some kind of smokescreen for Emery or anything like it, we changed our minds. Now we’re going in a different, unexpected direction and that’s fine, but I do think it’s important for people read between the lines a bit and not take everything at face value.

What’s also really interesting about the weeks and months ahead is how much we have to learn. Arsene Wenger was there so long we knew everything about him. There was a collective knowledge, like stories passed down from one generation to the next about who he was, what he did and how he did it. It was kind of fundamental to our existence as Arsenal fans. To co-opt a particular phrase, we almost had Wenger DNA.

That’s not the case with Emery. There are some who know him better than others, who will have followed his career more closely, while for many we’ve got to study up a bit, examine what kind of a man and manager he might be, before we experience it and assimilate that knowledge along the way.

I thought this collection of quotes on Football 365 was quite interesting. They come from the man himself and also from some of his players and people who have worked with him. We’ve read stories about how focused he is on the opposition, on using video with players to prepare them and to help develop them. USB sticks, all of that stuff, is markedly different from Wenger, and I really don’t think it would do this group of players any harm to experience such a different methodology and to have, perhaps, someone who demands from them for the sake of the team than looking to make them the best player they can be for themselves.

This is a whole new era, in more ways than one. For Arsenal, for the players, for Unai Emery, and for the fans.