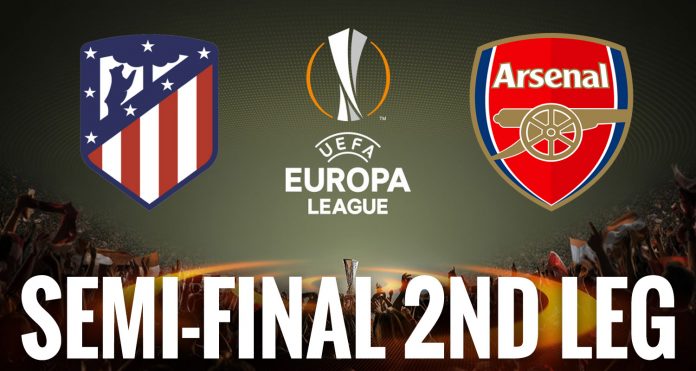 Good morning from Spain as we prepare for the semi-final second leg against Atletico Madrid.

The mood among the fans I was with last night was hopeful. Despite the fact we made a mess of the first leg – and there’s really no other way of looking at it – this is a finely poised game which could go either way.

At home, with their defensive record, and with our ability to make calamitous errors at the back, you have to say Diego Simeone’s team are clearly the favourites. But then if you’ve been following Arsenal for any period of time, you’ll know that we’re not necessarily inclined to do things the easy way, and so here we are with another real challenge on our hands this evening.

What we have to do is clear: score at least once against a team so parsimonious at home it would refuse its own child a biscuit. If they score one, it doesn’t change things that dramatically, we just have to score another one or keep them out to the point where we can knock them out on penalties with Petr Cech making all the saves after he comes on for David Ospina whose mid-game injury actually turns out to be an injury and not an excuse to have a bit of a lie down.

Arsene Wenger certainly doesn’t seem to be paying too much heed to their defensive record, saying yesterday:

The history has to stop somewhere, that is what we will try to do. In the first game we created chances but we didn’t manage to put them in the net. We have to keep the same commitment , not focus too much on where we play, just how we attack and build the game up from the back.

Of course most of the chances we created last week were against ten men, but the opening few minutes might provide some encouragement. When it was still 11 v 11 we managed to craft a couple of good opportunities and that’s what we’ve got to hang onto going into this game.

They’ll have Diego Costa fit again and ready to cause our defence some problems. Watch him attach himself to Mustafi like a limpet, looking for force an error and take advantage of the German’s indifferent form of late, while Antoine Griezmann already knows he’s capable of getting the best of his international teammate Laurent Koscielny.

Our strengths are not at the back, we all know this, but we do have plenty of attacking talent, boosted by the return of Henrikh Mkhitaryan from injury. It will be interesting to see if the manager plays him from the start, having a go at them from the off, or if he picks the same team as last week looking to keep it as tight as possible before trying to get what we need later in the game.

We do have players capable of getting goals though. Alexandre Lacazette has seven in his last seven games; Aaron Ramsey have five in seven; and Danny Welbeck, while not scoring at the same rate, looks sharper and more involved than he has done for some time because he’s stayed fit.

When you have someone like Mesut Ozil pulling the strings, and the experience and quality of Mkhitaryan, you’ve got the potential to cause problems for most teams. To have a realistic chance of going through, I think we need almost all of those players to be on it tonight, and to be far more efficient with the chances we create.

I would like to finish my job well. I believe a man has to give his best as long as he is somewhere, with all his commitment and energy. I would like one day to know I worked with all my energy until the last day. I would like to look back and think I finished this love affair well.

If that’s in the players minds and if it gives them a bit of extra motivation, then fine, but this is a European semi-final and that’s should be enough to elicit the kind of performance and commitment required.

As I said earlier, it’s going to be challenge but it’s an exciting one. I’m hoping we can do what we did against Man City last season in the FA Cup semi-final, and even Chelsea in the final – pull off a hard-working performance that nobody really expects and then it will be on to Lyon, fingers crossed.

I don’t think we’re defensively strong enough out keep them out for 90, or even 120 minutes, so it’s all on the attack. It’s something akin to a shoot-out, I guess, unless they strangle the life out of the game, but that’s a dangerous enough ploy as one goal is all we might need.

Anyway, I’m going to go and get coffee and some more jamón and get myself worked up for later on. Fingers crossed, everything crossed, and come on Arsenal!