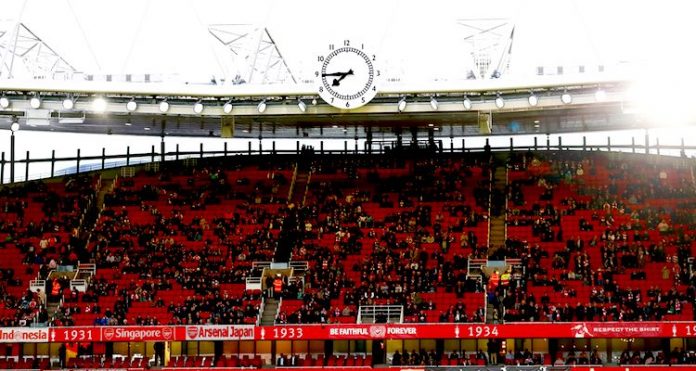 It was, generally speaking, a fairly uneventful press conference yesterday, as the manager spoke ahead of the West Ham game on Sunday. We can do some of the team news etc a little closer to the game, but the one stand-out piece of injury info is that Henrikh Mkhitaryan could be fit for next Thursday when we play Atletico Madrid in the semi-final of the Europa League.

Clearly that would be a real bonus as his experience and quality would make us stronger against a very good side, but for now we’ll keep fingers crossed he makes it – if not even for that game but for the second-leg where I feel he’d be even more important. I am making the assumption that the second leg will be still competitive, not out of blind optimism or anything, but because our home form has generally been pretty decent this season.

It’s the away form that’s the killer, and it’s the away form that has contributed so greatly to the empty seats we see at every game at the Emirates now. The Atletico game has sold out, which is not unexpected. An important game against top quality opposition in a tournament which means something is always going to be more attractive to people than a Sunday lunchtime encounter with the likes of Stoke. That is human nature.

Yet the empty seats, as with everything else these days, spark debate. Are fans who have paid for their tickets but don’t turn up self-entitled, or is it their way of protesting against the inertia many feel? Whether the protest is active or passive (those who just can’t be arsed to go because they’re no longer engaged), the end result is the same: swathes of empty seats in a stadium which has, for the most part, almost always been full during Arsene Wenger’s time at the club.

It’s why, when asked about it yesterday, the manager’s comments were – if understandably a bit defensive – a bit disappointing on the issue. He can’t be blind to what’s going on, he even touches on why, but it sounds like a man making excuses. Was he worried about the empty seats?

It’s not a big concern because our crowd is very solid at the moment. Of course, we have played on some special days, we don’t go for the league. I believe we have a very faithful crowd, very faithful fans, who will always be there and support the club. When you look at the renewal numbers for next season, they are absolutely outstanding.

Beyond Club Level, renewals haven’t even gone out yet, and even then the sales team are on a big drive at the moment reaching out to lots of people to offer them tickets for next season. The key issue though is that most Arsenal games are sold out, and that seems to be the safety net we’re clinging to, as the manager continued:

We are sold out in every single game so I don’t know where the problem is at the moment. I believe if you look at our numbers and how much people want to renew tickets for next season, I don’t believe that we have a major problem.

We have a major problem at the moment because we’re not in a position to win the league. That’s our biggest problem. The biggest problem is not the number of fans who are behind the team.

He has hit the nail on the head there. The issues we have on the pitch, and our lack of competitiveness, are the main driver behind the empty seats. And the problem is that people who have paid for tickets are not going to games anymore. The books and the balance sheets and ‘attendance’ figure announced at games may look as healthy as ever, but all you need is to look around to see that there’s a real issue here.

I do get that Wenger is not going to rock the boat about this in any significant way. He understands he’s under enough pressure as it is, and we also have a big, big game next week for which a full stadium and passionate fans could play an important part, but some acknowledgement of the problem would have been welcome.

He says we have a problem because we’re not in a position to win the league, so expanding that slightly and saying something about how making the team better will bring the fans back wouldn’t be out of order in any way. Saying ‘I don’t know where the problem is’ when the problem is staring at you from all sides of the stadium isn’t a good look.

Anyway, that issue is something I discuss with Tim Stillman in more depth on today’s Arsecast. You can check it out below, but if we’re going to be critical, we should also give credit where it’s due and the club’s announcement that they’ll subsidise tickets for fans going to the away leg in Madrid is to be commended.

The Spanish fans are being charged £36.50 for their trip to the Emirates, the Arsenal fans were expected to pay £79 for the game at the Wanda Metropolitano. So well done Arsenal, but it should start a conversation about the discrepancy in ticket prices for these games. To charge more than double the price is outrageous, it’s greedy and there needs to be greater harmony going forward.

I guess that people look at English clubs and their wealth due to TV etc, and think fans are that well off by extension. It’s not the case. Fans have to pay for flights, accommodation, and all the rest. The clubs are the wealthy ones, and it shouldn’t be a case that supporters are allowed to be ripped off like this.

Also on today’s Arsecast, a general Premier League chat with Daniel Storey of Football 365, some Europa League, Wenger’s future, and the usual waffle. Listen/subscribe below, and we’ll have all the news throughout the day on Arseblog News.