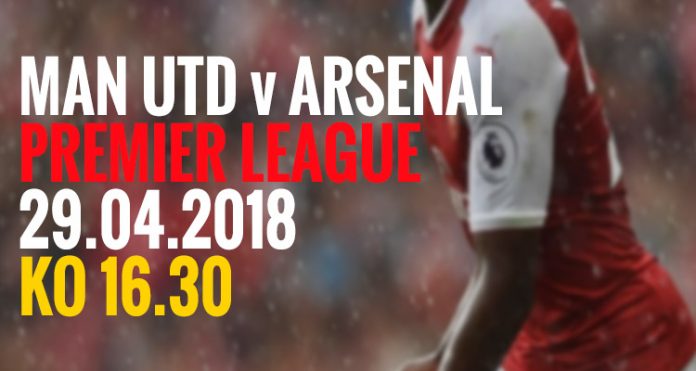 It’s Man Utd v Arsenal today in a game which means as little as any ever has in the Premier League. We have nothing to play for domestically, fourth place is out of our reach and even a win today would leave us 6 points behind 5th with three games left.

Arsene Wenger’s long history at Old Trafford, as I wrote yesterday, is one which has had highs and lows, and I’m sure he’ll be keen not to mark his final game there as Arsenal manager with a defeat. How much that influences his team selection though, remains to be seen.

I tried to create a team made up entirely of players who didn’t play against Atletico and/or won’t necessarily be key men for Thursday’s second leg and came up with this:

I’d even be cautious about playing Mkhitaryan because of his injury but maybe, in order to ensure he’s fully up to speed, he could use some minutes having not played since the start of the month. It’s far from our strongest side, and one I’d have serious doubts about winning with, but then winning this fixture really isn’t the priority.

Granit Xhaka is somebody who he seems to trust in terms of his fitness, Bellerin and Mustafi too, so we might see them add some experience to today’s line-up, but it really is all on how he views the trip to Madrid – not to mention how the players who played on Thursday have recovered. If it is a weak side, at least it’s weak by choice and not because we don’t have the personnel like on an infamous previous visit there.

There’s also a reunion, of sorts, with Alexis Sanchez who will probably be really annoying and play very well today so then loads of people can say ‘Oh Wenger never got that kind of performance out of him’ in the same way they’ve done all season with Oxlade-Chamberlain when he’s played well for Liverpool ignoring the fact that he used to play well for us sometimes but the issue was consistency and injury, two things that seem to be part of his Anfield experience too.

But look, that’s a sidebar to the main event, if you can even call it that. It’d be nice for the manager to get a result there today, but no more than that. It’s a game that has no real bearing on anything, and that’s kinda why it’s going to be his final game at Old Trafford as Arsenal boss.

As ever we’ll have a live blog for you, plus all the reports, players ratings and stats over on Arseblog News afterwards.

Speaking of the manager and what might come afterwards, reports that Luis Enrique wants £200m to spend on players if he’s given the Arsenal job should, essentially, rule him out of the running because there’s no a hope in hell of us spending that much this summer. It would require Stan Kroenke to dip into his own pockets and fund some transfers, and I’d be very, very surprised if that were to happen.

As ever, you have to take these reports with a pinch of salt. The idea that Enrique wants £16m a year is quite funny, because that’s pretty much going to scupper any chances if he really wants the job too. I cannot see this club handing that kind of salary with any long-term contract to any new manager. If things don’t work out, which is entirely possible, you’re left with a payout that would – if we’re to believe the figures – be more substantial than our transfer funds for this summer.

I think Arsenal are going to go this way in the transfer market: Identify young talent that can develop into top class players, buying them relatively cheap, and if we sell them we can sell them high (obviously holding onto them would be best if they do flourish the way we hope).

To me that suggests we’d be more inclined to appoint a manager who is happy to work within that kind of framework, and the ideal candidate for that is one without a great deal of experience or reputation. Someone without the power to make demands. A candidate like Enrique will want big money for established players – for obvious reasons – whereas someone like Vieira or Arteta doesn’t quite have that pull.

I could be wrong, but if feels like the most Arsenal thing to do – particularly as this board, and one man in particular, will want to change the power dynamic completely in the post-Wenger era. They will not want to find themselves in thrall to another powerful figure whose decision making is considered more important than theirs.

Anyway, time will tell. Catch you later on for the game.