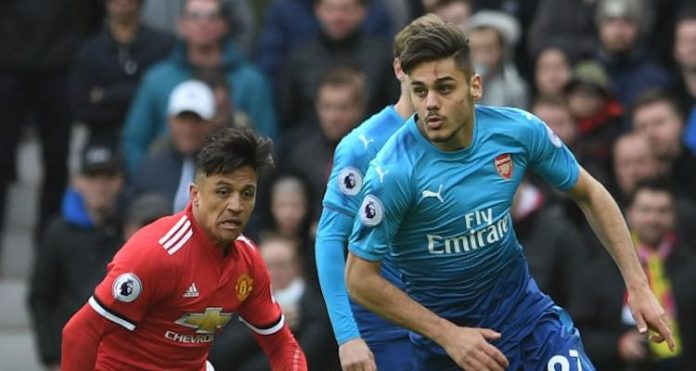 There’s never anything to enjoy losing to Manchester United, and the fact it was a Jose Mourinho managed Manchester United and a Marouane Fellaini winner made it an almost perfect trifecta of cuntery, but in the grand scheme of things there’s not much point in getting bent out of shape about it.

The manager picked a team with Thursday in mind, which was absolutely the right thing to do. Only Granit Xhaka and Hector Bellerin are likely to be involved from the start in Madrid, and the returning Henrikh Mkhitaryan got some minutes under his belt (let’s hope the knee problem he reportedly sustained doesn’t rule him out).

Ordinarily, a team losing its sixth consecutive away game in the league – the worst run Arsenal have endured since 1966 (via @Orbinho) – would spark huge criticism from fans and probably spell the end for the man in charge. For all the understandable sentimentality around Arsene Wenger at the moment, this run is part of why he’s going this summer – and that itself is why there’s no real need to get angry about yesterday.

I’m not saying we should whitewash the result, but simply put it in context: we have a massive European semi-final on Thursday, the team selection had to reflect that, on the day I thought we played quite well, and didn’t deserve to lose. It was a long way from the thrashing many people feared we might get, particularly when they saw the line-up.

Wenger handed a debut to 20 year old defender Konstantinos Mavropanos, pairing him with Calum Chambers in the centre of the defence. Ainsley Maitland-Niles played in midfield, Reiss Nelson in the front three, and David Ospina was in goal despite Petr Cech being on the bench (perhaps a sign for Thursday, and the Colombian did himself no favours late on with their winner if the manager is considering a change).

United started the game more confidently, as you’d expect considering their full strength side, and went ahead in the 16th minute through Paul Pogba. A Lukaku cross found Alexis free at the back post, his goal-bound header was superbly blocked by Bellerin onto the post, but unfortunately it rebounded straight to the French international who finished from close range.

It wasn’t a goal that opened the floodgates though. We played some nice stuff at times, Bellerin created a good chance for Aubameyang but the striker’s header was weak and straight at de Gea. Maitland-Niles was tidy in midfield, but progressive too, some of his passing was excellent and I thought he could have had a penalty when he was fouled by Alexis as he drove into the box but referee Kevin Friend was having none of it (in much the same way he was disinclined to book Ashley Young for a series of clattering fouls on Mkhitaryan).

We equalised early in the second half. Xhaka, the subject of a bizarre Sky hatchet job throughout, won the ball back high up the pitch, fed Mkhitaryan, and the Armenian finished nicely into the bottom corner against his old club. He did that arms in the air non-celebration ‘celebration’ thing when we all know that he really wanted to run up to the dugouts and moon Mourinho, but it was 1-1 and it wasn’t against the run of play at all.

Alexis was being kept really quiet, Lukaku went off after a strong challenge from Mavropanos, and I thought in general we defended well throughout. Between them, the two central defenders made 13 clearances, 6 interceptions, 4 tackles and blocked 4 shots. Although a little less solid on the ball than you might like, and while obviously enamoured with the debutant, I thought Chambers had a very good game – reading dangerous situations well and getting his head to most things first.

Then the sucker punch in injury time took a bit of the gloss off what was a good showing from the young team. United thought they’d won it when Rashford finished after a Fellaini header hit the post, but he was offside. The warning was there though, and when Young cross in the second minute of time added on, the big Belgian headed towards goal and in it went.

I think a top goalkeeper saves that though, and Ospina’s effort to get there was not particularly great. He was very good against Atletico last week, but hardly troubled that much, and he does have a tendency to concede soft goals. Sadly, that’s also been true of Petr Cech this season, which doesn’t make it easy for the manager when it comes to the second leg on Thursday, but of the two I think I’d prefer to see Cech.

It was an unfortunate end to the game, and if you really want to be critical you can use this as another example of why change has been necessary. At 1-1 we should have been able to hang on and take a point, but things are going to change this summer, and hopefully any new manager will be capable of making us a bit more durable at the back.

There were positives though, Mavropanos had a very solid debut in the circumstances, while Maitland-Niles in midfield showed he’s really got something about him as a player. If you consider the work we have to do this summer, there’s no question midfield is an area which requires investment, but if we can add depth from the academy too then all the better.

I also liked Reiss Nelson’s outing. We forget sometimes how big a step up first team football is from the underage levels, and on only his second Premier League start, up against a stalwart like Antonio Valencia, he had some very positive moments before being replaced by Danny Welbeck.

So, to lose so late is always irritating, but this was a game which meant little beyond it being Wenger’s last trip to United. They gave him a commemorative vase, and their fans were kind enough not to sing that song about him for once, but this week is all about Atletico Madrid on Thursday. That’s the game that matters.

It would have been nice for Arsene Wenger to get a result on his final fixture with a team he’s had some enduring battles with down the years, but it would also have been nice to win away from home anywhere in 2018. There were some things to like about yesterday, and I prefer to think about them this morning because we all know what’s happening in a few weeks time anyway.

James and I will have an Arsecast Extra for you later on. If you have any questions or topics for discussion, please send to @gunnerblog and @arseblog with the hashtag #arsecastextra.

Catch you later for the podcast.