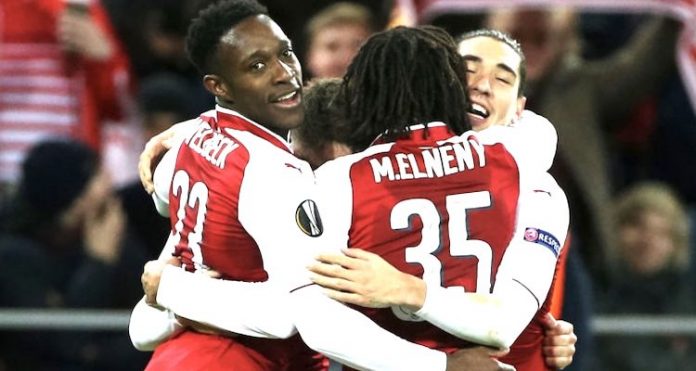 Arsenal are through to the semi-finals of the Europa League, but as ever we did things the Arsenal way. Forget scoring an early goal and putting the opposition out of sight. Instead, we let them score twice, putting them within touching distance of qualification themselves, before Mohamed Elneny decided enough was enough and provided assists for Danny Welbeck and Aaron Ramsey to secure a draw on the night and passage into the next round.

There were no real surprises with the team. Danny Welbeck came in for Henrikh Mkhitaryan, the rest pretty much as expected, with Jack Wilshere keeping his place ahead of Alex Iwobi. The majority of the first half was comfortably dull. CSKA didn’t really threaten despite some now typical Arsenal carelessness, but nor did we cause them too many problems.

It looked as if it was going to be 0-0 at the break, until a cross from the left saw a header on target which Cech got down well to save, but our defence stood admiring the stop and it was Chalov who reacted quickest, knocking the rebound in from close range to give the home side a glimmer of hope at half-time.

That glimmer became something more substantial when we started the second half in strange fashion: moving Elneny back into the back three, sort of. He dropped in to play that hybrid sweeper role he has performed at times this season, but all it did was invite pressure on us. So, when Cech should have done better with a shot from distance and Nababkin made it 2-0 we were reeling a little bit.

The Arsenal keeper made some amends for his mistake for the second by keeping it at 2-0, pushing Golovin’s free kick around the post, and we pushed Elneny back into midfield because that tactical shift did nothing but work against us. That was until we hooked Wilshere who had another poor night, put Calum Chambers into the back three, and paired Elneny with Ramsey in midfield, at which point there was more balance to that formation and the pressure exerted on us eased.

Nevertheless, it was a precarious position to be in. One goal would put them through as it stood, and we didn’t really look in any way dangerous. That was until we produced one the best goals we’ve scored this season in my opinion. Monreal fed Welbeck – who absolutely diddled the defender with a turn on the touchline – drove inside, played it Elneny whose first-time return pass was one Dennis Bergkamp would have been proud of, and the England international was able to finish on the run without breaking stride.

I loved the replay of the Egyptian looking to see if Welbeck would score it, like a golfer watching a long putt, before wheeling off in celebration when he did:

That meant CSKA had to score twice in the last 15 minutes to send the game into extra time, and they never looked like doing that. The wind had been taken out of their sails, and we really should have scored more. Alex Iwobi, on for the ineffective Lacazette, wasted a glorious chance in the last couple of minutes, but as they pushed further forward, we sealed the game with an injury time goal from Aaron Ramsey.

Again it was Elneny who was provider, putting through a perfectly weighted pass behind the defence for the Welshman to get onto and bear down on goal. He had Mesut Ozil outside him, but he was always going to finish, and he clipped the ball beyond Akinfeev to make it 2-2 on the night, and 6-3 on aggregate.

If you look well at the game again, we were in trouble in the first half. Once we moved to a five we looked much more stable and didn’t give so many chances away. The second goal comes from a long distance shot but in the box we didn’t give anything away anymore.

Genuinely, I didn’t think the first half gave us much to worry about. We played very poorly, no question, but it didn’t feel like we were under a great deal of pressure. Conceding the goal late in the half changed things for them, but it was messing around with our formation that really caused us the problems. Moving Elneny between midfield and defence was not a successful tactical shift from the manager, and while we definitely looked more solid when Chambers came on, until then our efforts were half-arsed, to say the least.

I realise it’s a very Arsenal thing to do to put ourselves on the brink of elimination, but I do wish sometimes we wouldn’t be quite so determined to make life difficult for ourselves. So much of it was self-inflicted too. It wasn’t necessarily that CSKA played well, it was that we played badly. Experienced players making bad decisions, being careless with the ball etc, and that’s the worry.

If you’re played off the park by a team who perform brilliantly, that’s one thing, but this not that. This was players who could and should do better playing well below the standards we needed them to. Delighted as I am to qualify, it would be remiss of us to ignore this and gloss over it as if everything was fine.

Still, we are through and that’s something to celebrate and to enjoy. Kudos again to Danny Welbeck whose recent form has been as good as we’ve ever seen from him in an Arsenal shirt. Five goals in his last five games is a very useful return from a wide player, and in the absence of Henrikh Mkhitaryan, he’s stepped up when needed.

Also, Elneny deserves great credit, not just for his two excellent assists, but for the hard-running, hard-working job he did – particularly in the second half when we decided to play him in central midfield again. He covers so much ground, is so reliable with his passing (95% accuracy last night), and when a team is playing poorly in general that kind of effort can make a difference. When you couple it with some incision, as he displayed for the two goals, it makes for a man of the match performance.

So, we’re into the draw this morning for the semi-finals of the Europa League. It’ll be the first time we’ve gone this far in a European competition since 2009 in the Champions League, and the potential opponents are Atletico Madrid, Salzburg and Marseille. Two of those look much less difficult than the other, but at this point you can’t take any team for granted, so que sera, sera.

It’s just nice to be in this position, and the prospect of a European final draws tantalisingly closer. It’s great to have something still to play for this season, and the two-part prize – trophy and qualification for next season’s Champions League – is of huge importance to this club.

More and more the focus will be on this competition rather than the Premier League, and at this point that’s precisely the way it should be. All our eggs ought to be in this basket, and what happens elsewhere really doesn’t mean too much. It’s the Europa League or bust, and it makes the final few weeks of this season genuinely exciting.

We’ll have the draw and all the reaction over on Arseblog News later on, and there’ll be some kind of quick podcast this morning because of the fact we played late last night, so keep an ear out for that.