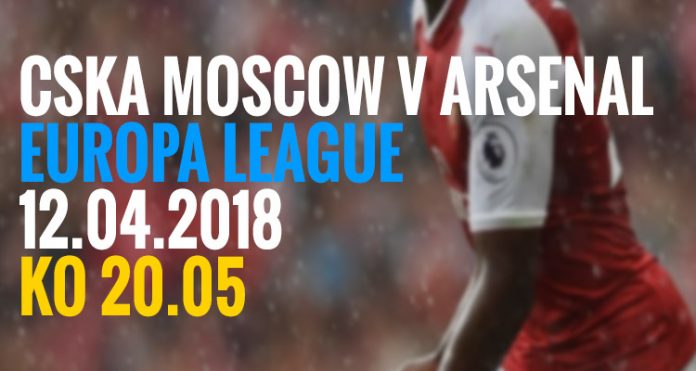 Arsenal are in Russia to take on CSKA Moscow tonight, with a 4-1 lead from the first leg of our Europa League quarter-final. Ordinarily, it’s the kind of position you’d expect a team to cruise through to the semi-finals from, but this week’s football has shown us that you can’t take anything for granted.

We saw what happened to Barcelona in Rome, and last night Juventus almost did the same, overturning a 3-0 deficit against Real Madrid in the Berenbeu until late drama saw the home side awarded a penalty and had Gigi Buffon sent off by Michael Oliver. Wojciech Szczesny came on but could not stop Cristiano Ronaldo scoring, nor could he do anything to prevent another display of half-naked, bulging-veined grotesequery, but that’s a different issue altogether.

Basically, the matches this week have illustrated that nothing is cut and dry. As legendary Ukrainian manager Leonardo Kravitski once said, “It ain’t over till it’s over.”

In terms of the team news, we’re without Granit Xhaka who is ill, while Per Mertesacker has travelled with the squad. Beyond that, and an unspecified injury to Ainsley Maitland-Niles, we have everybody available, the question is how exactly the manager is going to approach this one.

Do we have a go, score quickly, then take off some key men to give them a rest? Or play it a bit more cautiously, keeping some players on the bench who we can use as and when we need them? My suspicion is the former, and while Arsene Wenger was mindful of what has happened this week, his basic philosophy is always to go out and win it:

Last night may be a warning for us but let us not go overboard as well, yes we have a big job to do but we are in a strong position and it is how we approach the game that will be vital tomorrow.

We have an advantage, the best way to build on the advantage is to try to win the game, we play with our best possible team, have a positive attitude and try and win the game.

It doesn’t sound like we’re just going to go there to sit on our lead, and to be fair that’s probably the right way to do it. I don’t think we’re the kind of team that possesses the defensive nous to approach a game that way. It is an area in which we’re dodgy, no question, but in recent weeks that’s been offset by a rediscovered attacking efficiency – and some wastefulness by the opposition – so without being completely gung-ho, having a go is the most likely way to elicit a good Arsenal performance.

We know they have to come out and play. We know they need to score goals. So if they push on and leave spaces for us to counter-attack into, then it could prove successful for us. The centre of their defence is vastly experienced, but it’s not particularly pacy, and that’s something I’m sure Arsene Wenger will be looking to exploit as and when possible.

Our recent form, with six wins from six, also means we should be relatively confident going into this one. The Italian sides in the Champions League have reminded us that things can change pretty quickly over the course of 90 minutes, but it should also serve as a warning not to take this game for granted in any way. Complacency has often been our downfall, so if we haven’t paid attention or think this one is done and dusted already we might be in for a nasty surprise.

We’re definitely a team capable of making life difficult for ourselves, but I think we have enough common sense and certainly enough talent to get the right result and to make our way into the semi-finals. The manager has admitted for the first time that this is the key competition for us now, with the Premier League a sidebar between now and May:

We are at a stage where we focus on it because in the Premier League we have a very, very, very slim chance to move further up so the Europa League is one of the big targets now.

‘One of’. It’s the only target, so let’s hope we perform accordingly tonight, and right the way through to Lyon in May.

If you’re stuck in work later and can’t see the game, we’ll have a live blog for you with up to the second text commentary, video links and more, as well as all the pre and post-match stuff on Arseblog News.

In the meantime, for Arseblog Members on Patreon, there’s another phone-in show during which James and I take calls from listeners who have questions about Hector Bellerin, young players, Mustafi, the manager, Highbury v the Emirates and lots more.

If you’re already a member it’s there for you to listen to and download right now, and if you’re not you can sign up at patreon.com/arseblog for just €5 per month + VAT. There’s an FAQ here if you need more details.

For some extra reading this morning, here’s Tim Stillman on how our forward line has changed so radically in recent times, and I’ll catch you later on for the game.