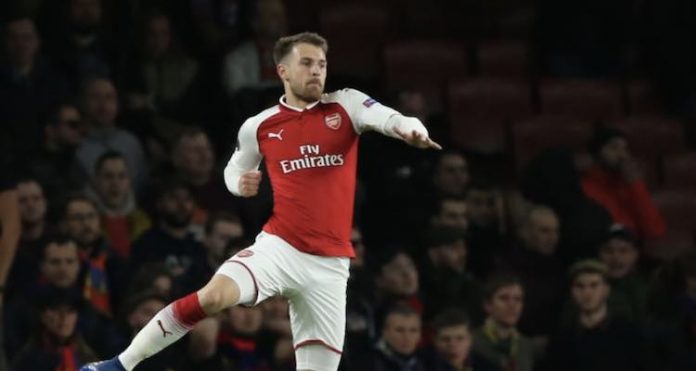 Starting with Arsene Wenger confirming that Arsenal in talks with Aaron Ramsey over a contract. To which I say, ‘You better be’, because he is out stand-out central midfield player and in an area which already needs a serious injection of quality, we simply cannot lose him.

Speaking after the CSKA Moscow win, the manager said:

“We are communicating. Yes, I’m confident, he’s not at the end of his contract, he has one and a half years to go. From my side it is clear, but you always have to find an agreement.

“We want him to stay. He’s one of these guys who has been here for a long time. He will be an important player in the future of this club.”

James, who was at the press conference during which he made these comments, said on the Arsecast Extra yesterday that Wenger sounded ‘unconvincing’, and you wouldn’t have to trawl too hard into the archives to find very similar comments about other players in the past. Quite what that says about us and how often we deal with situations like this is another thing, but there you go.

I would be very surprised if Arsenal, as a club, weren’t doing everything they could to tie Ramsey down to a new deal. Injury problems aside, he is a fantastic footballer and when you consider our current central midfield options, he is about the last one we should be losing. He has 9 goals and 10 assists this season, making him the most productive midfielder have by some distance – and when you have a player with that kind of end product you should do what it takes to keep him.

While Mesut Ozil’s superstar status puts him in a slightly different bracket, the least Ramsey deserves is parity with the likes of Henrikh Mkhitaryan, Pierre-Emerick Aubameyang and Alexandre Lacazette who have joined Arsenal on big, big wages and that’s where Ramsey should be too. If what the club are offering is not in line with that, they’re undervaluing him in a big way, and making a big mistake.

The thing is though, with any contract it takes two to tango. My gut feeling – and I sincerely hope I’m wrong about this – is that Ramsey wants to play elsewhere at some point in his career. He’s spoken about going abroad more than once, something British players rarely consider, and at 27 with a year left on his current deal, it’s a good time for that kind of move.

Obviously I hope he stays, maybe signs a new deal which sees him remain for another couple of seasons before trying his hand in a different league, but I don’t think this one is as cut and dried as people might hope. Money talks, of course, and if we can convince Ozil to stay then we’re capable of doing likewise with Ramsey, so fingers crossed.

Meanwhile, we’re sweating over the fitness of Henrikh Mkhitaryan who limped off during the Europa League win in midweek. He seemed to clash knees with an opponent, which can be very painful, but the manager is fearing ligament damage which could sideline him for a while – perhaps even ending his season. He said:

“He has a scan this afternoon but his medial ligament is touched so he will not be available for Sunday. For how long he will be out we will know that after the scan. But the first impression is not too positive today. I fear [it could be several weeks] and I hope I’m wrong.”

That would be a serious blow if the damage was that bad. Not for the Premier League, but for Europe where we’re already without Aubameyang because he’s cup-tied. Mkhitaryan adds quality and experience to a side that will need it along the way, so all we can do is keep fingers crossed it’s not as bad as they fear it is.

In bringing in Aubameyang and Mkhitaryan, we also moved out Walcott, Sanchez and Giroud, all of whom could have played in Europe, so to be without those two attacking recruits for the rest of our Europa League campaign would be cruel. Obviously we knew about the UEFA rules which precluded the former Dortmund man from playing, but when it comes to the business end of the season, to be without Mkhitaryan would make life more difficult.

Since his arrival he has two goals and six assists, and when we talk about end product from Ramsey as a central midfielder, he gives us that in the final third. Certainly more than the potential replacements for him do anyway. Both Danny Welbeck and Alex Iwobi have struggled this season to contribute in that way, but we’ll have to hope they can find some form if it’s a case that the Armenian is ruled out for any significant period of time.

Right, that’s just about that, I’ll leave you with yesterday’s Arsecast Extra in which we enjoy the shite out of the CSKA Moscow game, wax lyrical over Aaron Ramsey’s goal, and much more. Listen/subscribe below. Back tomorrow with a preview of the Southampton game.