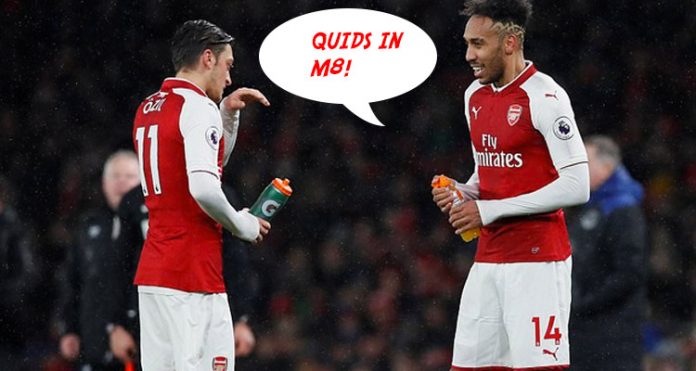 Arsenal head to Italy today ahead of tomorrow’s Europa League Round of 16 first leg against AC Milan.

Things are a bit tough at the moment, and the Arsenal dressing room appears to be a leaky place on top of that. A report in The Times this morning (£) suggests that tensions are growing because of a wage disparity between the top earners and the rest.

As you’ll know, Mesut Ozil was handed a bumper new deal, making him the club’s highest earner ever, while new signings Pierre-Emerick Aubameyang and Henrikh Mkhitaryan have got themselves very healthy contracts. None of which should be any surprise, because a) Arsenal had to push the boat out for Ozil having lost Sanchez, and b) one way of convincing players to join a club which sailing through troubled waters is to ensure they’re very well paid.

Also, when you sign Borussia Dortmund’s top scorer for a record transfer fee, the salary has to be reflective of that, and if anyone believes bringing in a Mino Raiola player will see you get away with lowballing on wages you’d better think again. When you lie down with super-agents you get enormous wage bills.

In the circumstances and the current market, I don’t think there’s anything particularly outrageous about what Arsenal are paying these guys – leaving aside the fact that not a single player deserves anything in their pay packet this month beyond a couple of half eaten buttons, a few butter vouchers and some ham that has that rainbow sheen on it.

However, human nature being what it is, when you create a large discrepancy between some players and the rest, it can cause problems. I’m not saying that’s definitely the case, and any Arsenal player looking for a pay-rise right now would need balls the size of watermelons, but it wouldn’t surprise me if it didn’t cause a problem in the future if it isn’t causing one now.

It’s not that they’ll all want the same wages, but it’s about the gap. A player might well understand why Mesut Ozil is being paid more than him, the star-status, the reputation and all the rest, but he might well think that if Arsenal are prepared to pay him double and a half of what they were paying him before – without yet seeing sufficient return on that investment – that he’s being left a bit undervalued.

The days of the so called ‘socialist wage’ structure at Arsenal are well behind us. Back then Arsene Wenger tried to create an equality within a squad that was built from within with young players and you could see a certain amount of sense to it. It didn’t work, because some were paid more than they deserved and others less, and the relatively high bar meant it was hard for us to move some of them on despite desperately wanting to.

But it’s not as if we haven’t had players who were more important than others who earned more than the rest. Our stars, Thierry Henry for example, was about the best paid player in the Premier League when he was in his pomp despite other teams having far more financial might at their disposal.

Yet the squad profile changed and so did the way we paid the players. We couldn’t sign Ozil and Alexis Sanchez without making them our best paid players. Their profiles and transfer fees demanded it, but the gap between them and what you might call the middle or average earners wasn’t necessarily huge.

For example, if Established, Reliable Pro 1 is on £90,000 a week and Expensive, HQ Star 1 is on £130,000 a week, it’s a difference they can live with it. If Established, Reliable Pro 1 – who has remained a consistent, solid performer – remains on £90,000 while Expensive, HQ Star 1 all of sudden earns north of £300,000 then you can see how it could become an issue. Especially if that player fails to produce performances which live up to the expectation that comes with that kind of salary (and yes, I’m taking into account the general team malaise too).

Nevertheless, that’s a reality that most big clubs have to deal with, and everyone knows that, from players to executives to fans, and if this is a thing that’s causing the major issue in the Arsenal dressing room right now then we’ve got a group whose priorities are all over the place.

I guess it doesn’t help when you’re trying to re-sign someone like Jack Wilshere by offering him less than he’s on right now, but with a heavily incentivised contract that requires him to stay fit and perform regularly to earn more. Again, I can see the sense behind that kind of an offer, but also why the player himself might be reluctant to accept it.

Ahead of tomorrow night’s game, perhaps with this story in mind, Danny Welbeck was asked if there was a split in the Arsenal dressing room, and he said:

I didn’t know about that until you just said, there’s no split in the camp. I didn’t even know about that. You’ve got to be united in these situations. Unity is strength and division is weakness in this period.

We must stay together and fight, stand up and fight, because that’s what we need to do.

The only truth these Arsenal players can provide right now is on the pitch. That’s how they’re judged. That’s all we have left, results and performances. When times are hard, you get stories about how unhappy everyone and everything is. It’s a consequence of both the situation and the media landscape which thrives on crisis at the best of times.

Much like the empty seats against Man City being reflective of where we are right now far more than the inclement weather that night, the tittle-tattle we’re hearing would be an irrelevance if we were a competitive team for whom things were going well on the pitch. And what happens there is in the hands and feet of the players and manager, so hopefully they can respond in Milan tomorrow night.

We’ll have team news and pre-game press conference updates on Arseblog News later. Also, if you’re travelling to Milan, this might be of use as potential travel strikes hit the Italian city tomorrow.