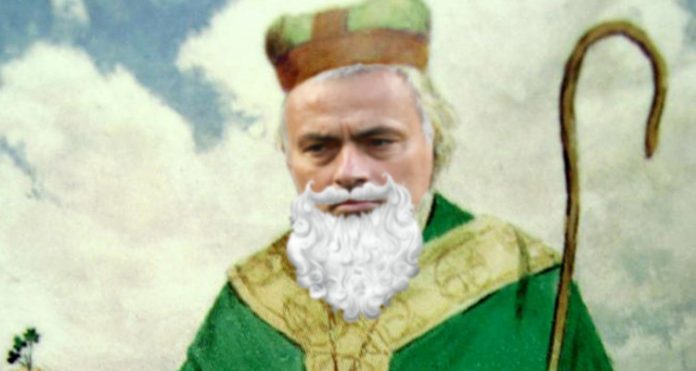 Good morning everyone. It’s St Patrick’s Day, the day when everyone in Ireland drinks their holes off – not to celebrate the man, but to try and forget what a complete twat St Patrick was.

Honestly, people focus far too much on the whole snakes thing. Sure, he drove the literal snakes out of Ireland but left us with politicians who are snakier than Bob Constrictor or Micky Maba. He was a terrible person.

Whenever he’d get on public transport, he’d play music out loud on his phone and not use headphones. He made awful smacking noises with his mouth every time he ate. He never said thanks when someone held a door open for him. When he was working in a shop he’d put the change down on the counter despite the fact the customer had their hand out waiting for it.

He didn’t cover his mouth when he coughed or sneezed. He parked in disabled or mother & baby spaces. At the cinema he’d spend the whole time rustling his sweets as well as commentating out loud on the movie and laughing in all the wrong places. He’d stick chewing gum underneath tables. After using a machine in the gym he’d never wipe it down, leaving it icky and sweaty.

After getting a message on WhatsApp he’d read it then not reply for ages even though the person who sent it saw the two ticks and knew he’d seen it. In the office he’d heat up really smelly food in the microwave then leave his unwashed Tupperware lying around so the kitchen got massively stinky.

He’d never buy a round when down the pub. He’d double-dip. He was always late for stuff, even when people told him to meet at 8 because they were meeting at 8.30 he’d still not be on time and would never say sorry. In the queue at the supermarket he’d wait until all his groceries were bleeped through and then look for his wallet.

He pronounced GIF with a J, and ‘meme’ like maymay. He would hashtag #inappropriate words in #sentences for no good #reason. He’d say ‘hashtag’ in real life before another word. He’d pick his nose and scratch his bum and sniff his fingers in public.

But the thing that annoyed the Irish people most about him was his pontificating after a poor result in the European Serpent League. This is an actual transcript of him talking to the assembled press after yet another failure.

Eventually, of course, he won it, getting rid of the adders and vipers and spud-cobras, but at that point nobody was inclined to listen to a thing he said. His already enormous ego was out of control. He’d go on barely coherent rants about the state of Ireland before he came and what it was like now, wrapped up in weak sounding philosophy:

“When I was 20 years old, I was nobody in snakes, I was someone’s son. And now, at 55, I am what I am, I did what I did because of work, because of my talent and my mentality, so they can be together. I understand that for many, many, many years it was really hard for people that don’t like me to say ‘Here he is again, he wins again’.”

Eventually the entire country, in much the same way modern Ireland has dealt with Bono, decided they’d had enough and considered him an irredeemable geebag. Shortly afterwards, he got fired. Which is exactly what he wanted because he got a huge payoff before heading off to some other country to repeat the exact some process again.

Nobody mourned him when some years later, his hubris now at levels beyond any real measurement, he was eventually taken down by a reticulated python who was having none of his banishing nonsense.

‘I don’t care if you’re St Patrick or not’, said the snake. ‘I’m going to squeeze the bollix off you then you’re getting in my bellah!’

So today, the Irish at home and around the world will drink beer and spirits to forget the time he was ever here and the indelible stain he has left on this once proud nation.

A little history and a little now