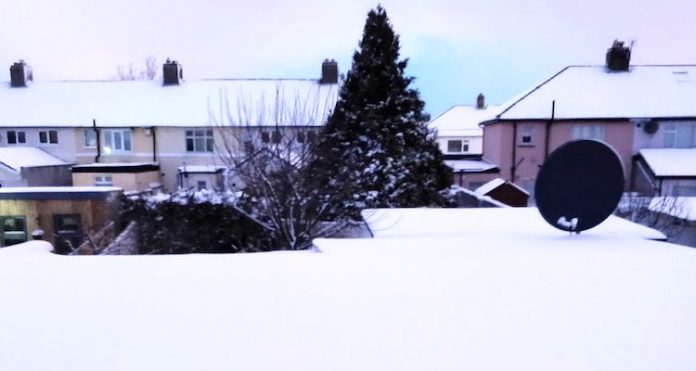 Morning all from a very cold and quite snowy Dublin. I know many of you live in places where cold and snow is the norm, but such has been the media frenzy about this temporary spell of cold weather we’re having, that there’s been end of days panic across the nation.

Supermarkets are out of bread, shelves are empty of all kinds of food, and it’s all a bit mad. It’s just some snow, like. Regular snow. Not evil snow. Or poison snow. Or zombie snow that makes snowmen come to life and do unspeakable things to you with their coal-dead eyes or carrot nose.

Apparently, according to some stories, Man City are risking Thursday night’s game by only travelling to London on Thursday and with the weather the way it is they might not make it. I guess I can see how that would happen. A light dusting of snow in this part of the world brings everything to a halt.

“There were eight flakes of snow, and I’m scared.”

Public transport is also seriously affected as these eight flakes may make roads etc impassable. In truth, it would be a surprise if the game was at risk though, but if they didn’t make it we would, apparently, be awarded a 3-0 win. Like when you get too many players sent off in a game of FIFA, but without the fun of getting too many players sent off.

It would also save us another game against City who, frankly, are about the last opposition I’d want to face at this moment in time. Having lost a final to them on Sunday, what we really need is a game against one of those teams we play quite well against. A mid-table outfit who come to our place and probably fancy their chances because of our form but being the mad team we are we actually play quite well, win by a couple or three goals (after conceding first), and the game acts as a kind of unguent to our increasingly festering wounds.

Instead, we’ve got to play a team who know they’ve got the measure of us, who didn’t have to play that well to beat us in a final, and who will probably be even more confident to have a go at us in a competition in which our motivation is probably even lower than it was on Sunday because of the league table:

Arsene Wenger will meet the press this morning ahead of the game, and it’ll be interesting to see what kind of response he’s hoping to elicit from his team. I’m sure we’ll hear the usual stuff about having to refocus and concentrate on the next game, but I’m genuinely curious as to how he’s going to try and get more from his team tomorrow than he did at Wembley.

There’s not huge scope for rotation. It’s not as if via the Europa League and League Cup matches we’ve created a competitive squad with players who are chomping at the bit for a place in the ‘first team’. This two tier group of players means the manager has to try and fashion a performance from more or less the same lot who couldn’t do it on Sunday in the Carabao Cup final.

It also feels kind of inevitable that he’ll be asked about that leaked list of potential replacements, which could be kind of awkward. Nevertheless, when you’re a manager whose team is struggling for form, is falling well short of where it wants to be in the Premier League, and has lost six games in 2018 to the likes of Nottingham Forest, Ostersund, Swansea and Bournemouth, you should expect some questions about your future.

Especially when you’re a manager who has been in charge of a club for as long as Arsene has and when there’s been such intense speculation about what’s going to happen over the last little while. As I said yesterday though, I do hope that whatever goes down, things are done in the right way and remain as respectful as possible.

The very fact that this ‘leak’ emerged so soon after the final on Sunday is telling in itself. The conversation is no longer about ‘if’ but ‘when’, and how it plays out between now and May is entirely dependent on what happens on the pitch. And look, this shouldn’t absolve the players of their responsibilities either. The manager might be struggling but it doesn’t give them an excuse for lack of effort or organisation or the pathetic, feeble defending we saw at Wembley.

It’s not enjoyable in any way to see the team like this, to endure these results and performances, or to see Arsene Wenger under such relentless pressure and criticism, but nor should we be blind to the problems we have. They won’t be solved entirely by a few good results, but they’d certainly help, and I think we could all use that.

Finally for today, huge thanks to everyone who has supported the site after our launch on Patreon yesterday – you can read all about that here. The response has been incredible and it’s so heartening to see that the way we look at online media has changed. A few years ago the idea of paying for content, or supporting publishers/creators etc, would have been almost fanciful.

Now, there’s been a shift in the way we think and it’s a real positive. There are podcasts and publications that I pay for each month because I enjoy what they do, and how they do it. It’s been helped by platforms like Patreon which make it easier for us to do that, but there’s definitely been a real change in how we think about the media/content we consume.

If you want to get on board, you can sign up on our Patreon page, and we have a full FAQ here if you have any problems. The extra content you get immediately includes a two part podcast about the Invincibles season, a chat with Tim Wheeler from the rock band Ash, and long-read article from Tim Stillman about a Friday night Arsenal won the league on goal difference.

Again, thank you all so much, and for the birthday wishes yesterday. We’ll have team news and everything else from the press conference over on Arseblog News throughout the day as we go into year 17!