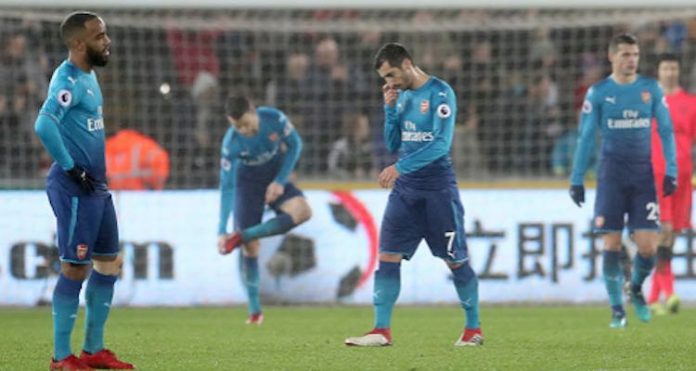 I was quite excited before last night’s game. It felt like we were on the cusp of a new attacking era, with Henrikh Mkhitaryan in for Alexis Sanchez, and Pierre-Emerick Aubameyang on the way in – even if that meant the somewhat unpalatable departure of Olivier Giroud to Chelsea.

By the end of the game, it was clear that regardless of who we bring in to play in that final third, our persistent, chronic issues in midfield and at the back will make it difficult for those guys to make the impact we want them to have. It doesn’t mean we shouldn’t bring them in, but let’s not be blind to the fact that spending £60m on a forward is not going to make a great deal of difference to a group of players that are a team in name only.

This was our sixth defeat away from home this season, and once again we’ve made lowly opposition look good. That’s not to take anything away from Swansea who were better than us, more threatening from the very start, and took advantage of their attacking situations with some real efficiency. However, they’re a team with just two wins from their previous fifteen Premier League games, and although they beat Liverpool last week, and have done well under a new manager, these are the kind of games we should be winning.

However, had it not been for crucial defensive interventions from Aaron Ramsey and Mohamed Elneny we would have been behind early on. The Welshman’s back post block was superb and Elneny – playing a weird hybrid central defensive midfield sweeper role depending on who had the ball – made a last ditch tackle as Swansea opened us up with ease. Those should have been warning signs, but as ever we paid little heed, our make it up as you go along attitude doesn’t just apply to transfers, it goes for defending too.

Then Mesut Ozil perfectly picked out Nacho Monreal, the team’s most potent attacking player over the last few weeks, and he poked the ball home well to give us a lead I’m not sure we deserved but one I was happy we had. It lasted less than two minutes, Ozil was bundled off it on the wing, Swansea had all the time in the world in midfield and the pass beyond a static Xhaka gave Sam Clucas all the space he needed to finish.

How many times is too many times for the Swiss international to switch off in midfield without him having to pay some kind of price for it? It’s been a feature of this season for him to just completely ignore, or be unaware of, danger in our final third. Can he just not spot it, or is he simply not arsed when he does? Either way, it’s a problem we continue to foist on ourselves with his selection, and it’s not offset anywhere near enough by what he gives us when we have possession.

As for the second goal, yes Monreal should have kept it in play, and maybe Mustafi should have just cleared it, but it’s 99% a terrible mistake by Petr Cech. A miskick that gave Jordan Ayew the easy task of rolling the ball into the net to make it 2-1. The manager was unhappy we didn’t keep the ball alive, I understand why, but this was bread and butter stuff and the Arsenal keeper make a mess of it.

Mkhitaryan, who had been left on the bench for no good reason I can think of, was sent on but such was the laboriousness of our play that he could make no significant impact. Lots of passing, the most sterile domination in terms of possession (894 passes to Swansea’s 307), summed up by the fact that they had 12 attempts on goal to our 9, and we played sideways, tedious, one-paced, unadventurous, risk-averse, crab football that was about as threatening as puppy barking at itself in a mirror (although nowhere near as cute).

Olivier Giroud, despite being on his way to Chelsea, was sent on but he couldn’t do anything either. Ozil made more passes than anyone else but with nobody willing to take any kind of chance with movement or a change of pace, he was rendered more or less useless. Hector Bellerin got up and down the right hand side, ploughing a lonely furrow once again as we bemoaned his inability to somehow affect our attacking play while never giving him anybody to link up with.

The centre of midfield was that in name only. There’s no structure, no partnership, no platform from which to properly build a game. And by that I mean have an impact on the opposition and make them work hard instead of providing them with a nice training exercise which shows that if you stay compact and relatively organised this is an Arsenal side which simply can’t hurt you.

Crabby, crabby, crab football. Scuttling left and right and right and left and oh shit someone has taped up our pincers. We’re awful to watch, we have been for some time now bar the odd occasion where everything clicks, and there wasn’t one part of me last night that expected us to get back into the game when we went behind because we have all seen this movie before and we know how it ends.

Still, there’s always our ability to inflict more humiliation on ourselves. Mustafi, who had one of those games where he looks like a bloke from the crowd who’s been thrown a pair of boots and told ‘Just do your best’, got the runaround from Ayew, who drove to the byline and pulled the ball back for Clucas to make it 3-1 as the rest of our defenders just stood and watched.

It was like Crystal Palace last season after which Theo Walcott said they wanted it more than us and was immediately sent into semi-permanent exile for the rest of his Arsenal career. He wasn’t wrong though, was he? As much as I hate to deal in intangibles like ‘wanting it’ and ‘desire’, you can see when a team isn’t up for it, and that was us again last night.

You can see when a group of players know what they’re supposed to be doing and work together to make that happen, and you can see when they don’t. Last night we didn’t, or we did know but just weren’t bothered enough to do what we were supposed to. Either way, it’s a reflection of the manager and his ability to get them playing.

Arsene Wenger is a fantastic, intelligent man who has done wonderful things for this football club, and is someone I will always hold in the highest regard. But he’s now a manager struggling, very obviously struggling, to fashion his players into anything that looks like a real team. Last night’s defeat was not something we can put down to an accident, or blame on individual mistakes. At some point, when players continuously make errors which cost us games and points, you have to look beyond the individuals and ask why it keeps happening.

Nothing that occurred last night was a shock or a surprise. This is the new normal, and frankly it’s not good enough. We can point the finger at this player or that player all we want, but it’s a fruitless exercise because the issues go far, far beyond them. We have good players, hard as that might be to admit at the moment, but our problem is we have a manager who can no longer get them to do what he wants them to.

There is only one solution. It’s not to sell 25 players and give Arsene Wenger a clean slate to work with. It’s to find a new manager to get more out of the players we have, and until such time as we do that, we’ll continue to lurch from an ok performance to a terrible one, picking up points here and there, perhaps getting ourselves up for cup games because of their one off nature, but until the big change happens, this is what we are and this is what we do.

I don’t even know what to say anymore, other than I’m glad that without Alexis Sanchez we’re finally able to play that freeflowing attacking football again.

Oh, and that Arsenal, with ambitions of being in the top four and getting Champions League football again, have conceded more goals this season (34) than bottom club West Brom (31). Lovely.

As for the rest of what happens today, Giroud could go to Chelsea for £18m, Aubameyang could come after his arrival at the training ground yesterday, there’s some loan moves on the cards and possibly a departure for Mathieu Debuchy. We’ll have a transfer deadline day live blog over on Arseblog News, so feel free to join us for that until 11pm tonight.

Better get some bourbon in, I reckon.