It may not have escaped your notice that Alexandre Lacazette has not scored for Arsenal for some time now. 9 appearances ago to be precise, when he slammed the ball past David de Gea against Manchester United in November.

There is so much focus on individuals in modern football consumption and the arrivals of Alvaro Morata, Romelu Lukaku and Alexandre Lacazette into the rosters of 3 of the Premier League’s top 6 clubs made them ripe for comparison.

As such, the three have constantly been set against one another in the never ending game of Top Trumps playing out on social media. But all three strikers have hit fallow patches of late. They have probably suffered physically from being asked to lead the line at elite Premier League clubs and Lacazette has been no different.

The manager’s insistence on managing his minutes carefully in the early part of the season caused supporters to clack their tongues in irritation. But it stands to reason that Lacazette took time to adjust to the physical demands of the Premier League, having spent his career to date playing in his back garden at Lyon.

The struggles of the Frenchman, Lukaku and Morata also illustrate a depressed striker market. The superclubs have stockpiled the planet’s big ticket attacking talent. This trio of strikers have been studied closely and passed up in summers past by big Premier League sides. Yet United, Chelsea and Arsenal had a need for a centre forward last summer that prevented them from being too choosy.

Nevertheless, Alex started life reasonably well at Arsenal. Even if he was a little up and down at times and his goalscoring record in North London was far more impressive than it was away from home. However, his goals have totally dried up since that emphatic close range finish against United. So why has he started to toil so much in front of goal?

The truth is that a large portion of the blame can be attributed to those behind him. The Frenchman has not exactly been missing gilt edged chances, save for perhaps one against Chelsea where a slight hesitation saw Courtois foil him. He hasn’t stopped looking to run in behind either. He has had to adapt to the fact that the Gunners struggle to stretch teams- especially since there are 12 to 13 sides in the division happy to set up very defensively home and away against the top 6.

Arsenal rarely win penalties, not because of some grandiose refereeing conspiracy theory, but because they rarely make centre halves chase backwards. (Had they won one or two more, Lacazette’s goals column would look a little more impressive). Indeed, much of the time, there is very little room behind opposing centre halves that tend to pitch their tents on the 18 yard line. This has become more of an issue for Lacazette since Aaron Ramsey was injured. 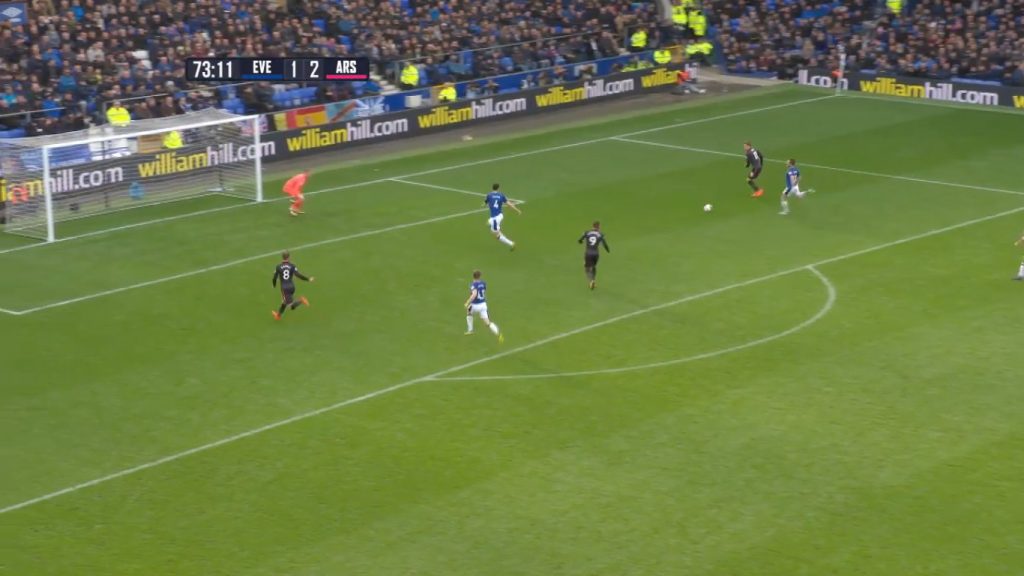 The Welshman provides Arsenal’s strikers with support with his running from deep, as we see in the image above. Ramsey’s run takes an Everton defender away from Lacazette, leaving him extra space to finish. Lacazette’s last goal for Arsenal was assisted by a cool cushioned touch from Ramsey who had run ahead of him. Ramsey’s ‘second man’ runs help to occupy defenders.

Without Ramsey, Lacazette has become easier to shackle. Few of his teammates share his enthusiasm for running in behind defences. Arsenal’s football has become more pedestrian, a procession of chin stroking side to side passes. Alexis Sanchez could hardly be accused of conservative passing, yet he and Lacazette have not entirely hit it off either (which is, admittedly, no longer an issue).

Alexis likes to clip balls towards the back post, whereas Lacazette prefers to bump short, quick combination passes off with his attacking colleagues. The Chilean is not a one or two touch player and it has jarred slightly with Lacazette’s MO (or MÖ?). None of Laca’s 8 Arsenal goals to date has been assisted by Sanchez- unless you count this effort– a rebound from an Alexis free kick against West Brom. Put simply, Arsenal have struggled to slice teams open recently and Lacazette is suffering from a lack of service.

In recent weeks, he has taken on a kind of decoy role at centre forward, a function he has actually served pretty well. He teed up Alexis Sanchez at Selhurst Park, drawing defenders towards him to free up space for Sanchez to shoot. Lacazette has a slightly better relationship with Mesut Özil, who has been missing for precisely 1/3 of the mini drought.

The link-up between the pair for Özil’s goal against Liverpool is promising for the remainder of the season. This goal shows how Mesut is more attuned to Alex’s wavelength. But Özil’s fitful availability has prevented that relationship from truly blossoming, which has been especially damaging for Lacazette whilst Ramsey has been sidelined. Alex briefly enjoyed playing with Danny Welbeck at the start of the season.

Welbeck behaved more like a second striker, which suited Lacazette’s game. However, the team has become very unsettled around him and Welbeck is currently playing as though on roller skates. Kolasinac’s injury means there is one fewer player looking to attack the by-line and feed him in the penalty area, Maitland Niles is much more inclined to check back onto his right foot and clip the ball towards the back post. It’s a similar sort of unrequited service provided by Sanchez.

Arsenal have a heavy left-sided bias, largely driven by Alexis. While Lacazette and Alexis have not quite clicked, the presence of Kolasinac at least offers up the hope that Arsenal might work the ball to the by-line for a cut back. This avenue has also been closed off on the right hand side with Hector Bellerin totally lacking a partner to combine with, which normally prevents him from moving into an opportune position on the by-line. Look at how many of Olivier Giroud’s Arsenal goals emanate from cut backs.

The Frenchman’s running has been useful in laying the groundwork for others to score on occasion. But his teammates have not been as generous to him in return. Indeed, Lacazette must have looked on in envy as the very few defence splitting passes the Gunners have played recently have benefitted teammates. Wilshere’s gorgeous clip to Alexis at Selhurst Park and Iwobi’s slide rule pass to Bellerin at Bournemouth spring instantly to mind.

Those goals aside, few of Arsenal’s efforts in the last 6 to 8 weeks have been the product of incisive build-up play. Bizarrely, Lacazette’s teammates seem to have developed an aversion to servicing his runs in behind. At Bournemouth, he makes a fairly routine run into acres of green space (see image below). But Xhaka instead opts to play the ball to Wilshere. 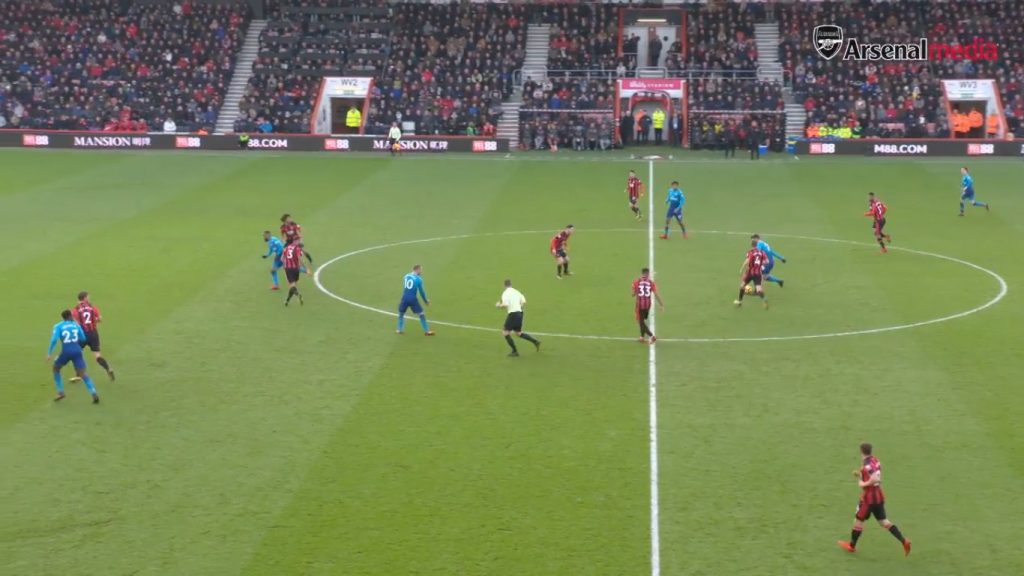 It could be that Lacazette’s teammates are adjusting to the runs that he makes, but as we approach February, that adaption process ought to be more mature than it is. The truth is, lately Arsenal have lacked imagination in their passing and penetration in their running. Ramsey’s return, Özil becoming more reliable selection wise and maybe some new attacking signings ought to help the £50m summer signing out of his rut and into a groove.