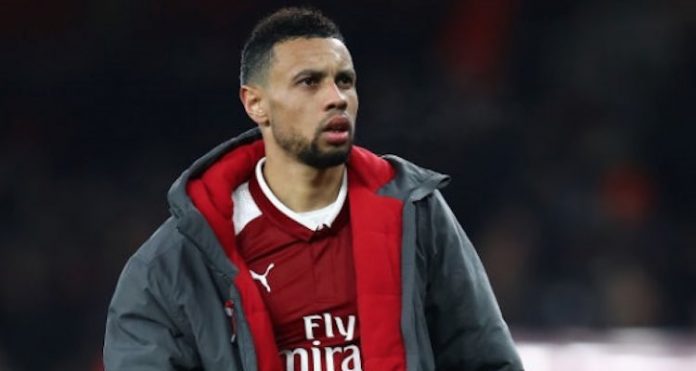 Almost exactly one year ago, Francis Coquelin signed a new contract with the club. Along with Olivier Giroud and Laurent Koscielny, he put pen to paper on a long-term deal which saw his wages rise considerably – somewhere in the £100,000 a week bracket.

It was the kind of deal which a manager gives a player he sees as important, securing their future and illustrating that he views them as a key member of the squad. Fast forward 12 months and he’s now considered surplus to requirements. The change of formation played a part in that, as Arsene Wenger explained before the Nottingham Forest game, but he credited Coquelin’s professionalism and said he was an example to other players.

It suggested that the 26 year old would be involved in the FA Cup tie, but when the squad was announced he wasn’t in it. It raised eyebrows, because there was no injury, and yesterday stories emerged about interest from West Ham and Crystal Palace. Later in the day, reports from Spain said that Valencia have been negotiating with Arsenal for weeks about a possible transfer, and it seems likely that the midfielder will be on his way sooner rather than later.

Now, I’ve never been one of those who viewed the Frenchman with great disdain. I think he a limited player, but honest and one who always tries hard – even when the instructions given to him were always going to exacerbate the flaws in his game. But a year ago, the manager saw him as a crucial part of the future, as the new contract indicated.

This season he has played a total of 156 minutes in the league, has become – like Theo Walcott – an afterthought when it comes to domestic games, and the majority of his playing time has been in the Europa League and Carabao Cup.

Now, if Arsenal want to sell Coquelin, I’ve got no big issue with that – especially if we are going to replace him with a new signing (hahaha!). In the past there have been times when we’ve been far too slow to move on players, and often that’s because of their contracts. It’s difficult to move players on big wages, which is probably why the £10m fee that was being bandied about yesterday seemed low, especially in the current market. It’s likely because the shortfall in fee has to be made up his salary package.

But what does it say about the way we manage our squad, and the way we plan for the future, that a player who 12 months ago was put into a wage bracket not that far behind our biggest earners is one now we’re happy to let him go? What does it say about Arsene Wenger’s judgement that terms like that were given to a player who a few months later became completely marginalised simply because of a formation shift?

It does raise the question as to what we do to replace him. I know he hasn’t been playing much, but at least his presence gives the squad some depth in an area which requires it. In Jack Wilshere and Aaron Ramsey we have two fantastic talents but whose injury records insist that there’s cover behind them.

Are we looking to buy somebody, or have Ainsley Maitland-Niles performances convinced the manager that he’s ready to step up and play in there as and when it’s required?  I’d put more money on the latter than the former, despite his insistence that the club will be doing business during the January window. ”

“Will we be out there to do something?,” he said after the Forest game. “Yes we will.”

And yet what we seem to be doing is trimming. Rumours about a January departure for Alexis Sanchez have intensified over the last few days, and while I can see it from both sides, unless we sign a replacement we weaken ourselves considerably if we let him go. Even with his form well below the high standards he’s set, he’s our joint leading goalscorer, and this is a team with too far few of those at this moment in time.

Theo Walcott is another who could be on his way out. He certainly played like a man with one eye on the exit door in his last performance, and last season’s 19 goal man has barely played 45 minutes in the Premier League this season. That tells you everything you need to know about how he’s viewed by Wenger. On the off-chance that he becomes a requirement again, don’t be taken in by any PR about how he’s always been someone in whom he’s had faith, because it’s blindingly obvious that’s not the case.

On the incoming side of things, the only named we’ve been linked to is West Brom defender Jonny Evans, a man currently pursued by both ourselves and Man City. I don’t believe for one second his Old Trafford past would preclude him from signing up with the champions elect, and if it comes down to a straight choice, why would he come here instead of going there?

Evans is a solid, if uninspiring player, but such is our situation right now that you could see how he’d be a decent purchase. Per Mertesacker is retiring at the end of the season and looks like a man struggling when he does play every so often; Laurent Koscielny continues to battle a chronic Achilles problem at the age of 32; and our two young English central defenders – Rob Holding and Calum Chambers – look like players badly in need of guidance and education. Like so many young defenders – young players even – at this club down the years, they’ve hit a wall and look incapable of getting beyond it right now.

So, in these circumstances you could make a good case for a player like Evans, with plenty of experience, who has played in title winning sides, to come in and bolster the squad, and yet I’d say our chances of signing him if City are really interested are slim. Not to mention the fact that it feels a bit desperate. We did try and get him in last summer, but that would only have been done if we’d allowed Shkodran Mustafi the move he reportedly wanted.

When you add to this the fact Wilshere, Sanchez and Ozil are out contract in less than 6 months; we have a clutch of players who are heading towards the final year of their own deals and others who are basically surplus to requirements; not to mention a squad whose age profile needs to be looked at very closely, there is a huge amount of work to be done over the coming months, and you have to ask is Arsene Wenger the man to do that work.

On the Arsecast Extra this week we discussed the manager’s future, and my opinion is this will be his last season, one way or the other. It means that what happens this month has to be done very carefully. We have started to put in place the structures that will support a new head coach, but decisions made this month are ones that new man is going to have to deal with whenever it is he takes over.

May you live in interesting times, as the saying goes, and for years Arsenal have been solid, consistent and a bit predictable in terms of what we do and how we do it. Which isn’t necessarily a bad thing – you could see how we were going about our business, and what we might need to do to improve.

Now, it’s much more difficult. We are juggling so many balls at the one time that it feels hugely unstable. I realise, of course, that poor results do tend to colour our view of things. When you play poorly and lose games, the world appears like you’re looking at it through hind-quarters brown spectacles, and a few good results and performances would make things a bit better.

But right now, there’s so much to do, so much that could happen, and so much that should happen, that it’s impossible not to worry about how we’re going to get through it all, and where we’ll be when we get finished.

This could be a very eventful month, in more ways than one.