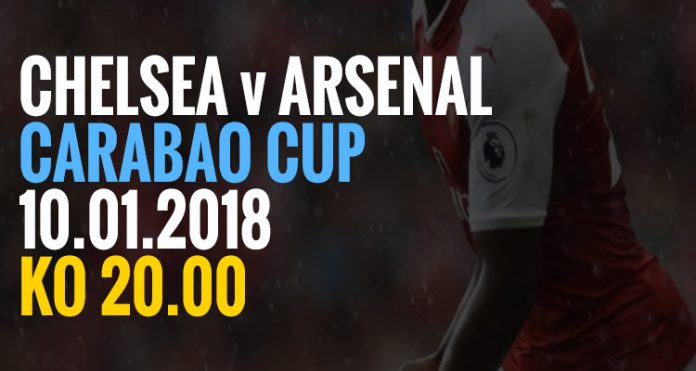 We go from one cup to another with a Carabao Cup semi-final first leg against Chelsea at Stamford Bridge tonight.

Having rotated considerably for the game against Nottingham Forest, the manager is likely to go stronger tonight, although injury problems will dictate his side to a large extent. At his pre-match press conference yesterday, he said there would be ‘nobody’ back for this one, which means we’ll be without Laurent Koscielny, Aaron Ramsey, Olivier Giroud, Sead Kolasinac and Nacho Monreal.

Francis Coquelin’s imminent move away – something Wenger more or less confirmed – will preclude his inclusion. I’m told that Mesut Ozil will miss the game because of a knee problem, while there will be fitness tests for Granit Xhaka and Shkodran Mustafi. Hardly ideal preparation for a game against a team as good as Chelsea.

Then there’s the Alexis Sanchez situation. Whether he plays or not will be interesting, and it may well give us some insight into the club’s thinking about him. He was, reportedly, the subject of a £20m take it or leave it offer from Man City yesterday, and even before that happened Wenger said he was unsure if he was going to use the Chilean tonight.

If he doesn’t start this game, I think we can draw some conclusions from that, especially when you consider we’re hardly replete with options and goalscorers right now. A little more on his situation anon, but tonight is going to be difficult enough as it is, and the needs of the team should come first. For me, he starts, regardless of what else is going on.

This is the first leg, of course, and the manager believes that might have an impact on the kind of game we see later on:

I believe it can be a very attractive game, but football is so unpredictable it can as well be a locked game, where both teams know each other well, they know they have 180 minutes to win the tie, so both things are possible. It can be a crazy game, but as well it can be locked.

You want to go there, be solid and try to take advantage of every mistake, of every weakness, to win the game. We also know there is another game after that, and we need to be solid defensively too.

That last part is, for me, the key issue. Defensive solidity really isn’t our thing. It hasn’t been for some time now. When we played Chelsea last week at the Emirates, we had Petr Cech and a masterclass of shite finishing from Alvaro Morata to thank for not taking an absolute pounding based on the chances we allowed them. You can only get away with that for so long, and when you look at what Championship Nottingham Forest did to us, it’s hard not to be wary about tonight’s encounter.

It’s cup football and anything can happen, but I find it hard to see us coming away from Stamford Bridge with a win. If we can get a goal, and remain within touching distance so the second leg is not a foregone conclusion then I think I’d take that. Regardless of the stature of this competition we’re a couple of games away from a Wembley final, so it’s one that should be taken seriously.

It’s whether we can match our seriousness with a performance of the requisite quality that’s the question. I hope we can.

Meanwhile, the Alexis stuff has certainly got people exercised. I asked people on Twitter what they’d do with the Man City offer, and it’s a relatively even split but with a small majority in favour of taking the money now – it currently stands at 57% – 43% to cash in.

City make take it or leave it £20m bid for Alexis. https://t.co/wnSo2gEv6h

It’s a complicated situation. We can take some cash now and put it towards a replacement, or we watch him go there on a free transfer in the summer, get nothing, and still have the job of buying somebody else. Some have pointed out that Alexis himself might want to wait until June, as his signing on fee would be considerably higher because of the Bosman move, but my suspicion is that if the opportunity was there now he’d pack up and go.

So, do you keep a player who is so willing to leave? Has he, as some rumours said, been a destabilising/toxic element in the dressing room? I can see that argument. On the other hand though, what does £20m get you in this market? And on top of that, what can you do with £20m in January, when the pool of available talent is always smaller than it is in the summer window?

Can a team as short on quality up front as Arsenal afford to lose it’s joint leading goalscorer and one of its most productive players? How on earth do we replace him this month if we do decide to cash in?

Personally, at this point my inclination is keep him. I don’t think we’ll find anything in the market that will fill the gap if he goes – not unless we’re willing to spend BIG money, and I’m not sure that we are. We made a decision in the summer, and we should stick with it. It’s not ideal, but I just can’t see how losing Sanchez, when we still have the Europa League to play for – with its path into the Champions League – does us any good.

I fear, however, that we might take the money. Our stance last summer was consistent throughout the off season, insisting he would stay, and we then showed that was all a big load of bullshit when we sanctioned his move to City but called it off when we couldn’t get Thomas Lemar from Monaco in time because of our poor planning and indecisiveness.

We could have had £60m for him back then, and City’s £20m is about as good as it’s going to get. Why would you, even if you had all the money in the world like they do, pay any more when you know you can have him for nothing in a few months? They have the league sewn up already, they don’t need him for that, and unless Guardiola sees him as key component as a push for the Champions League I don’t imagine they’ll go any higher.

In short, it’s a mess, but Arsenal do have control over it. They can stick by their guns and keep a player who guarantees some goals and assists between now and the end of the season. But really, your guess is as good as mine as to what will happen between now and January 31st. Maybe we’ll get an idea tonight from his involvement or lack thereof.

Right, that’s your lot for this morning. Join us later on for a live blog of the game, and all the reports, player ratings and the rest over on Arseblog News.