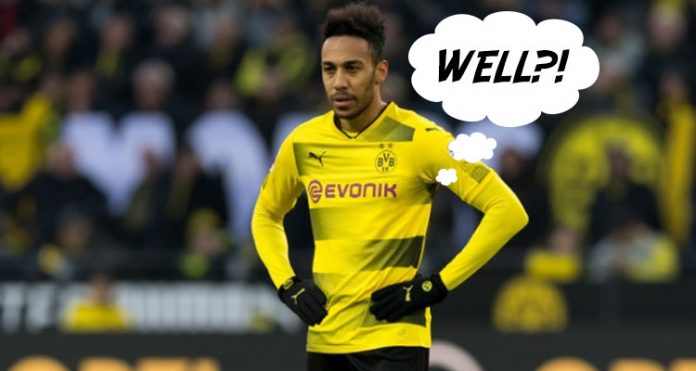 Morning, a very quick Sunday round-up for you.

The only game in town is still Pierre-Emerick Aubameyang, with our pursuit of the Borussia Dortmund striker not dead yet despite the fact he played for them in a 2-2 draw with Freiburg yesterday. For many, that would be seen as the door being well and truly closed, but before the game they released a statement saying they’d still consider a transfer deal but only on their terms.

We are prepared to implement a transfer under certain parameters – but only if these parameters are fully met. Arsenal has started several attempts so far, we have rejected all so far.

Either our demands are fulfilled, then there can be a transfer, or else they will not be fulfilled and Auba will play in Dortmund until the summer.

This has been discussed and accepted by the Aubameyang family.

So, it would be fair to say, the ball is very much in our court. They will sell, but they won’t be bargained down from what they want. You can understand why – they realise that a great chunk of money won’t score them any goals this season (£30m *cough*), and we’re trying to sign their best goalscorer from them with very little time for them to find a replacement.

Why would they, or why should they, make life easy for us in any way? Just because we’re Arsenal? For any spurious reason you can think of? Of course it’s a negotiation but they hold a strong hand and we, frankly, do not. Regardless of the player’s intentions or desire to come to us, we still have to pay them what they want – or something very close to it, simple as that.

Our desire to sign him has been made very public. You don’t send your Chief Executive, Head of Recruitment – a former Dortmund employee, no less – and your Contract Bloke to Germany unless that’s what you’re trying to do. And yet, they did not. Our negotiating style appears to be start low then continue with small increments as bids are knocked back.

When a club is more minded to sell a player than keep him, it can work:

Aubameyang deal increasingly looks like a bit the Xhaka one. BMG couldn't believe how low some of the figures AFC proposed were early on. AFC ended up paying full whack, eventually….

However, when you’re dealing with a club who don’t have to sell a player and who would be quite happy to keep the potential target, then I’d suggest that kind of thing could get really annoying, really quickly. All the same, there’s an oft-used saying in football about every player having his price, and that’s true.

If you really want the player, you pay that price, you get the player. Now, with a little over three days left until the transfer window closes, we’ll see if Arsenal are willing to do that.

Also, when people talk about value for money, I don’t know how on earth we assess that in this current market. Prices are ludicrous at every level, but what Dortmund appear to be looking for for a 28 year old striker who has a superb goalscoring record doesn’t seem out of the ordinary really.

Maybe we’re judging by our outgoing business. £12m for Coquelin, £20m for Walcott, but perhaps we’re the ones selling lower than we should rather than that being representative of the true cost of players these days. Anyway, we don’t have too long to wait to find out what we’ll do with Aubameyang, and thus what our squad will look like for the second half of the season.

There may well be some other business between now and Wednesday too, with some loan moves for young players, and the departure of some fringe figures. Mathieu Debuchy has made it clear he wants to leave, but links with West Brom were denied yesterday by Alan Pardew. We have our eye on Jonny Evans apparently, but the former French international is not going to be used as a makeweight in that deal.

And on that exciting note, I’ll leave it there for today. If you have a bit of spare time, there’s a nice piece on the official site with Arsenal’s seven young debutants this season talking about their progression into the fringes of the first team, their ambitions and more. We all realise that the success rate for young players is small, but they all seem to get on really well, and it’s an interesting watch. Check it out here.

Till tomorrow, have a good one.