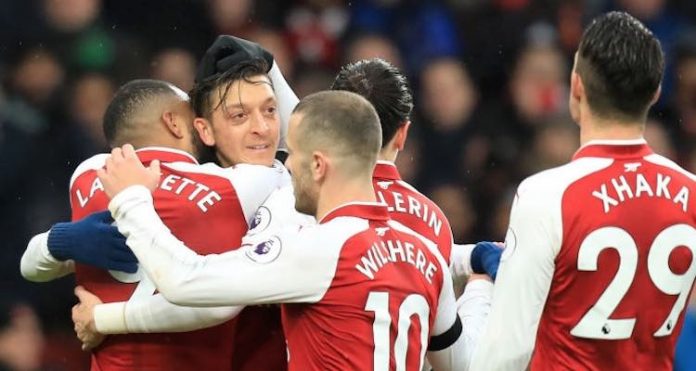 It’s amazing to think that the last time we won a game was on December 28th 2017, and coincidentally it was against the same opposition. We beat Crystal Palace 3-2 at Selhurst Park that night, but yesterday at the Emirates there was no comparison in terms of performance or how emphatic the victory was.

Four goals in the opening 22 minutes was the kind of blitz that no team could recover from, and the game was won at that point. It might have made the rest of it a bit pedestrian, but if you ask me to opt between cruising at 4-0 up and being involved in the kind of game that we’ve seen too often this season, there’s only one choice.

Arsenal won a corner after the keeper saved an Iwobi shot, Granit Xhaka curled it to the back post and there was Nacho Monreal on his comeback from injury to nod it home from close range.

Arsenal had piled on the pressure, Iwobi went down it the box leading to shouts for a penalty, but he got up and when Monreal pulled the ball back from the byline he was there to poke it home and double the lead.

Another corner, again Xhaka curled it to the back post, Monreal kept it alive and nodded it back across goal and Laurent Koscielny was there to bundle it home.

The pick of the bunch, no question. Ozil played one-twos with both Iwobi and Wilshere, driving towards the box, before rolling the ball behind him into the path of Alexandre Lacazette. The keeper got a touch but it didn’t really take anything away from what was a beautiful move and a lovely goal.

It’s one that the Frenchman really needed and it showed extra dimension we have to our attacking play when the German is in the side. With Sanchez now all but confirmed as a Manchester United player, it’s so important that we do everything we can to get him to stay. Hopefully the arrivals of Henrikh Mkhitaryan and Pierre-Emerick Aubameyang is the kind of injection of talent he needs to convince him, but on top of that we have to make him an offer he can’t refuse from a financial standpoint too. We just can’t afford, from a sporting point of view, to let a talent like him go if we can help it.

The only real negative from yesterday was the departure of Nacho Monreal through injury. Afterwards Arsene Wenger said it was precautionary, having taken a kick on the hamstring they didn’t want to risk him, so fingers crossed he’s not going to be out for long. His contribution – a goal and two assists – was outstanding, and it looks like the manager has decided to go back to a back four and he’d be an important part of that.

Tellingly, when he did go off, it wasn’t Sead Kolasinac who came on, but Ainsley Maitland-Niles. I know the Bosnian has had a bit of an injury, and maybe that’s what informed the decision, but it’s hard not to wonder what’s going on when your left back goes off and your other international left back is left on the bench as an inexperienced midfielder is preferred in that position. I know Maitland-Niles has been promising there, but it’s a bit of an odd one all the same.

Although Palace got a goal back late on, the result was a foregone conclusion, and in itself that was enjoyable. Sure, you don’t get that little burst of relief and happiness at the final whistle as you do when you see out a single goal lead, but in the context of our season I much preferred this way of winning a game.

I think we started well, we played well and played the kind of football we want to play and we know we can play when everybody is focused and in a good shape. Overall, we had a very convincing first half. The second half was of good quality and it’s always a bit human that you have not exactly the same drive in the second half. It was a convincing win.

Was that a little dig there about everybody being focused? Perhaps, but I don’t buy into the idea that we suddenly played like this because we didn’t have Alexis Sanchez in our team. If that were true we wouldn’t have lost to Bournemouth, right? But people will make that observation regardless of its veracity.

It’s also somewhat typical of the culture we live in that people will choose to focus on an irrelevant negative, instead of the positives from the day. They’ve been far too infrequent this season and we should enjoy them while we have them. Obviously four goals, the contributions of Monreal and Ozil, and a convincing win were paramount, but I want to give some props this morning to Alex Iwobi.

There’s no doubt he’s been off the boil a bit this season, and like any player who doesn’t play well he’s open to criticism. At the same time, he’s a 22 year old academy graduate playing in a team which we all know has problems that go way beyond him. Even a world class talent like Sanchez has had trouble this season, and if you want to put it all down to the fact he’s been unfocused or had his head elsewhere fine, but I think we all know that’s just part of it.

Yesterday, Iwobi scored a goal (to add to the assist he got last weekend), looked dangerous throughout and tellingly, his defensive contribution was excellent. He was caught with his pants down a couple of weeks ago, but his reaction to that has been to work harder and while not excusing his behaviour, it might well be that the manager has dealt with this situation pretty well by not ostracising him.

I think some of what has been leveled at Iwobi this season has been unfair, and I was delighted to see him put in the kind of performance he did yesterday. He will, hopefully, face even stiffer competition for his place if those much-touted new arrivals get done, but maybe we’re seeing a player who can rise to a challenge, and not sink under the weight of the pressure and criticism he’s faced.

Right, that’s your lot for this morning. Have a very pleasant basking in the three points Sunday. Back tomorrow with more and an Arsecast Extra.