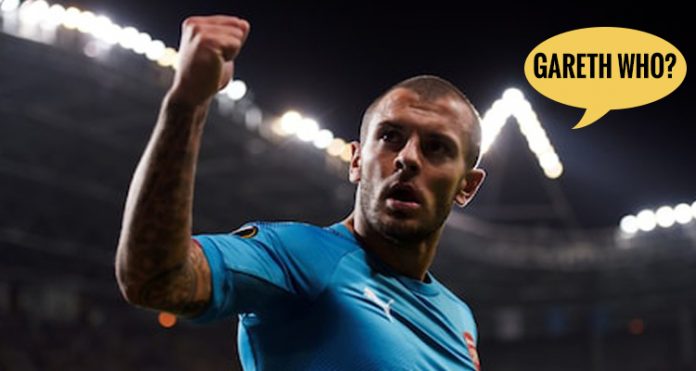 I was halfway through a blog post this morning which was a kind of sketch about ‘Little Jack’ and ‘Gareth Mouthgate’, touching on the England selection situation which our man Wilshere finds himself in. 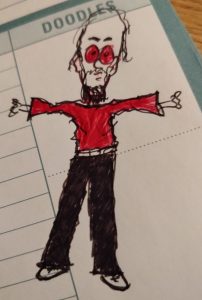 I wanted to convey the personality vacuum that the current England manager has, and I did it so well that after a couple of hundred words I was so bored I wanted to jump into a patch of nettles just to feel something again. In the end the best thing about it was using this doodle to your right.

That was not a representation of Wilshere or Southgate, but an illustration of how, if the latter were a notepad in a human he’d have to be a blank one because drawings like that add some life to things. You can see why the nettles now seemed like a good idea. I also have no idea why I made him a notepad either, rather than something more mundane like a mat of some kind, or one of those little plastic things people have under their doors to keep the breeze out.

I’m ok with Jack not playing for England in this window, by the way. I’m sure he’d like to, and I’m sure England could use him, but it means one of our players has a nice rest during the Interlull and won’t get injured or anything.

I mean, I know Jack could do his back in putting the bins out or something, but he’s more likely to get crocked by some opponent as he goes in for a 50-50 which is more like a 10-90 and then he ends up sidelined for weeks/months and we begin the whole process of getting him match fit again. Something which seems to be going pretty well, in fairness, and I’m ok with the manager using him in the cup competitions to build him up to the point where he can be considered for the Premier League.

So I then decided to go to NewsNow to see what was stirring this morning and I saw some headlines asking ‘Are Arsenal keen on Bobby Duncan?’. I had no idea at that point who Bobby Duncan was, so I clicked the link and got this from ESPN: 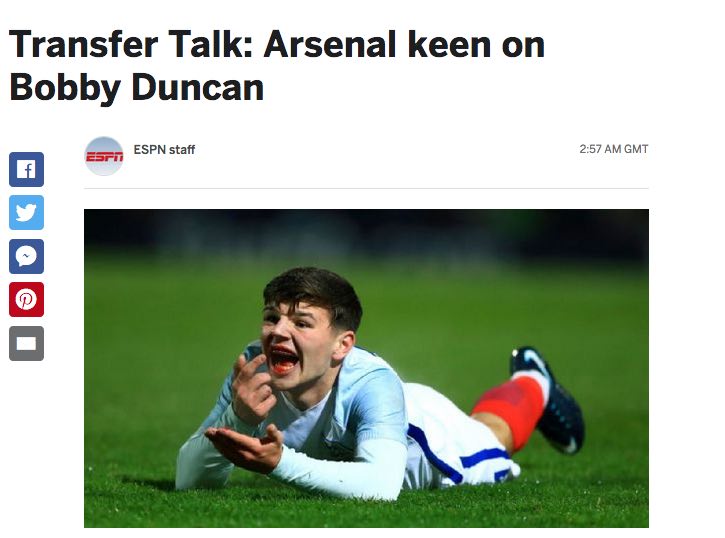 I am now terrified of Bobby Duncan. I’m sure he’s a very nice young man but that is a picture which will haunt my dreams forever. I know, he’s got injured in his mouth and that’s not a nice thing to happen to anyone, but there’s just something really sinister about this picture.

I know I’m going to wake up screaming one night having been pursued down a dark street by Bloodmouth Bobby. I can’t see him, but I know he’s there. I can hear his shuffling footsteps, as he lurches behind me in the darkness. I keep turning my head to see if I can catch a glimpse of where he is, as my own momentum becomes halted. For some reason my feet are sticking the ground, I can’t get up any speed, my legs are heavy. The putrid air is burning my lungs and I know he’s coming to get me.

There’s a moment of silence, shattered then by a high-pitched shriek – like a vampire piglet having its tailed pulled – and from the darkness he emerges, arms flailing, running with enormous leaps and strides towards me, blood spewing from the hole in his face that used to be his mouth but now looks like Predator or something. I will probably do a wee down my leg (in my dream). Then I wake, lying there in the darkness for a couple of minutes and know that the dream may have gone but he’ll be back another night.

I could be overthinking this, but I hope we don’t sign Bobby Duncan. I wish him a happy life and career, just not with us.

Olivier Giroud scored for France last night – goal here – as they beat Wales 2-0. Those people who say the Interlull doesn’t provide action and excitement will have to eat their words now. Not even cooked words, they’ll have to chomp them raw with the peel still on and fresh from the earth. That’ll teach them.

There’s a massive band of rain coming in from the west this morning, which is due to hit Dublin in a couple of hours, so I’m going to have some breakfast and get out with the dog while it’s still relatively dry.

Join me for more fun and games tomorrow, and if you still haven’t check out this week’s Arsecast with Dara Ó Briain, you can listen here. Have a good one. As the old Irish saying goes, ‘May all your mouths remain free of blood’.